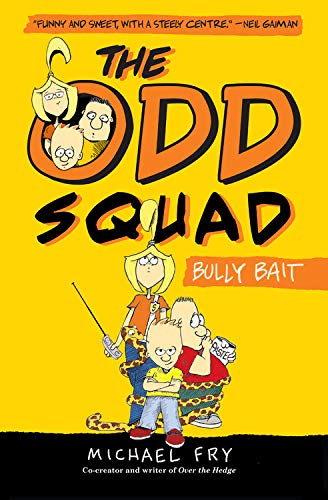 “If laughter is the best medicine, Bully Bait provides a welcome dose.”

What could be worse than being stuffed into your locker almost daily by the meanest bully in the school?

Maybe it’s being assigned to the school safety patrol with two other losers, also outcasts.

Nicholas is short, but he makes up in wit what he lacks in height, which is the saving grace of cartoonist Michael Fry’s Bully Bait, the latest book in the Odd Squad series. The cartoons scattered throughout the pages are witty, too.

Nicholas is being bullied by Roy, a hulking fellow seventh grader who makes Nicholas miserable with his constant harassment, usually climaxed by stuffing Nicholas into his locker. Since he doesn’t have any friends to complain to, Nicholas turns to his readers, relating his misery and confiding his lack of confidence in social settings.

Middle school readers will undoubtedly identify with Nicholas’ angst, especially when he gets assigned to the Safety Patrol Club, a refuge for two other misfits suffering from what his principal calls “peer allergy.”

The club of three is taken under the wing of the eccentric, mysterious school janitor who encourages the trio to stand up for themselves. They get deep into some serious mischief until they learn a secret about Roy that makes them think twice about exacting their revenge.

Bully Bait is a raucous tale about surviving bullying, finding allies, and learning to accept oneself as a work in progress. If laughter is the best medicine, Bully Bait provides a welcome dose for youngsters dealing with the emotional stress of finding a safe social niche in the calamitous world of middle school.