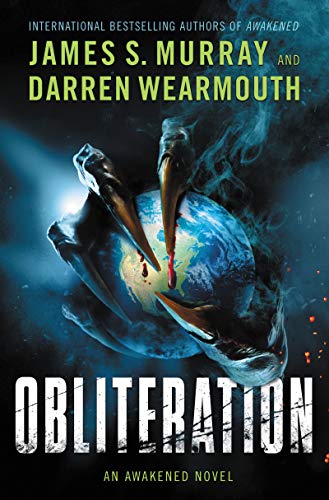 “With a rapid-fire description that leaps from victims’ viewpoint to that of their defenders, Obliteration gives a masterly account of the determination of human beings to survive against unbelievable odds.”

Three years ago, Mayor Tom Cafferty realized his dream with the opening of the Z Train connecting New York City with the towns across the Hudson River. Moments afterward, he is fighting for his life as something deep in the tunnels attacks the train and everyone at the ceremony.

Cafferty survives that event and briefly bests the creatures, only to discover a worse monster in the person of Albert Van Hess, the man behind the Foundation for Human Advancement.

Van Hess practices a unique form of extortion, demanding “protection money” from the governments of the world in exchange for preventing the monsters from destroying their cities.

With a twisted logic; he wants to destroy the creatures but—he also decides to purify the world by allowing a good portion of the populace to die along with them.

Tom Cafferty and his team put a stop to Van Hess’ plan and now the self-described “savior” is a wheelchair-bound prisoner in a steel-and-concrete platform in the ocean off the East Coast.

Van Hess isn’t fretting his imprisonment, however, for he’s a man biding his time. He’s certain he’ll soon complete his intended mission and get his revenge against Tom Cafferty.

“It’s been one year. They are coming for me and I will answer the call. I will save humanity and my price hasn’t changed but now there is one more demand. Thomas Cafferty is a dead man.”

In Nevada, Van Hess’ nemesis is preparing for the next assault by the creatures and the captive egomaniac is the last person he’s thinking about.

“Now they knew what they were up against. Cafferty was preparing for a short and intense battle against those gruesome underground creatures.”

He won’t have long to wait.

In San Francisco, the morning calm is broken by an unbelievable sight.

“A manhole cover flipped high into the air. Metal crashed against metal as two cars collided at the intersection. Multiple shots rang out. A creature exploded out of the manhole. Then another. And another. They charged up Lombard Street, cutting down everyone in their path.”

These creatures are more tolerant of light and oxygen than the former ones, and in a short time, the world’s major cities have fallen to their attacks.

Briefly, it seems humanity has met its match. Then Tom Cafferty is contacted by President Amanda Brogan who gives him the astonishing order to see Albert Van Ness.

“He has information on how we can stop this attack but he’ll only talk to you.”

Against his better judgment, Cafferty obeys. Confronting Van Hess is the last thing he want but if the president orders, what else can he do?

After exchanging insults as only two old enemies can, Van Hess agrees to help—with “one simple condition.”

His terms: “‘A gentleman’s agreement between you and me. At the end of this, only one of us will be alive. One must live and one must die. Are you willing to play my final game?’”

Believing he’s signing his death warrant, Cafferty has no choice but to agree, and Van Hess bring out his ultimate weapon—thousands  of supersoldiers, clones of his new second-in-command, Franco Roux, a man whose dedication to the task at hand makes him both an asset and a danger, and perhaps a secret ally in the coming struggle between Van Hess and Cafferty.

The soldiers are programmed to do nothing but kill the creatures, an act they commit with startlingly ease, but Van Hess still has his own private agenda for them, and the world won’t learn of it until too late.

Obliteration is a truly tense and nerve-shaking narration, offering more of the same vivid description and characterization as the two previous novels. In each story, a key character has been lost and a new one gained, and this time is no exception. Cafferty will lose a member of his team while Albert Van Hess will also obtain his grandest desire in the most ironic way possible.

With a rapid-fire description that leaps from victims’ viewpoint to that of their defenders, Obliteration gives a masterly account of the determination of human beings to survive against unbelievable odds.