The Obamians: The Struggle Inside the White House to Redefine American Power 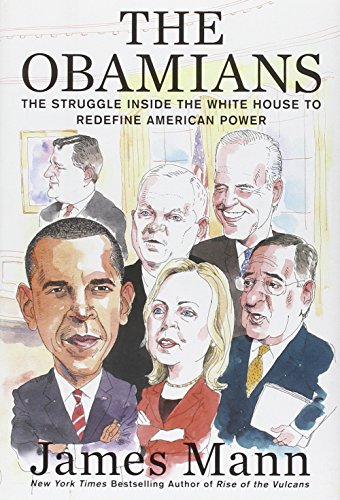 “. . . politics and foreign policy wonks will love this book. They may not learn much about the people in the inner circle, but they will get the scoop on why Obama chose Cairo rather than Jakarta for his first speech to reach out to the world’s Muslims.”

In a way, the cover of The Obamians reveals the weakness inside.

Author James Mann promises to “focus primarily” on a little known “inner circle of aides” to President Barak Obama, mainly at the National Security Council, who “thought of themselves as a new generation in American foreign policy . . . post-baby boomers, born in the 1960s and 1970s,” newcomers not tied to the assumptions of the Bill Clinton White House or the even older Vietnam syndrome.

These advisors, claims James Mann, have been “the ones involved in the real decision making” on international issues in both Obama’s presidential campaign and administration. Indeed, the title of the book is the nickname the author gives them.

Yet the book’s cover displays sketches of exactly the graying Establishment gurus who supposedly lack influence—including Vice President Joe Biden (age 69), Secretary of State Hillary Rodham Clinton (age 64), Defense Secretary Leon Panetta (age 73), former Defense Secretary Robert Gates, (age 68), and what looks like the late and indispensable ambassador-for-everything, Richard Holbrooke (who died in December 2010 at age 69)—all of whom, combined, can count over a century of government experience.

Maybe that’s understandable. As Mr. Mann points out, because the younger crew “had so little experience in governing, they . . . would need the veterans of the Clinton administration, as well as some old hands from government bureaucracies such as the CIA and the Defense Department.”

Indeed, he admits at the end that when it came to the single most important foreign policy action of Obama’s first three years—the killing of Osama bin Laden—“Most of them [the supposed inner circle of youngsters] didn’t know what was under way.” So any book that aims to analyze the Obama Administration’s international decision making must include the graybeards.

But the author should be honest with his readers and not pretend that this will be the hidden story of some little known crew of young insiders.

In truth, the book proffers fascinating tidbits about both the big names and the newbies. And luckily Mr. Mann—thanks to his years as a foreign correspondent, bestselling author, and academic—has the background to provide such anecdotes. He also provides trenchant analyses of the major foreign policy issues of 2009 through 2011, from the surge in Afghanistan, to the “reset” in Russia, to the early confusion and ultimate toughening on Iran and China, to the targeting of bin Laden.

Fulfilling at least part of its promise, The Obamians may well be the only place where readers can learn about people like Ben Rhodes, Denis McDonough, and Mark Lippert—the worker bees on Obama’s Senate staff, the 9/11 Commission report, the 2008 campaign, and other key political steppingstones.

For instance, Mr. Mann describes how Obama kibitzed with the youngsters in writing his Nobel Peace Prize acceptance speech in 2009. Particularly juicy is the anecdote where McDonough dresses down the far more renowned Holbrooke—“pointing his finger for emphasis”—because of a profile in the New Yorker that the Administration felt, was too self-promoting (a common complaint against Holbrooke).

Turning to the older generation, Mann reveals the people Hillary Clinton wanted—and failed—to get named as ambassadors. Fascinating, too, is his description of who can get away with disagreeing with the president and who can’t.

But it takes too long to get to this good stuff. The book spends its first fifth tracing U.S. political history back to Vietnam, before Obama finally gears up his presidential campaign.

Even worse, readers must grope for these nuggets within a rehash of well-trod information, such as the internal Administration debates over putting more troops into Afghanistan and setting up a no-fly zone over Libya. Although the publicity material claims that Mann “conducted hundreds of interviews,” he seems to rely on only a handful—mainly Rhodes. (Or perhaps it only seems that way, because there are so few direct quotes or anecdotes.)

Author Mann is at his best when analyzing the dilemma facing Democrats before and into the Obama years as they juggled opposing George W. Bush’s unpopular Iraq war and waterboarding of prisoners, while also shedding the party’s four-decade-old, post-Vietnam burden of being labeled “soft on defense.”

Similarly, they needed to distinguish the idealism of supporting human rights overseas from Bush’s proclaimed goal of creating democracy in Iraq—and then decide which foreign crises justify military force.

Biden and Clinton, after all, voted to authorize the Iraq war in 2002, when they were in the Senate. By contrast, the younger Obama insiders were happily free of such burdens, yet also strangely less optimistic: “For the Obamians, modern history started with the events of 2001–2002 . . . Those events gave the Obamians a distinctly more modest and downbeat outlook on America’s role in the world.”

The young crew reached the height of their influence at the beginning of Egypt’s Arab Spring. While the Old Guard hesitated about abandoning Egyptian President Hosni Mubarak, the novice “Obamians viewed the events in Tunisia and Egypt as a sign of a new era; the upheavals reflected the beginning of transformational changes in the Middle East, which the United States should not be opposing.” The ultimate Obamian—President Obama—supported this group in Egypt but not later on, when the spirit of “transformational change” shifted to Bahrain and Saudi Arabia.

The book is also rich in hitherto-unreported details about the planning of the bin Laden raid. Secrecy was so strict that Secretary Clinton couldn’t even discuss plans via videoconferencing while she was traveling, for fear that some techie might overhear.

For such insights, politics and foreign policy wonks will love this book. They may not learn much about the people in the inner circle, but they will get the scoop on why Obama chose Cairo rather than Jakarta for his first speech to reach out to the world’s Muslims.