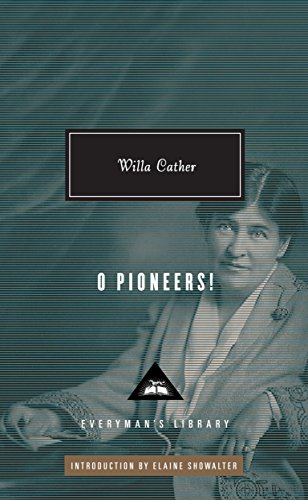 “Whatever Willa Cather was, ‘brilliant writer’ would head the list for most admirers of the literary novel. . . . This handsome edition even comes with bonuses: a very good introduction by Elaine Showalter and a most interesting chronology that reads like a concise history of Willa Cather, America, and America’s literary giants.”

This handsome book, with its ribbon-bound bookmark, resembles a breviary, giving it an almost reverential aura in its tribute to one of America’s best prose writers, but its larger gift remains the story itself, which shows a great artist groping for and finding her own authentic American voice.

O Pioneers! is of course not the novel that author Cather’s My Antonia is. My Antonia is a candidate for The Great American Novel and belongs on the reading list of any reader who has advanced beyond vampires and/or cardboard characters for their reading pleasure. But O Pioneers! (the title is from a poem by Walt Whitman) serves clear notice to the titans of American letters to make room in its ranks for a promising new member. The novel is that good.

In this novel, written when the author was nearing the autumn of her life, Ms. Cather, 40, abandoned her reasonably successful past efforts to imitate the writing of Henry James and found her own voice. It was the voice molded by her youth in Nebraska when Nebraska was part of the American frontier—a youth she had tried to escape by moving east, first to Pittsburgh, and then to New York, and of course in imitating the writing of eastern icons like James.

Published in 1913, O Pioneers! was born almost by accident. Though Ms. Cather had already published poems, short stories, and even a novel, her friend and mentor Sarah Orne Jewett, an accomplished author herself, advised her to seek her own writing voice. Sifting through some stories she had been working on, Ms. Cather saw that they were not so much disparate stories as perhaps pieces of a novel trying to come together. Voila!

The New York Times review called O Pioneers! “American in the best sense of the word” and pronounced it filled with a “deep instinct for the land,” and exhibiting a “vital consciousness for the dignity and value of the life that may be lived upon it.” All of this is reflected in the character of protagonist Alexandra Bergson, who with her two dunderhead brothers inherits a hardscrabble farm on the Nebraska divide in the late 1800s—and then, in spite of the brothers and countless other hardships of rural pioneer life, gradually turns it into the most prosperous spread anywhere around, though perhaps at the sacrifice of her own personal fulfillment.

The word “perhaps” is used advisedly. Though Alexandra marries a longtime friend at the end of the book, the match seems an ambivalent one, and Ms. Cather herself never married, living instead either a homosexual life or an asexual one. She guarded her privacy so fiercely that even her biographers, who do not doubt her sexual orientation, cannot be certain. At the very least, she suffered gender angst, once cropping off her hair, changing her name to William, and dressing and going about for a while as a boy.

Whatever Willa Cather was, “brilliant writer” would head the list for most admirers of the literary novel. O Pioneers! bears the telltale earmarks of an early novel: author intrusion; inclusion of the unessential; wooden dialogue used awkwardly at times as exposition; the occasional eccentric image (here “bubbling eyes” comes to mind). But the appreciative reader excuses all that after being moved again and again by Ms. Cather’s otherwise solid writing, deft sense of story, and luminous prose—and one is not at all surprised to find that only five years later, in My Antonia, Ms. Cather has mastered her craft and delivered a literary masterpiece.

This handsome edition even comes with bonuses: a very good introduction by Elaine Showalter and a most interesting chronology that reads like a concise history of Willa Cather, America, and America’s literary giants.