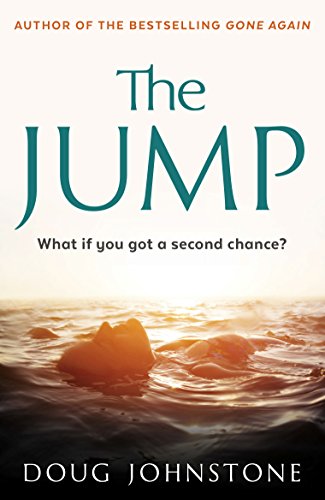 Doug Johnstone’s The Jump begins with two sentences that depict a sadness that’s unthinkable until you’re a mother or father who’s forced to confront it:

“There were widows and orphans, but why wasn’t there a word for a parent who lost a child? Because it was too awful to contemplate, too terrible to give a name.”

That thought is at the front of Ellie Sharp‘s mind as she takes her daily walk across the 45 meter-high bridge that crosses the Firth of Forth, an estuary in Scotland that flows into the North Sea. It’s a suspension bridge, so it sways in the wind and vibrates beneath her handhold as she progresses along the narrow walkway.

As always, Ellie’s walking toward the center of the bridge when she spies a teenage boy just barely balanced on the wrong side of that walkway, “holding onto the railing behind his back, looking down at the water” more than 150 feet below.

Ellie knows what he’s about to do, because her son Logan leapt to his death from the same spot months before. In that moment, standing above those turbulent gray waters and still mystified by what led her son to kill himself, she’ll do whatever is necessary to stop the boy from jumping.

What happens next exemplifies what makes Ellie—a married, middle-class woman whose own life has been suspended by grief—so compelling. With carefully chosen words and soul-baring honesty she essentially relives the seconds before her own son stepped off the bridge and convinces the boy to step back to safety.

There’s enough suspense in this exquisitely rendered opening scene to justify a slowing of the action so Ellie can spend a little time getting to know the boy, whose name is Sam. Yet within a few pages the tension is ratcheted up again as Ellie discovers he’s is connected to a brutal attack on a local policeman (Ellie finds the victim, and isn’t sure, based on the knife protruding from his stomach, if he’s going to live).

Johnstone, who wrote the bestselling Gone Again and several other notable books, is characterized as a thriller writer, so these suspenseful scenes and a spate of violence that occurs later on are well-suited to this story. What sets him apart from many writers in the genre is the sheer realism in his writing. His characters are everyday people who live and breathe on the page and go to stunning but completely believable lengths to survive the horrifying situations they’re thrust into.

That said, The Jump is a stand-out story because Ellie, who in other circumstances would certainly live a law-abiding life, becomes an inimitably appealing vigilante in her effort to protect Sam and his younger sister. Mentally, she’s perfectly suited to do so, as someone who has studied the psychological detours that can steer a teenaged boy toward a suicidal path. Emotionally, she yearns for what she calls “a second chance” to save the life of that troubled boy.

In other words, as someone who’s experienced “a parent’s worst nightmare,” she’s determined to keep it from happening to someone else.

Which leaves her at the very edge of sanity as she swims through the river, fills her mouth with its murky water, and imagines she’s swallowing remnants of her son’s ashes, which were scattered there. Fortified by the experience, she then makes her way into the bedside of a critically injured villain who becomes even more dangerous after she threatens to reveal what he’s done.

By this point you can’t blame her, knowing how well she understands psychotic undertow to everything that has happened to Sam and his sister. You’ll also be cheering her on as a guardian angel who crawls through the muck to reinforce a moral code tarnished but not unbroken by her determination to do what’s right for the children she’s compelled to save.