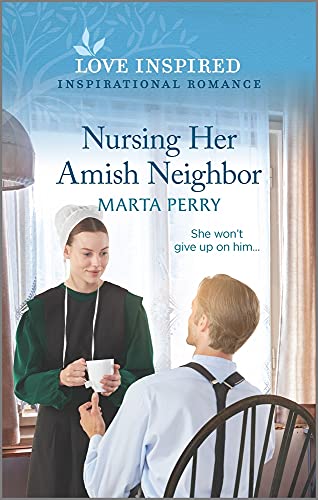 Miriam Stolzfus has just returned from Ohio to Lost Creek after taking care of her aunt who had surgery. Though not a nurse, Miriam is known for her caring skills, and while there, she also cared for a teenaged boy with his recovery. Now she is happy to be back home and with her parents and her boisterous younger brothers.

Now, what is in store for her future? No longer young, she concludes she'll remain single and never have a family of her own. Most women her age are already married and have children, but being back with those she loves is what matters.

Realizing she is destined to be unmarried, Miriam she finds it hard to get back into her life in Lost Creek. The Amish are close-knit and know everything about their neighbors, but she fears tales will abound about her time in Ohio. She has done nothing wrong, and these are her family and friends, yet when she overhears gossip about her, she wonders what others are thinking. With a clear conscience and head held high, she goes on with her life, and the rumors are put to rest, giving her peace of mind.

Matthew King and Miriam grew up together as neighbors, and now Matt needs Miriam's help—though he refuses to accept it. While out in the buggy with his younger brother, David, they were hit by a drunken driver; David was killed instantly and Matthew severely hurt. Now that Matthew is confined to his bed, Matt's father hires Miriam to care for him, aware of her exceptional talent for caring for others as well as her limitless patience.

Though the two have known each other for a long time, Matt does not want anyone's assistance and is belligerent when she arrives. He does not want to perform the exercises his therapist has given him to regain the use of his legs, and he unequivocally shows his feelings. Miriam is concerned by his attitude but resolves she must get him out of his funk and back on his feet.

Meanwhile, she has to contend with Matt's younger sister, Betsy, who wants no part of Miriam's help and thwarts any progress she makes with his healing. After all, she is Matt's sibling, and she believes she can take care of him better than anyone.

The gloom in the King household is palpable, and it saddens Miriam. Matt's dad tries to act stoic and carry on as though nothing has happened. He hires Miriam's brother, Joshua, to take over David's duties on the farm, and Joshua's presence is a constant reminder of their loss. Matt's mom is a shell of who she used to be, unable to contain her grief over losing her youngest son and the agony of seeing her oldest in such pain. On top of this, Betsy is acting out, but Miriam understands she is grieving, too.

Tim, the physical therapist, comes to oversee Matt's progress, and between him and Miriam, they work hard to help Matt adjust and regain his strength. Yet Matt can't get over his guilt, believing the accident was his fault, even though everyone assures him it was not intentional.

As time passes, with Miriam becoming more a part of Matt's family, Matt's mother starts to show signs of the vibrant woman she once was. Betsy accepts Miriam, especially after Miriam includes her with Matt's treatment. However, there is one problem—Miriam is falling in love with Matt, though Matt believes he could never take a wife. With a badly scarred face and injured body, how can he support a family?

Nursing Her Amish Neighbor is book #6 in the Lost Creek Series. It gives a delightful look into the Amish community, depicting that they, too, have worries, fears, and problems like anyone else. This gentle and forgiving group offers a glimpse into their strong faith and love of their people, making this an uplifting read.