Nowhere but Home: A Novel 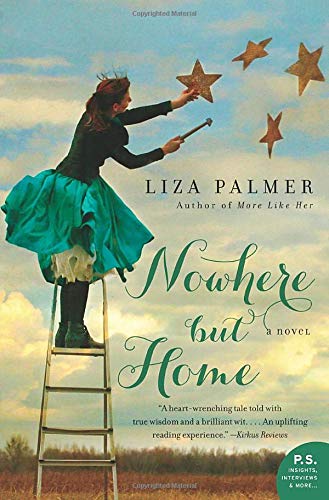 “For the reader not troubled by cliché, Nowhere But Home is a nice, warm snack.”

There is a certain fascination in fiction, particularly women’s fiction, with proving Thomas Wolfe wrong: Apparently you can go home again. Particularly when it’s painful.

Liza Palmer’s Nowhere But Home is this spring’s entry into the nostalgia game as her cantankerous chef, Queen Elizabeth Wake returns to her tiny Texas hometown.

Battered and bruised by life as a chef in New York City, Queenie is nonetheless reluctant to expose herself to further humiliation from people who judged her white trash, teenage life harshly. Back against the wall, she risks embarrassment to move back in with her sister and nephew, hoping for a little peace before plunging back into the real world.

Her detour takes a little longer than she expects. A job as a chef on death row offers Queenie the opportunity to earn a little money while learning life lessons. As an added bonus, she’s given the opportunity to come to terms with her mother’s killer and face the man who broke her heart a decade before.

Reading Ms. Palmer’s latest novel presents somewhat of a mixed bag of delights and clunkers. On the positive side, she has a sharp way with words. Ms. Palmer’s dialogue rings true to the ear; it’s funny a great deal of the time and poignant when it needs to be.

She describes the challenges of small town life well, evoking the near impossibility of creating a new persona—especially when “the folk” have already established their negative opinions—with an acerbic bite that is refreshing. Secrets are impossible with the former homecoming queens turned Queen Bees buzzing around and pollinating already fertile imaginations with their gossip.

Strong, too, is her use of cooking and cooking metaphors to draw the reader to the admittedly nasty protagonist. Queenie can be difficult to like, especially in the opening chapters. Ms. Palmer allows the reader to get inside Queenie’s head, using her love of food and careful craftsmanship as a metaphor for her earnestness and soft center.

Less strong is her depiction of small town Texas. Aside from Queenie, the characters run the gamut of every Southern cliché. We all know Southern women are one big bundle of velvety sweetness, wrapped around claws, right? And that all Southerners are nosy busybodies—but funny! Right?

While there is a kernel of truth in most clichés, Ms. Palmer’s become cloying in their sheer volume. It’s Hollywood’s version of Texas with loudmouths, big hair, and women working womanfully to avoid smearing their mascara after their frequent tears and shouting matches.

Nowhere But Home is a romantic comedy natural, light as a buttermilk biscuits and about as substantial. There are a few laughs, a few tears, lessons learned, and fences mended, not to mention a romance tossed in like a quick smear of honey.

For the reader not troubled by cliché, Nowhere But Home is a nice, warm snack.