The Nowhere Child: A Novel 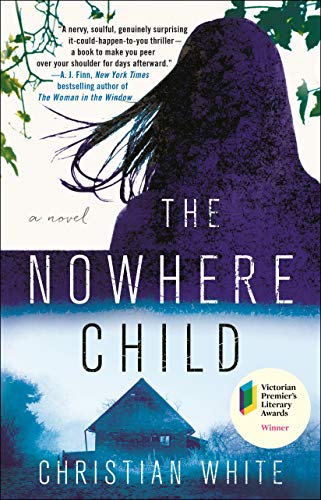 The cosmopolitan neighborhoods of Melbourne, Australia, are a world away from the rustic hamlets and hollers of American’s Southern Appalachian Mountains. And yet Christian White deftly connects the two in his debut novel, The Nowhere Child.

The Australian writer spins a bizarre yarn of a two-year-old girl taken from her home in a small Kentucky town in 1990, spirited away, and raised to young adulthood halfway around the globe. Nowhere Child won the 2017 State of Victoria Premier’s Literary Award, and now crosses the Pacific Ocean to North America.

Like a steep mountain trail, the thriller’s narrative switches back between the kidnapping and the present, between Melbourne and Kentucky. The contemporary sections are voiced by Kim, the shell-shocked Melbourne woman whose life has been upended by the news brought to her by an American stranger who claims to be her brother.

The young woman travels to Connecticut to join her newfound sibling and drive south with him to Kentucky to try to unravel the mystery of her origin. When she arrives, she finds the border state “a strange and seductive new land of endless wilderness, enormous food portions, country music and Christian talkback radio.” It’s not an unusual first impression for an outsider.

Later, she notes the differences in the wilderness of the two countries. “Australia seemed very far away right now,” Kim observes. “There we had the bush, which was as yellow as it was green. It may have been filled with dangerous creatures, but it was familiar. This place wasn’t the bush, it was the forest. Forests were dangerous places from fairytales, where children were abandoned by their parents and captured by witches.”

In the 1990 sections, White is especially good on how small town claustrophobia affects its young teenage girls, and how its repressed sexuality can cripple their parents. About two-thirds of the way through the novel the lengthy, interwoven setup takes hold, and the tension and suspense begin to accelerate. The book’s explosive conclusion is full of surprises.

For Americans, there is some value in seeing ourselves as others see us, yet there are some off-key, undermining notes in the book, one significant, as well as a handful of minor quibbles.

The significant one: Sharon McCrumb, the literary doyenne of the southern mountains, tells young writers that using snake handling as a central literary device is the mark of a rank outsider—often a Yankee caricaturist. By 1990, snake handling was not, in fact, as White suggests in Nowhere Child, practiced by “many” fundamentalist Pentecostals. It was actually quite rare: confined to about a hundred small congregations, in pockets of the East Tennessee mountains and the hills of northern Alabama. And the reptiles were kept in wooden boxes rather than terrariums, and few of their churches would feature Blue Grass bands.

The quibbles: It’s unlikely that many residents of Appalachia would have referred to religious fundamentalists in their midst as “fundies” 30 years ago, as they do in the novel. Nor would they freely toss around the term “pussy” in mixed, adult company. Likewise, an African American would be unlikely to be elected county sheriff in a predominately white, rural and, arguably, racist part of the country.

Inevitably, some American characters lapse into Australian expressions, “selling up” an old house, rather than “selling out”; rural roads described as “unsealed,” rather than “unpaved.” And surveillance cameras in the U.S. aren’t called CCTV, as they are in Australia and England.

But Nowhere Child is not a documentary; it’s a story, and a gripping one that overcomes its shortcomings.