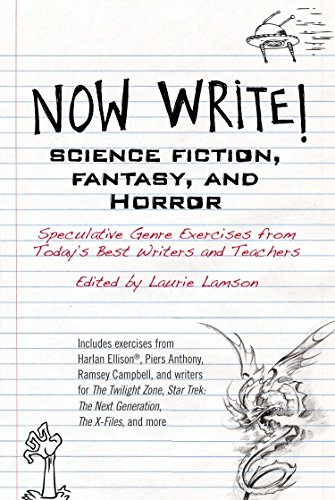 “With more than 80 contributors covering various aspect of speculative fiction, there is bound to be something for everyone.”

The fifth book in the Now Write! series sets its sights on speculative fiction.

Whether you're looking to write the next Hunger Games or conceptualize the next installment of American Horror Story, the newest Now Write! installment will set you on the path to meeting your goal.

The handbook is divided into 10 sections beginning with "Understanding Your Speculative Genre" and taking you through conjuring a concept in "Ideas and Inspirations," "Story Development and Plot," and ends with "Practicing Your Craft." The very talented contributors—both well-known and up-and-coming—of this highly informative manual impart their learned wisdom offering useful advice that include tips, tricks, and tools to get the words flowing.

Since all good writing starts with an idea, Steven Saus' "Where Does He Get Those Wonderful Ideas? Making Speculative Fiction Speculative" shares his secrets for generating original story concepts using single words or random photos that can be found on various websites.

Although speculative fiction is supposed to literally be speculative, Vincent M. Wales warns against going overboard and disregarding all laws of fact in his section of "Credibility." While not everybody was put off by the suspended-disbelief-driven Jurassic Parks' "scientific fact" that a T. rex can't see you if you stand still, Wales does make a good point that if an easily checked statement is made, a writer should do his or her very best to make sure it's accurate.

For those who need a bit of counseling on specific aspects of writing, such as creating characters, Lisa Renee Jones' input on creating a hero is very helpful, as is Raymond Obstfield's very in-depth and detailed process of creating a character arc in dystopian stories, along with Ben Thompson's recipe for cooking up diabolical villains.

Yet after absorbing a multitude of tried and true rules and guidelines for shaping the important pieces to the literary puzzle, Piers Anthony turns the whole thing on its head by declaring his affinity for breaking the rules and pushing the limits, a practice that, for him, results in world renowned writing.

In addition to touching on structure, world building and character creation, the much argued (and very dreaded) topic of writer's block is soundly and creatively addressed by Kealan Patrick Burke whose suggestion to eavesdrop in public and put your own creative spin on a snippet of intriguing dialogue seems like a fairly interesting exercise. While it may not fix the problem facing you on a current project, it will definitely get the creative juices flowing.

One of my favorite entries is Diego Valenzuela's contribution for plotting an entire story using a personal iTunes music library. Simply put the music on shuffle, number a page from 1–30 and hit play. Use the first song title as the title/concept for your first chapter, then hit next, until all 30 spots have been filled. Then write the story for each chapter, keeping only the ones that make sense. The possibilities are endless—especially given that movies and television episode titles can be used in lieu of music.

Although many of the exercises found in this latest collection are quite useful and provide immediate gratification, other tips and tools are more low key, perhaps going for a deeper wax-on, wax-off Zen approach.

With more than 80 contributors covering various aspect of speculative fiction, there is bound to be something for everyone. Now go write!