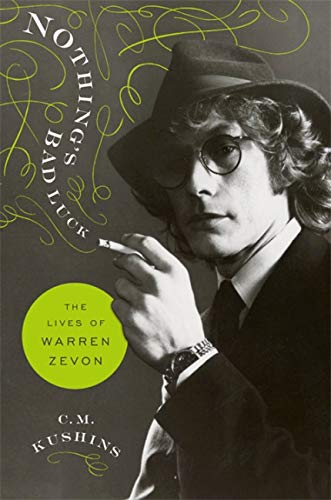 “plunge into Kushins’ uncommonly empathetic biography of the man who wrote ‘Send Lawyers, Guns and Money,’ and much more, and who contributed to the great body of American folklore and legend.”

Nothing’s Bad Luck: The Lives if Warren Zevon is C. M. Kushins first biography, so he might be forgiven for saying in the Coda at the back of the book that it’s an “objective” account.

Kushins ought to know better. After all, he’s been a journalist, and, while journalism can be fair and accurate it’s rarely if ever “objective.” In fact, there’s no such animal. Moreover, if this book were to be “objective” by some kind of miracle it wouldn’t be as much fun to read as it is.

In the chapter titled “Discography, at the tail end of this book, Kushins finally comes out and admits he’s “a huge fan.” Indeed, it shows.

All biographies of rock musicians, singers, and songwriters are the same. They all describe the rise to fame and fortune, the fall into drug abuse and abuse, the marriages, the divorces, the affairs, the concerts, the tours, the studio work, and the war between the creative impulses and the self-destructive drives.

Of course, the biographies are also all different from one another. The names of the people and the places are different, as are the titles of the hit singles and the landmark albums.

Nothing’s Bad Luck follows the format. It does what a biography of a rock star is supposed to do and what readers want.

It’s also unique in part because there was no other singer/song writer/musician like Warren Zevon, who was born in Chicago in 1947 to a Jewish father and a Mormon mother, and who died in Los Angeles of cancer in 2003 at the age of 56.

Moreover, there’s been no biographer like C. M. Kushins, a native New Yorker and a freelance journalist, who pours in this book his heart and soul, as well as his love for Zevon’s lyrics and his music.

Nothing’s Bad Luck will drive Zevon fans back to his albums, such as Excitable Boy, The Envo,y and Sentimental Hygiene.

It will also nudge rock ’n’ rollers who are unaware of Zevon’s triumphs and tragedies, to go online, listen to a track or two, and discover Zevon on their own.

For a time in the late 1970s, and then all through most of the 1980s, Zevon’s sensational single, “Send Lawyers, Guns and Money” was the theme song for every self-respecting American smuggler, drug dealer, arms trafficker, and also for all the armchair outlaws who wished they might have adventures of the kind that are described in the song.

It was hard not to identity with the main character and the narrator who seems a victim of circumstances and also the author of his own fate.

Forty-one years after “Send Lawyers, Guns and Money” was first released, it has lost none of its narrative power, its powerful images, and its exuberant and yet focused energy.

C. M. Kushins shows that Zevon was an original poet with a vivid imagination who drew inspiration from newspaper headlines and from popular myths and legends to write songs like “Werewolves of London” that helped to build a cult following.

The biographer, who doubles as a devoted fan, has done his homework, listened to the music, interviewed the people who were with Zevon as friends, lovers, and fellow artists and musicians.

If individuals are known by the company they keep, that’s especially true of Zevon who rubbed shoulders with the likes of Jackson Browne, Martin Scorsese, Carl Hiassen, and Peter Fonda, and who also appeared frequently on TV with David Letterman.

Zevon had a quick wit and a tongue to go with it.

“I got to be Jim Morrison a lot longer than he did,” Zevon quipped.

With more than a touch of self-deprecating humor he added, “I was a little medicated during the 1980s.”

Kushins gets up close and personal with Zevon so much so that it sometimes hurts.

He includes the facts and the factoids and also pulls back, makes useful comparisons, and provides context as when he writes that while Zevon “long cited Bob Dylan’s John Wesley Harding and Bruce Springsteen’s Nebraska as two albums he found to be true, individual statements, they were both heavily grounded in early American country traditions.”

Nothing’s Bad Luck shows why Zevon was so beloved by fans and by fellow musicians, even though he messed up time and again, squandered his talents, and endangered himself.

Indeed, he was brilliant, vulnerable, and resilient.

“I should make the effort,” he said near the end of his life when he knew he didn’t have much time left. He made the effort to live and to write songs repeatedly and especially when he was down on his luck.

Maybe his bad luck was a kind of muse.

Readers might make the effort to plunge into Kushins’ uncommonly empathetic biography of the man who wrote “Send Lawyers, Guns and Money,” and much more, and who contributed to the great body of American folklore and legend.