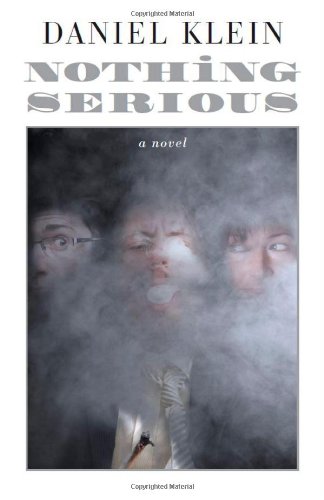 “. . . a rollicking farce . . . a tightly plotted comedic tale with a genuine emotional center and a sharp satirical wit.”

Digby Maxwell is a washed-up magazine writer from New York.

With an astute sense of discovering the next big thing in pop culture, he was the go-to writer at New York magazine for all things hip. Adultery and ego got in the way and he found himself without a job until Felicia Hastings brought him in to helm Cogito, the philosophy magazine of a small liberal arts college in Louden, Vermont.

What follows is a rollicking farce one could describe either as a more accessible version of Alexander Theroux’s Laura Warholic or a highbrow version of PCU (Hart Bochner, 1994).

In a novel with star-crossed lovers, real estate shenanigans, and a hilarious riot scene, Mr. Klein also manages to pack in several instances of educational material on major philosophers. It’s edutainment without dumbing it down that end up degrading both aspects of the buzzword.

Digby’s task is to make Cogito relevant to today’s readers. A vague description he uses as an opportunity to tackle an important concept (heaven), woo some high profile writers, and bring in advertisers.

Suffice to say, this doesn’t sit well with the staff, which includes a humorless feminist and a reclusive, absentminded Russian logician. They think the heaven concept is ludicrous, and the acquisition of sponsors for the magazine threatens Felicia Hastings’ plans. Those plans involve the magazine not succeeding.

While the office politics get things to a simmer, it threatens to boil over when Digby meets a Universalist Unitarian pastor with the cumbersome name of Mary Bonavitacola. Recently widowed, Mary and Digby connect but things remain frustratingly platonic. This is a good thing for Digby, since he was quite the rake in New York City, bedding heiresses and celebutantes with the drop of a quip.

Then Rostislav, the Russian logician, goes missing, and Digby witnesses the dean uttering a homophobic slur. Digby takes it upon himself to notify the media and then watch the ensuing PR debacle from Uncommon Grounds, the local coffeehouse.

In the end, Mr. Klein creates a tightly plotted comedic tale with a genuine emotional center and a sharp satirical wit. He lambastes in equal measure the politically correct pieties of academia and the hyper-trend-conscious attitudes of New York hipsters.

Beneath the scabrous humor there is a genuine love for all humanity. The title is a big clue. In the end, the title says it all. The pursuit of happiness involves to some degree the ability to not take things seriously.

Mr. Klein’s Nothing Serious is a short sweet novel, equal parts intellect and comedy—perfect to read on vacation or as a palate-cleanser for more heavy handed fare.