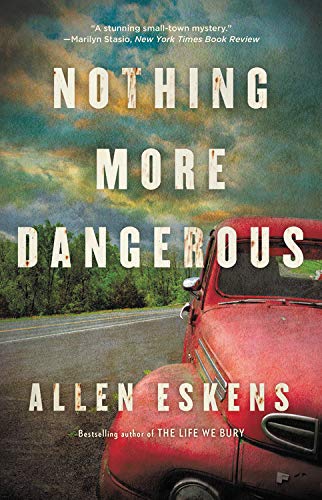 “Nothing More Dangerous is the next best thing to Harper Lee’s To Kill a Mockingbird . . .”

Allen Eskens exposes the ugly face of racial prejudice, the cost of unintended actions, and the price one must pay for redemption in a compelling novel that one cannot put down, no matter how painful the reading is at times.

Fifth-year-old Boady Sanden is determined to escape his hometown of Jessup, Missouri, and St. Ignatius Catholic High School, so much so that he hides away whatever money he can save from his afterschool and summer jobs in a coffee can he buries in the woods.

“What started out as an itch in my chest had festered to the point of near suffocation, and I knew that I had to get out of that town and away from the hell that was St. Ignatius.”

Self-centered as many teenagers are, he justifies running away and leaving his widowed mother alone by thinking that she won’t grieve long, and that Grover, their redbone coonhound would comfort her. After all, she had closed into herself after his dad died when he was five, so she probably won’t even miss him.

“But then again, Judas probably had the same notion as he filled his pockets with those silver pieces.”

Boady knows “deep down” that he will break his mother’s heart by leaving, but tells himself that their neighbor, Hoke Gardner, will comfort her. And there is also Wally Schenicker, who owns the drywall company where both he and his mother work, he after school and in the summer.

Allen Eskens skillfully creates a three-dimensional character in Boady as the young teenager wrestles with his conflicted feelings and counts down the days until he is 16 and cannot so much escape Jessup as flee for his life.

To a degree flee is the correct description, as least as far as St. Ignatius is concerned. Jarvis Halcomb, a senior, and his posse, nicknamed Beef and Bob, are out for revenge because Boady humiliates them when he trips Bob before he can dump chocolate pudding on the school’s only African American student and a girl at that.

“Yet, try as I might, I couldn’t talk myself into minding my own business. I looked at the unfolding situation and could only see one option, and if I’d had more time to think about it, I’m sure that I would have chickened out.”

Boady doesn’t save Diana Jackson because he abhors racial prejudice—he hardly views his action in that light—he does it because he is decent.

Nevertheless, Boady now has a target on his back. Jarvis Halcomb will administer a beating if he catches Boady. The boy hopes he will survive, but knows that is not a sure thing.

To add to Boady’s problems the old Victorian house across the street is refurbished and sold to the Elginses, a black family from Minnesota. Mr. Elgin has been sent to investigate the embezzlement of more than $150,00 from the local plastics plant, Jessup’s largest employer.

Jarvis Halcomb’s father is plant manager and resents Mr. Elgin snooping in the books. The fact that Mr. Elgin is black only makes it worse. Everyone knows that Lida Poe, the African American bookkeeper, took the money, then disappears. No need to look further in Mr. Halcomb’s and the town’s opinion.

Jarvis suddenly decides to forgive Boady for his indiscretion. There is a catch, though. Jarvis wants Boady to write a racial message on the Elginses’ home since he lives across the road from them.

Boady refuses. He has met the Elginses and feels they are decent people. Besides, he is developing a friendship with Thomas Elgin, their 15-year-old son.

It’s hard going because they are very different, although color, while acknowledged, is a minor factor in the relationship, except when Boady uses an occasional expression that is commonplace in Jessup, but carries a racial connotation that offends Thomas.

Boady explains his feelings about race to Hoke, an older man with burn scars on his arms and a past he refuses to discuss.

“I mean it’s wrong to make folks drink out of different fountains just cuz of their skin color. They can’t help bein’ the way they are . . . I think that if a black man sets his mind to it, he can be just as good as a white man.”

Boady’s beliefs mirror the casual prejudice of most of Jessup, the “us” versus “them” of unconscious tribalism, except Boady believes he is being broadminded, because he does not feel malicious toward African Americans. Blacks are just “different.”

Not that different it turns out, as Thomas often makes comments that are thoughtlessly judgmental and cruel. He tells Boady he is stupid for wanting to drop out of school and work as a drywall hanger. Since his dead father was a drywall hanger, Boady is hurt.

Slowly and with effort Thomas and Boady accept their differences and overcome thoughtless judgements to become close friends. That bond becomes deeper when Boady takes Thomas on a camping trip into the woods, and the two boys discover Lida Poe’s body in a shallow grave.

“I’d done all that work, figuring stuff out, finding clues, and he didn’t give a lick about it.”

Lida Poe hadn’t embezzled the money from the plant and run away; somebody murdered her with a bullet between the eyes. The question is: Did she embezzle the money and was killed for it? Or did someone else do it, and Lida found out?

Nothing More Dangerous is the next best thing to Harper Lee’s To Kill a Mockingbird, and Boady is an older, occasionally equally insensitive Scout. Remember when Scout comments about the classmate who pours syrup on her lunch?

Setting, plot, and characterization are masterfully woven together to create a tapestry of a small town as a tinderbox of prejudice, fear, friendship, and dark secrets, needing only a spark to explode into murderous rage. One man seeks redemption for his past, while Boady struggles for understanding.

A magnificent book and an uplifting one, suitable for both adults and YA. Its only blemish, and it is a minor one, is that the Elginses lacked the flaws that would have made them more human.

On a scale of one to ten, Nothing More Dangerous is at least an 11.