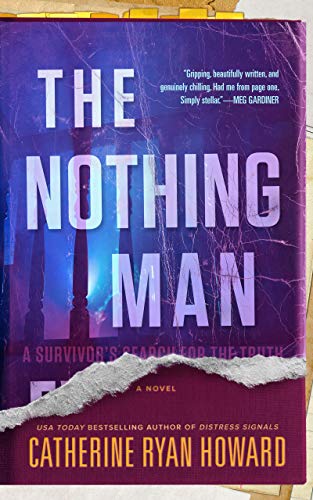 “The story emphasizes the victim’s horror and fear plus the residual guilt of having survived, and the killer’s scorn for his victims as well as his conceit that he’s managed to evade arrest for 20 years.”

In a far corner of a parking garage, Jim Doyle, a security guard at a Cork, Ireland supermarket, sits in his car, reading.

“I was twelve years old when a man broke into our home and murdered my mother, father, and younger sister, Anna, seven years old then and forever.”

It is the true crime story of a serial killer known as The Nothing Man, who committed a series of murders in 2000 in Cork, a story written by the one survivor.

“There are three sides to every story, they say: yours, mine, and the truth. At the time of writing, the Nothing Man has not yet told his. But this is also my story.”

He’d seen the book in the supermarket earlier but went to another part of town to buy his copy. Jim doesn’t want anyone to know he’s interested in Eve Black’s story, but he has to see how much of the truth she tells, for the account she’s written is about him.

He’s the Nothing Man.

“For all they knew about him, he may as well be a ghost. When a junior member of the team said as much, a headline containing the moniker ‘The Nothing Man’ appeared for the first time in the press.”

Jim considers it ironic that, he, a former member of the gardai, the Irish police force, has met Eve several times. He also knows Edward Healy, the officer who assisted her in writing her story.

In her book, Eve says the police are finally about to solve the case and bring the Nothing Man to justice.

“I imagined him feeling safe, maybe even smug, sure that he had avoided detection all these years, no one was ever going to come for him now. But I was coming for him, with Ed by my side. It was only a matter of time.”

Jim doesn’t believe that, but just in case, he decides he’d better finish what he started that long ago night, something he didn’t do then but must do now.

He has to kill Eve Black, not merely because she’s the only survivor, but because of a single statement in her book he has to prove wrong.

“The Nothing Man is an exceptionally apt name for a serial killer. When you find him, you’ll probably be shocked at just how much of a nothing he really is.”

This is definitely an unusual novel—a book within a book, for as Jim reads The Nothing Man, the reader reads along with him the excerpts from the story Eve has written.

Told from two points of view—Jim’s, as he reads the book, and Eve’s in her own words—the story emphasizes the victim’s horror and fear plus the residual guilt of having survived, and the killer’s scorn for his victims as well as his conceit that he’s managed to evade arrest for 20 years.

In her narrative, Eve discusses the Nothing Man’s other victims, and how she picked up his trail, with the assistance of Ed Healy. She writes of things the gardai missed, that in hindsight were obvious clues, and of the witnesses who didn’t know they had seen a murderer.

Author Howard contrasts that with Jim’s memories of the crimes and his scorn for the humdrum life he now lives.

The Nothing Man is a twisty shocker, both from the standpoint of the plot, and the fact that the way it’s presented may make one wonder if perhaps this story is, in fact, a novelization of a true event, that it did happen. The killer’s mundane life is sandwiched between his reading of the story, revealing his thoughts becoming murderously desperate as he goes about his daily duties.

Occasionally, when an author delves deeply into the mind of a killer for characterization, the intention is to make the reader feel some sympathy. In the case of Jim Doyle, author Howard has done the opposite, making it difficult to imagine any sympathy at all—except for the family he leaves behind.

If there’s a complaint at all to this novel, it’s the fact that in Eve’s Postscript, she alleges that she and Ed were on to Doyle all along but proof was circumstantial so they had to let him make the first move. She points out various ambiguously spoken statements that foreshadow this fact. Though this seems a bit of “cheating” for both fictional and actual authors, this will undoubtedly send the reader leafing back through the pages to re-read those specific sections and then wonder how they could’ve missed such blatant disclosures.

In The Nothing Man, award-winning author Catherine Ryan Howard has penned another chiller.