The Ghost Notebooks: A Novel 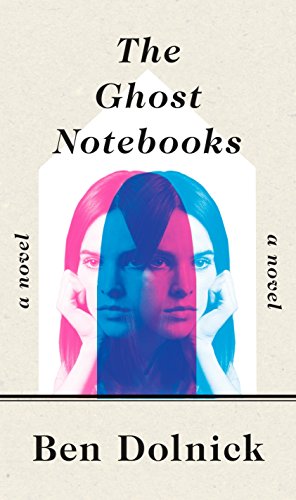 “a haunting story of one man’s determination to assuage his grief by keeping the dead alive and another man’s struggle to give them peace.”

Nick Beron and Hannah Rampe have reached a crossroads in their relationship and their lives. Hannah has recently lost her job and their subsequent argument leaves Nick questioning whether they have a future together. Soon, however, things change as Nick realizes that argument makes him wants Hannah in his life forever. They’ve just announced their engagement when Hannah receives an offer of a job as live-in caretaker to a historic house in upstate New York. The Wright House was the home of Edmund Wright, a 19th century author and philosopher who became interested in spiritualism after the death of his young son.

“I never was one of those people who believed in ghosts.” Nick explains. “I knew people who did and I could never quite hide my bewilderment when I realized they weren’t kidding.”

At first, both are charmed by the quaint 18th century house and the rustic beauty around them. There are few tourists visiting the site but enough to keep them busy with tours and decorating for various local events held there. There are rumors that the former caretaker had problems, that another’s wife disappeared, and she may have been murdered, but that’s all they are . . . rumors.

“We actually liked living in the museum. There was a weird coziness to being there, a playfulness, the way there would be if we’d been camping or living on board a ship.  The former inhabitants were jokes, myths, no more real than pterodactyls.”

Neither Hannah nor Nick believe in ghosts, but as the tourist trade slows and they are alone for days, both feel there is a presence in the house.

Hannah begins to have trouble sleeping; Nick awakens to find her in one of the rooms going through boxes of Wright’s papers. Hannah had once before had sleep as well as nervous problems. She stops her meds, talks to her doctor via phone. He changes her prescription, plans to see her on her next trip to New York City.

Then Nick awakens to find Hannah gone. With the help of the local townsfolk, he finds her body in the river, an apparent suicide. Her parents blame Nick. Her doctor gives a different version of the phone calls she made, declares he wrote no new prescription.

What follows is a nightmare for Nick as he searches for some reason for Hannah’s death.

“There’s a moment after you wake up from a nightmare, when you realize, Wait, I don’t have to worry about that. Those days after Hannah died were the opposite of that, only over and over and over. It’s true. It actually happened. This is now my life.”

Frustrated and grief-stricken, Nick’s actions get him committed to a local mental institution where he meets the former caretaker of Wright House, also a patient. Nick knows he has to escape and return to Wright House, to learn its secrets and how they drove his beloved Hannah to her death. What he discovers, however, is more than a motive, it’s a story of a man driven near-mad with grief and of wandering souls seeking peace.

Told from Nick’s point of view, this story starts out as an idyllic life in a peaceful little town with its one claim to fame being the home of Edmund Wright. The novel is interspersed with quotations from Wright’s writings and journals, as well as odd observations by some unknown person that only become clear at the end of the story.

Nick’s worry that he may not love Hannah enough seems to come merely from their long association. Coupled with the loss of her job and his inability to succeed in the one he’d truly like, it has lead them to a dead end. When they do decide to marry, he sees the offer of the caretaker position as a new beginning for both. As Hannah becomes affected by the house’s spell, the more level-headed Nick becomes a spectator to her deterioration. His initial anguish and helplessness at her death and his frantic struggle to learn why it happened may resonate with some readers who have also suffered such a loss. His discovery that the former caretaker is now a patient in a mental hospital only strengthens his determination to find the entity behind Hannah’s death, and the steps he takes to do so will undoubtedly linger long in the reader’s mind.

The Ghost Notebooks isn’t a particularly frightening story, nor is it filled with “horror” per se. It may wring a shiver or two from the reader; however, they won’t be frissons of fear but more of poignancy. This novel is one that will leave the reader thoughtful and perhaps linger long in the memory. It’s a haunting story of one man’s determination to assuage his grief by keeping the dead alive and another man’s struggle to give them peace.