This Is Not a Photo Opportunity: The Street Art of Banksy 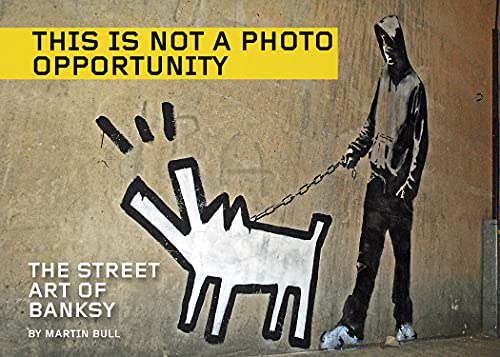 "If you are a Banksy fan or at least interested in seeing a collection of his work. This Is Not a Photo Opportunity: The Street Art of Banksy will be a fun read."

Martin Bull is described as a photographer, author, and street walker who is sharing his graffiti knowledge in a new book named after Banksy’s most infamous soundbite, This Is Not a Photo Opportunity: The Street Art of Banksy. Author Bull describes this work:

“. . . an all you can eat buffet where no one is watching how much you indulge your appetite , and feel free to let out an enormous burp after devouring your way through over 150 color photos, split into ten themed sections.”

For Banksy fans in the know this compact pictorial journey is distinctly delicious, a banquet of roaring images that span the early freehand technique of the 1990s to the more current stencils. These works scream clever, artistic, humorous, ironic, and socially relevant.

Given Banksy’s broad geographic canvas the opportunity to view the spectrum of his work is almost impossible. His works are not only far flung around the world, they also appear in unexpected places. There is no map for finding Banksy’s works. The adoring public can now turn to Martin Bull’s book, which provides an opportunity to view a portfolio of Banksy’s work. Bull’s categories include the following: early freehand, the ubiquitous Rat stencils, slogans revealing Banksy’s innate promotional sensibilities, modern life, play, societal commentary, and what are you looking at?

One wonders whether this attempt to categorize and define flies in the face of the artist’s modus operandi which is free, covert, and unexpected. Could this expanding popular interest in all things Banksy actually diminish the subversivity that has long surrounded his art? Is Banksy’s growing success making it impossible for him to remain rooted in the subculture from which he emerged?

There is no debate about Banksy’s contributions to the aesthetic landscape. He is the Zorro of the art world. Many are obsessed about discovering the artist’s identity. But, even behind the mask, or maybe because of it, Banksy’s approach advocates a direct connection between an artist and his constituency.

Banksy is a media phenomenon. A combination of graffiti artist, painter, acitivist, filmmaker, and provocateur, he was selected in 2010 as one of TIME’s 100 most influential people.

If you are a Banksy fan or at least interested in seeing a collection of his work,This Is Not a Photo Opportunity: The Street Art of Banksy will be a fun read.