Not For Luck (Wheelbarrow Books) 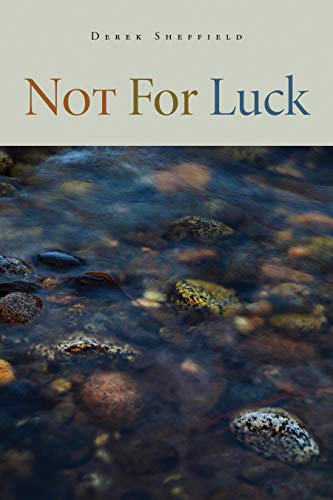 Derek Sheffield, a lifelong resident of the Pacific Northwest, is foremost a writer of compassion. Like the Oregon poet William Stafford, whose spirit informs much of this collection, Sheffield works out his poetics of empathy for all living beings by exploring the terrain of everyday encounters: the telling of stories before bedtime; a day spent fishing for cutthroat on a remote river; listening to a daughter’s sadness at not being picked for a classroom game. In scene after scene, Sheffield teases out both expected and unexpected emotions that swim just beneath the surface of the action, often closing the poem with an associative leap that provides insight and the wisdom of acceptance.

Sheffield possesses the knowledge of a naturalist, intimately and lovingly attentive to the land, to his home ground in the Cascades of Washington state. His voice is conversational, the everyday talk of a friend who’s dropped by to have a beer or take a walk. Yet as each poem in the volume concludes, it feels as if it could not have been said any other way, intentionally using the verb “said.” These are poems to be read aloud, to be spoken, Sheffield’s voice in our ear, his deep tenderness offering one possible path toward a way of being present to the world, to caring for it and each other.

In “A True Account of Wood-Getting from up the Chumstick,” Sheffield recounts how he and his friend Heckman go to a second-growth forest to work up some firewood. Before they split one stick, however, a snag gives way, gashing Heckman’s forehead and requiring a trip to town for stitches. As the doctor sews the skin back together, he suggests that “you’re better off buying your wood.” But Heckman will have none of it, replying without “a prick of irony” that to pay someone else to do the work would be dumb because “you’d lose all the fun.” Later the same day, “the bandage stuck through heave and sweat,” Sheffield supplies muscular language to depict the honest industry of the body:

and grapple and heap, moving our bodies

as well as we could through all we hauled

out of those woods, and getting the work done

as the land split the light of a beautiful wound.

Notice how the poet recreates, through assonance, the deep and resonate thud of logs falling to forest floor, the internal rhyme that suggests the echo of these bodies working in concert with each other, and, finally, the metaphoric jump as Heckman’s gashed forehead is mirrored by the land itself, the scar left by the taking down of trees, hauling them away to burn.

William Stafford in his poem “Assurance” suggests that we “will never be alone,” that the “whole wide world pours down” upon us. Sheffield takes solace in such knowledge. Like Stafford, he marries the domestic world of humans with the natural world outside his window, insisting that all poetry is domestic.

After all, the poet advises, the world is our home. Our work, or, better put, our vocation, must be to serve as stewards of the world, stewards of the only home we’ll ever have. And so it’s fitting that the primary speaker throughout the collection—a version of Sheffield’s biographical self—dramatizes the principle at the heart of John Muir’s oft-quoted line: “When we try to pick out anything by itself, we find it hitched to everything else in the Universe.”

In “hitch,” Sheffield’s gaze notes and celebrates the complexity of life, the manner in which it is connected to all things, strand upon strand, dependent upon the seen and unseen, and while there are many poets who meditate upon encounters with nature—especially the spectacle that might unfold in interactions with larger mammals like deer or bear—Sheffield performs a more subtle drama, one that for most would be ignored or simply go unnoticed. The speaker in “hitch” addresses an unnamed “you” who spies a day moth struggling to survive as it floats downstream, “stuck up- / side down, wings full spread / and legs like sutures.” The speaker differentiates their own past and present from that of the “you,” claiming that

the you who has killed

and eaten and licked

his greasy fingers the you

who has hurt others

and the you who will again

is different from the you who walks upstream carrying the moth to place it in a pine tree, safe for a moment, living on for a time in the grace of these selfless actions.

Unlike many poets whose focus might remain on what the speaker might have learned from such an encounter, Sheffield’s imagination follows the moth’s journey away from the hands that have released the insect into

the bark where it crawls

of the many furrows

puzzling its way up

past how many flakes

how many rays of light

and how many needles

flaring all the way up

to where a wisp of cloud

in the whole blue sky

This is the lineage of a place, of a moment. The person who relates to the moth by noticing it and saving it from the river’s currents, and the moth who is joined with the pine tree where it is placed, and the pine tree that the moth crawls up, entering its furrows, “puzzling its way up,” those “many rays of light” that are broken by the branches’ presence, and all of this united with the sky which floats over us, that world, as Stafford wrote, that pours down upon us.

Sheffield recognizes and writes in the shadow of the present sixth great wave of extinction and the tragedies of climate change. But given these circumstances—and perhaps because of his role as a father to two young girls who appear throughout the poems—he still chooses hope. His is an invitation to an open and expansive world, a place where “early sun and birdsong” might find us, where, as he writes in “What Will Keep Us,” a poem he dedicates “for Katie and Kelsea on the Save Our Coast Hike, “we hike, for our own / place among the eaters and the eaten. . . . We hike for what will keep us / if we keep it.”