This Is Not a Love Letter 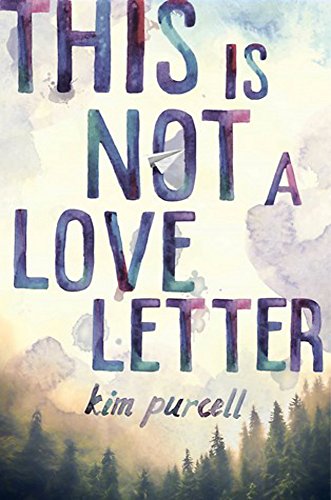 “It is a love letter to good writing, interesting plotting, and strong characterization.”

“Does love have to end in heartbreak?”

This is the crucial question in Kim Purcell’s sophomore novel, This is Not a Love Letter. High school senior Jessie is shocked when her boyfriend disappears a few days after she tells him she needs a week’s break from their relationship. Adults in their small, northwestern town are convinced that Chris has run away, despite his good grades, sports obligations, and the college scholarship he’s already won, but Jessie isn’t so sure. Just weeks earlier, Chris, an African-American, was jumped by a group of rival, Caucasian students, who used racial epithets during the attack. She is determined to force the powers that be to take his disappearance seriously.

Her search and the background stories of the story’s characters are detailed in her non love letter to Chris, echoing the weekly love letters she received from him during their almost year long relationship. She advises Chris in her “account,” “If you want a sexy love letter, you’re going to have to come home to get it.” Though the situation seems cut and dried through Jessie’s thoughts, revelations throughout the book slowly start to throw her certainty into question, and therein lies the special charm of This is Not a Love Letter.

Purcell has crafted a layered look at the complex lives of contemporary teens in this novel. Her characters are dealing with school, their futures, sexual relationships, family chaos as well as family unity, and mental stresses far beyond what most adults are willing to acknowledge. Their drug use is casual, as is their use of profanity (again, probably beyond what many adults are willing to acknowledge). They are tribal and tied to one another at one moment, and willing to cut a member of the tribe out entirely the next moment. Sexual laxity is expected, but not generally rewarded, and lord help them if they are from the wrong side of the tracks or sexually fluid.

Jesse is a child of her environment, full of bravado in the face of more well-off kids but with a child’s determination to find favorable portents even when they are unlikely: “I’m challenging the gods. If he’s more messed up than me and he jumped in the river, cut off my hand!! It’s still there. Fingers are wiggling. I’m all good. Told you.” She has an adult’s social awareness, yet is still oblivious to the overriding pain felt by Chris’ family.

Purcell does a wonderful job of creating a young woman who is scared of everything, though no one around her knows it. With her plethora of issues, such as being poor, having a hoarder, extremely corpulent mother, an absent father, and a boyfriend that stands out in her largely white, middle class town, Jesse’s control is strained and her faith brittle. She clings to the idea of Chris as her rock, even when it becomes increasingly evident that he is barely holding on himself. Purcell has a strong grasp of current youth culture and verbiage, making all of her characters believable.

It’s a great thing, then, that she sets them in this absorbing, twisty tale. This is Not a Love Letter starts out as one thing, presents itself as a certain type of social horror story. What is wonderful is the deft way Purcell gradually turns her story into something with an entirely different kind of poignancy. Inevitably this novel will be compared Gone Girl, The Girl on the Train, or whatever “twist at the end” story is the flavor of the month. It would be a mistake to do so. Purcell’s tale is absolutely believable, her work of turning the tale flawless in its execution—no “gotcha” ending, just a beautifully executed, gentle arc. Her authentic character voices are more reminiscent of a writer like Junot Diaz than Gillian Flynn.

Purcell’s picture of a town far more racist underneath than any adult is willing to admit (though the teens acknowledge such racism as a matter of course) is ugly, but enlightening. The single place where the story falters is in the load of life issues Jesse faces: poverty, near abandonment by her father, hoarder mother, her mother’s size, her own body proportions (does anyone really think about the size of their own breasts that much?), the certainty of her peers that Jesse sleeps around, and having a boyfriend with a raft of his own problems. Though these problems might certainly exist in conjunction in real life, in a novel they threaten to turn to melodrama. It’s a narrow ledge Purcell walks, and some might find it all too much in one novel. Then again, they might not, because Purcell is deft in the way she handles all of the chaos.

This is Not a Love Letter really is not a love letter from girl to boy. It is a love letter to good writing, interesting plotting, and strong characterization. Kim Purcell can be proud of this novel.