Not Even Past: The Stories We Keep Telling about the Civil War 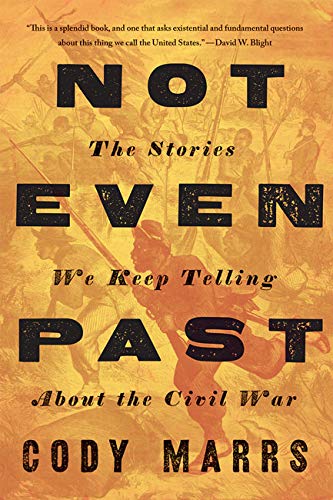 “Not Even Past is a trenchant, wide-ranging survey of the history that binds us a nation while, at the same time, drives us apart. Because it still needs proving now and again, Marrs’ book proves that the American Civil War is with us today as much as it was . . .”

On May 10, 1865, President Andrew Johnson officially declared the late rebellion over and the American Civil War ended. Then, on May 23rd—as beautiful a Tuesday as had been seen in that city for a long while—the three principal Union armies gathered for a last parade through Washington, D.C., that was meant to be as much a celebration as a symbol of unification after five hard Aprils of war. As Stuart McConnell writes in Glorious Contentment, “The Grand Review was the visual embodiment of a reunified nation.”

Except that, as we know, and as Cody Marrs convincingly argues in his new book, Not Even Past: The Stories We Keep Telling About the Civil War, though the days of pitched battle and parades may be behind us, the American Civil War has yet to reach anything like an endpoint, and the myth of a reunified nation has become increasingly remote.

As Marrs makes clear throughout the book, as a society Americans cannot decide how to remember our Civil War. Indeed, we can’t even pin down what to call it. While some might refer to the war as a genteel “Family Squabble,” others might choose to remember the implied heroics of the “Dark and Cruel War.” And while some cut directly to the chase by naming it the “Abolition War,” still others might yearn after the shibboleth of the “Lost Cause.” In Not Even Past, Marrs navigates these shoals with aplomb, looking critically at all facets of the war’s remembrance while never losing sight of the bedrock fact that it was fought over slavery and nothing more.

Throughout this thoughtful and captivating book, Marrs limns how the stories American society tells about the Civil War have evolved down the years. With wonderfully broad overviews of the works of everyone from Walt Whitman to Quentin Tarantino, Marrs discusses touchstones of literature, poetry, art, and film, examining how the Civil War’s portrayal is as malleable as the times require. Again and again, Marrs proves the dictum of his apt title’s quote from William Faulkner’s Requiem for a Nun: “The past is never dead. It’s not even past.”

It is to Marrs’ great credit that Not Even Past doesn’t just settle on examinations of the expected works.  Though Faulkner, Whitman, Shaara, and Foote are given their due, their contributions to the national mythology do not overwhelm the narrative but, rather, stand side by side along with “less well-known” artists like writers F. E. W. Harper and MacKinlay Kantor, sculptors Edmonia Lewis and Meta Vaux Warrick, and poets Lucille Clifton and Natasha Trethewey. Even the films Django Unchained and Abraham Lincoln: Vampire Hunter become arrows in Marrs’ quiver, targeting the ways in which our cultural view of the Great Emancipation have changed from the fiery, hyper-intelligent writings of past activists like W. E. B. Du Bois and Martin Luther King, Jr.

Not Even Past is a trenchant, wide-ranging survey of the history that binds us a nation while, at the same time, drives us apart. Because it still needs proving now and again, Marrs’ book proves that the American Civil War is with us today as much as it was when it began a century and a half ago. The events of Charlottesville, 2017, Dylan Roof’s Charleston church rampage, and the ongoing national discussions over the impropriety of Confederate monuments in public spaces—all of which Marrs spotlights deftly—are proof that, though the Grand Review has passed into the dust, those soldiers only started the great work that is left to us to finish.

Lance Weller is a staff reviewer at New York Journal of Books.