This Is Not America 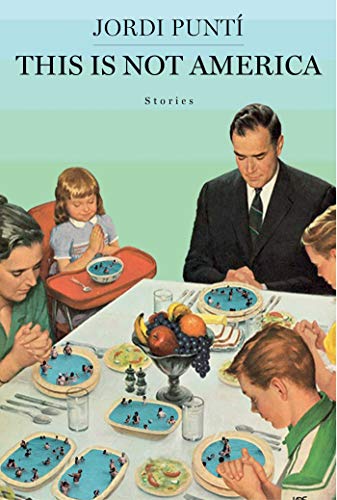 The reader may, at first, be puzzled by the title as it links so firmly to the David Bowie song of the same name. Frankly, the book can be interpreted in the same musical vein and, of course (because Puntí is that brilliant), without. There is no doubt that seen from an ex-America perspective, there is deep humor here; humor that may slip by a more jaundiced American reader.

Indeed, there were times when the stories, for example Kidney, seemed firmly placed in the realm of sarcasm or depression. There, a brother’s lost love, or lack of deep affection, is weighed against his brother’s need, urgency as time fast approaches, for the swap of a kidney. Against this backdrop, Puntí explores memory (true and false in youth), affection, old cudgels, and in the end, the vicious pleasure the protagonist has in settling scores.

As is often the case with translations, the cadence can get destroyed. Seeing Puntí’s reputation for cadence (tested by public readings for which his work is known to play well), this translation was likely to fall short. It does not. The cadence is fluid, intelligent, words carefully placed, and a joy to read aloud. Cadence here is critical for the flow of the words and impact on the psyche of the reader—absorbing the deeper message meant to be simple but impactful.

The final “Kidney” passage of the protagonist’s niece, come to call, carries impact on many levels, reigniting the themes in the previous pages, setting up a crescendo conclusion: “She believed she was the only family tie between the two of them and, feeling this strongly, thought she had to try. Her father’s conditions was worsening. It was no joke. He really needed a kidney, so please forget about his arrogance. . . . When the girl went quiet, he finally gave her the answer he’d been savoring all along.” Read aloud it works in a different way than when read silently. Good literature plays significantly better when read aloud.

Here then is a work on the human condition, the falsehoods we tell ourselves, the self-justifications played out at others’ or our own expense. In the end none of the reasons matter as to why, rather Puntí revels in the aftermath, the cause less important than the effect. In this he strives into Camus’ arena, mirror images of The Stranger come to the reader’s mind. Who is to blame, and does it really matter why if the effect takes over from the cause?

Many of the stories seem to be wandering away from a course the reader is desperate to follow. Emotional attachments get waylaid, or seem to, and need to be brought back on target. Puntí does this with a swift brush stroke much like a frantic painter, exhibiting a remorseless whip into position of the reader’s focus.

Or perhaps it is his fascination with all things musical that allows a conductor’s stringent control to the enjoyment of his tales. In “Seven Days on the Love Boat,” a life is reduced to a momentary assessment, “Here,’ he said. ‘I live here. On the ship.’” This sets the scene for all that follows as the protagonist yearns for that which is fleeting, never possibly permanent. Written in the first person, this story has the hallmark of autobiography without ever being dishonest—it was too sad and revelatory for that.

The last story, “Patience,” seeks to expose interplay between many players, especially the author (in name and person) but in the end reduces itself to human narrowness of purpose. Using the metaphor of hypnotism (and practice) to unlock real secrets, the players finds themselves devoid of the necessary release of protectionist layers to probe deeper into who, what, they are.

Motives come into play here too as Felipe clearly wants to discover something inside that could be useful outside. Puntí steps into the breech, against the desires of Felipe’s ego-driven motives, and delivers the book’s final line, reflecting on time as a construct for the very book (a compilation of years of previously published works), “When he got to the bottom, he didn’t know whether three minutes, three days, or three years had gone by.” Espousing the life, practice, and experience of every author.