North Of Forsaken (A Roamer Western) 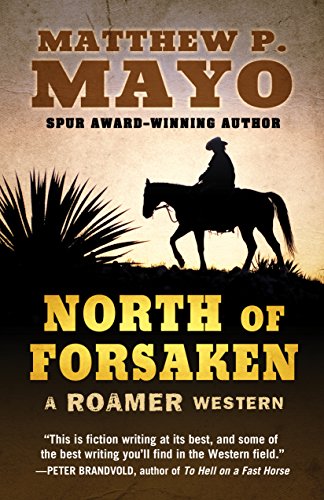 “filled with the excitement of a Saturday morning matinee . . .”

The early life of the man calling himself Roamer was a Cinderella story.

His father was an Italian noble, one degree above being a conman, his mother a spoiled Southern belle. Because his well-to-do parents thought him too ugly a child to be part of their family, he became a servant in his own home. They named him Scarfano, meaning “ugly one.”

“They allowed me to be raised as an orphaned servant boy in my own ancestral home. I suppose I should’ve been grateful they had not had me killed at birth.”

On his 13th birthday, the boy learns his real identity. The next day, he runs away.

Scarfano doesn’t meet a beautiful princess and live happily ever after. He goes out West, acquires a new name—Roamer—and meets an old timer named Maple Jack who becomes his friend. He’s happy in his new life, isolated and difficult as it sometimes is.  Then one day, in a town called Forsaken, he comes face-to-face with his younger brother whom he hasn’t seen in 14 years.

“I closed my eyes and stopped, knowing I would come to regret this decision for a long time.
“He smiled, and I saw the same brown-headed boy I had played with so long ago, in a different life and in a different town . . . I should have run.”

Roamer learns their parents are dead and Thomas has come to Forsaken to take possession of a ranch he’s inherited. Though Roamer is the actual heir to the property, he silently relinquishes any claims to the youngster who wants him to guide him there. Oddly, the deed and maps he has, and Thomas himself, are noticeably vague about its location and anything else about the ranch itself. To complicate matters, there’s a young woman Thomas has invited to go with them. She’s traveling to her father’s ranch, which is somewhere north of Forsaken and whose directions are equally sketchy.

It isn’t long before there are ambushes aplenty, bullets are flying, bodies are dangling from ropes, and a cold Wyoming winter is setting in. With a hard-bitten rancher whose word is law and who wields a rope to prove it, and a deadly husband-and-wife team more than willing to kill everyone in sight to get the deed to the ranch, Roamer is hard put to keep his little brother out of harm’s way, especially since Thomas, in his ignorance of their relationship, seems determined to place himself directly in death’s path.

Maple Jack sums up his attitude toward Thomas in a nutshell:

“‘Brother or no, it ain’t like you owe him. Why, from what you told me, the whole clan has done little more than scrub the bottoms of their boots on you.’
“I fidgeted, hemmed, and hawed, and couldn’t think of a reason to disagree.
“‘Even with all that, you’ve a soft spot for him, eh?’
“‘I guess I do.’ My tone was one of defeat.”

That’s Roamer, summed up fairly well. When all else fails and a six-gun is the only way to reply, Roamer is still a man who’s fair and honest to a fault.  He moans the loss of people he barely knows, those who are in the wrong place at the wrong time. He has a soft spot in his heart for Thomas, though he knows he shouldn’t bother, considering the contrast in their lives and the way he’s been treated. He can’t help himself. When all’s said and done, he’s a good man, untempted by greed and the lure of money.

“The less I have, the more I am,” is Roamer’s motto and it serves him well.

Anyone who enjoys a good, old-fashioned Western will like this series, of which North of Forsaken is the second entry. Though in places stark and brutal, it’s nevertheless filled with the excitement of a Saturday morning matinée. Told from Roamer’s point of view, the story is filled with colorful phrases, terse descriptions, and one man’s philosophical view of life in general and family and younger brothers in particular.

After finishing North of Forsaken, the reader will undoubtedly have the urge to discover the first Roamer novel and any others that follow. Author Mayo’s series is an engaging and satisfying frontier delight.