Norman Mailer: The Sixties: An American Dream / Why Are We In Vietnam? / The Armies of the Night / Miami and the Siege of Chicago / Collected Essays (Library of America) 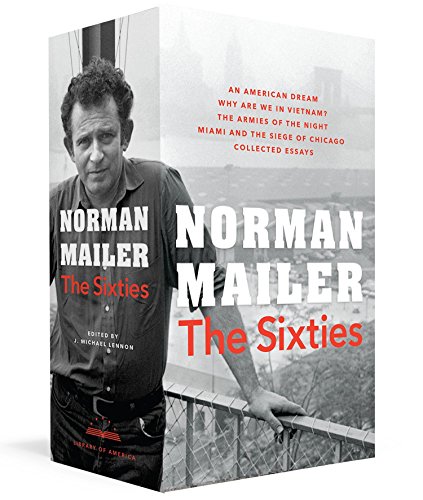 “It is surprising what Mailer can accomplish when he stops posing and simply writes.”

Collected Essays of the 1960s provides more than 30 essays by Mailer, which were previously published in magazines, or as forewords and prefaces to books. All are solidly grounded in the cultural milieu of the 60s. The topics of these essays include politics, culture, architecture, and books.

Mailer’s overriding concern that echoes across many of these topics is the emotional deadening caused by modernity. Most of the essays will be more of interest to cultural critics, historians, and biographers than to the general reader; however, some do have timeless qualities, providing examples of Mailer’s finesse and disgust in his political reporting, and the warmth and beauty in his personal sketches.

Many of the essays lend themselves to comparisons of “America then” versus “America now.” For example, the myth of American exceptionalism. Mailer writes, “Simply, America was the land where people believed in heroes.” For Mailer, the myth died with Joe McCarthy, Sputnik, and the Beatniks. The 1960s also introduced the era of the corporate man. Mailer writes, “the incredible dullness wreaked upon the American landscape in Eisenhower’s eight years has been the triumph of the corporation.”

Of greatest consequence to 1960s politics and culture was John Kennedy, who was a senator before he was president. John Kennedy and his wife Jackie are the subject of many of Mailer’s essays, but as Mailer never had direct access to either, the essays tell the reader more about Mailer’s opinions about their image than about the real, living and breathing Kennedys.

Mailer calls Senator John Kennedy, “The hipster as presidential candidate,” and then points out senator Kennedy’s flaws: his seeming detachment, his behaving like an actor but not having the ability of a “natural” speaker, his movie star looks and his beautiful wife. In the run up to the Democratic Convention of 1960, Mailer preferred Adlai Stevenson and considered Adlai the more likely candidate, though Mailer also had his reservations, “one had the impression of a tired man who (for a politician) was sickened unduly by compromise.”

in an essay written after Kennedy became president, Mailer writes that he believes his (negative) reporting helped Kennedy get elected. The essay continues as an open letter to the president on the subject of Fidel Castro. Mailer criticizes the president for the attack on the Bay of Pigs, and follows in this open letter with the description of an open letter to Castro that he did not send.

In that unsent missive Mailer admits that he intended to write to ask Castro to invite Hemingway back to Cuba, but because of the Bay of Pigs he realizes it would be better to drop that idea, stating he, Mailer, believed the people of Cuba were going to overthrow Castro and soon. Mailer then acknowledges that this belief came from lies from the U.S. press and begins again. “With the best intention in the world, our reporters and secret agents cannot tell the truth any longer, their habits for lying have grown so profound the lie shines with the clarity of truth.” Continuing, Mailer asks Kennedy to apologize to Castro (for the Bay of Pigs) but also realizes the likelihood of an apology is low, “In a pig’s eye he will.”

Mailer follows up one Kennedy essay with another. He writes that he heard Kennedy had read his open letters and was not pleased. JFK was probably also not pleased that Mailer kept up his criticism. In a review of a book that was critical of the president, despite Mailer not liking the book, he felt the need to add, “The President is not a great man, and it may be that he will prove ultimately not to be a good man.”

In a later, and quite bleak essay, Mailer’s “A Happy Solution to Vietnam” contains blistering criticism on how America waged the Vietnam War. “The 10-year-old children who witnessed their village being burned by the U.S. Marines are the ones who at 15 will take up rifles for the Vietcong and fight to the death.” And further in, “Oh Christ, what assholes be Americans.”

Note that both ends of the political spectrum take Mailer’s heat.

In an essay on cultural criticism, Mailer reflects on the difficulty in explaining America to Americans. “[A] peculiarly American phenomenon—a tendency of American society to alter more rapidly than the ability of artists to record that change.”

Mailer also criticizes medical science in his essay, “Our Argument at Last Presented.” His attack however shows Mailer’s lack of understanding of the rationale for the scientific method, that is, how science must be done in order for science results to be recognized as science-worthy and not pseudoscience.

The reader can contrast the poorly conceived “Our Argument at Last Presented” with the well thought-out, “The Playwright as Critic.” Here Mailer writes reflectively on art criticism after staging his own play, “The Deer Park.” “The Playwright as Critic” is a complex, nuanced argument of the relationship between art and money on one side of the curtain, and the theater-goer and critic on the other.

Though Mailer believes art criticism is an essential part of the process of making art he also recognizes the downside: the playwrights gearing their art to gain the approval of the critic. He opines, “Theatre can get away with anything when it makes a rainbow.” Though the “simple” play is something that the critic will easily understand, life is not simple; the simple play “alienates theatre from life.” For Mailer, a play written for the lowest common denominator is not worth writing. For Mailer, whether writing a book, or writing a play, art that is “good enough” is not good enough for him, and should not be good enough for the rest of us.

In his book reviews, Mailer gets to the heart of the matter fairly quickly, though Mailer will often put himself into the review to the point where the reader will often learn more about Mailer than about the authors he reviews.

Mailer notes that he prefers writing novels over short stories. He admits he doesn’t care for the short story form; he is not that kind of writer. He compares short story form to making experiments (this reviewer from reviewing Norman Mailer: Four Books of the 1960s, believes that Mailer preferred his experiments to be novel-sized in length).

Mailer lets the reader in on his personal method of choosing which novel to read. “. . . it is easier and much more logical to ignore what is said about a book when it first appears. There is too much direct and personal interest in the initial approval, and much too much logrolling.” He then explains to the reader his standards for dividing good books from great books. For Mailer, good is never good enough. “But then, good writing is not an act to excite tolerance because it is good, but to anguish because it is not better.”

Mailer also states that while short story writers and poets have a muse, novelists have a “Bitch.” In describing how novelists read other novelists, Mailer writes, “they read to “find the flaw, find where the other guy cheated.” He calls any effort to write the “Great American Novel” to be self-destructive to the author, identifying two writers who attempted and failed: Ross Lockridge (suicide) and Thomas Haggen (drug overdose).

In an essay that lists authors who Mailer considers his peers, there are short reviews on works by John Updike, Joseph Heller, Philip Roth, William Styron, and James Jones, and others. Mailer likes Saul Bellow and has plenty to say about both him and Henderson the Rain King. Mailer also likes William Burroughs though not for his writing; instead Mailer likes Burroughs for his imagination.

Mailer doesn’t like is J. D. Salinger, who he calls a “gifted minor writer” promoted to a major one by the “literary mafia.” Another author called out is William Styron. Mailer calls Set This House on Fire was “A bad maggoty novel.” Mailer then details his feud with Styron.

And there are writers where Mailer has mixed feelings. Of Joseph Heller’s Catch-22 Mailer writes, “Heller is carrying his reader on a more consistent voyage through Hell than any American writer before him . . . ,” but Mailer dislikes Catch-22 for continually beating the reader over the head with that vision of hell. Given Mailer’s complaint on beating the reader over the head, he claims he doesn’t like Mary McCarthy’s The Group, but considers it worthy enough to provide many, many pages of criticism of it.

There are a few (though only a few) hidden gems in this collection of essays. The first is a brilliant and insightful report on boxing and boxers, “Ten Thousand Words a Minute.” The premier boxer of the early 1960s was Sonny Liston (in 1964, Cassius Clay beat Sonny Liston and renamed himself Muhammed Ali).

Mailer writes of Liston, “I declare that [Sonny] Liston made me think not so much of a great fighter as of a great actor who was playing for the role of the greatest living heavyweight fighter in the world.” In this essay Mailer witnesses and describes a welterweight fighter get beaten into a coma— there is no way to describe this except to say you have to read it for yourself.

In another wonderful essay, one that foreshadows the political writing that later won Mailer awards, Mailer reports on the 1964 Republican Party presidential convention in San Francisco. This essay has held up not only as political reporting but also as analysis on politics, and deserves rereading in the age of Trump. At this convention Mailer felt he was looking on the face of fascism in the Republican party.

The competition for the Republican party nomination for president in 1964 was between Barry Goldwater, the senator from Arizona, and William Scranton, the governor of Pennsylvania. Goldwater was ahead in votes. Mailer considered Goldwater’s supporters to be not bright, and his staff professional, handsome, dull, and “full of moral indignation and moral vacuity.” Of Goldwater himself, Mailer writes, “Goldwater was a demagogue.”

A staffer in Scranton’s campaign committee put out a public letter stating, “Goldwaterism has come to stand for a whole crazy-quilt collection of absurd and dangerous positions.” Backlash ensued. Mailer described Scranton’s campaign transitioning from falling behind to failing. “Flooding at one end of the shaft, it was now burning at the other.” Scranton repudiated the letter but his campaign collapsed.

The last Republican President, Eisenhower, who was present at the convention was In Mailer’s eyes, aged and failing. Eisenhower wanted to back anyone but Goldwater but also didn’t want to be seen backing a loser, and withheld his blessing to either candidate.

Mailer’s view of America is pretty bleak, and in commenting on Goldwater’s nomination acceptance speech, Mailer wrote that a part of Mailer wanted Goldwater to win because “the country was in disease,” and his win would place America closer to the apocalypse. One sees in his reporting the precursor to his books, The Armies of the Night, and Miami and the Siege of Chicago.

One last essay that holds up well over time is, “Homage to El Loco.” Presumably written on the topic of bullfighting, really is a character sketch. It is surprising what Mailer can accomplish when he stops posing and simply writes.

Norman Mailer: Collected Essays of the 1960s provides end notes and an appendix.