Normal Sucks: How to Live, Learn, and Thrive Outside the Lines 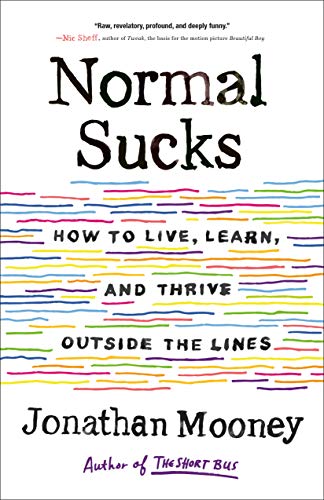 “Written with humor and compassion, laughter and tears, Normal Sucks will inspire all of us to embrace and celebrate our differences.”

The author, who was diagnosed with dyslexia and ADHD, writes this book as a letter to his three sons who had asked him when they were young: "What is normal?" He had trouble answering. Mooney couldn't read until he was 12 years old. He wants his sons to thrive in a world that will tell them that they are not normal because of the way they look, think and learn. "When normal comes for you, I want you to be able to say what I couldn't when it came for me. Normal sucks."

Considering how much Jonathan Mooney suffered as a child, he writes about his experiences and his diagnosis with candid humor. "When the educational psychologist broke the news to my mom and me, it was as if someone had died. Tissues on the table. Hushed tones. Mirrors covered. We sat shivah for the death of my normality." In school he was treated as if he were stupid. He began to believe he was stupid, and he began to act as if he were stupid. "At that moment, I knew for sure that whatever normal was, I wasn't it."

Mooney began to aspire to be normal, meaning like all the other kids who could read, write, and spell without too much effort. He believed that abnormal was the opposite of normal. He felt that he was different but tried to hide it because being normal was accepted. He worked hard at spelling and writing and tried not to look at the teacher when she was asking the students to read out loud. He copied words from around the classroom. According to Edward M. Hallowell in Driven to Distraction, learning disabled children develop their own coping mechanisms.

The author gives a history of the word normal. "It's both a fact in the world and a judgement of what is right." It can mean natural, common, ordinary or typical. It was first used in the mid-1800s by anatomists and physiologists to describe the normal functioning of the organs in the body. In 1835, Adolphe Quartelet developed the concept of the average man, using statistical calculations. He believed that the average man was a model human being who should guide society. But anything that was different would constitute monstrosity.

Francis Galton developed the normal distribution curve and was committed to ridding the world of defectives. In the 20th century a new group of professionals invented the normal, in all its glory, that is still with us today. "What a mess the twentieth century made of normal." All the studies were done with white men. Freud developed theories of normal sexuality. "Normal was created, not discovered, by flawed, eccentric, self-interested, racist, ableist, homophobic, sexist humans. Normal is a statistical fiction, nothing less. Knowing this is the first step toward reclaiming your power to define yourself, know yourself, and love yourself for who you are, not who you should be."

In the late 19th and early 20th century, anthropologists began the practice of measuring body size and shape. They wanted to find "racial" types. This science of measuring humans created a hierarchy and pathologized the people in the ranked categories. "With the introduction of this concept, abnormality became colonized by the medical profession in the mid-nineteenth century." A trait was a sickness or a disease. Black people were subhuman, and women were biologically inferior to men. Galton invented the term "eugenics," which became known as "genetics." He counted ladies on the street with large chests. "I wish the story of eugenics ended here, with Galton counting boobs in a Victorian swingers club."

Adolf Hitler adopted these concepts and issued a mass compulsory sterilization program for children who were mentally retarded or physically disabled. More than 750,000 abnormal or defective adults and children were murdered. (Edith Sheffer, Asperger's Children.)

These concepts were adopted by schools where special education was developed to correct disabilities in their students. Teachers tried to normalize them. Mooney's teachers tried to correct his handwriting. "First, there was the correction of my body positioning. A distance of two fingers must be left between my body and the table, both feet flat on the ground, paper at a 46-degree angle toward the writing arm side, hold the pen or pencil close to the writing tip with the thumb and index finger . . ." The teacher tells him that he'll hear two words that have one sound that is different. He has to identify that sound. "The teacher says cat/fat, map/mop, rap/rat. I say they rhyme. Wrong. I say that the cat can use the mop to de-map the fat rat. Wrong."

It's unfortunate that this medical model is still with us today, and it defines disability as a part of the body that requires intervention. "I lost my sense of self to this perfect storm, because I knew from the start that no matter what my mom said, I wasn't different but deficient." When Mooney finally writes a good story, the principal asks him why he copied it from someone else.

Soccer helped Mooney survive high school. He began to see a therapist, who told him: "You don't need accommodations for dyslexia; you need accommodations for their dys-teachia." He was surprised when he was accepted into Brown University majoring in Literature. He met Dave Cole, who also had learning difficulties, and they became best friends. They even wrote a book in Dave's loft.

Mooney thrived at Brown's and did very well in all his subjects. Dave told him that "the dyslexic brain kicks ass." This means that his brain is not deficient. He was not hyperactive when they were working on the book, and he was handling a full load of classes. "In that loft, with and because of each other, the objectiveness, the naturalness, the inevitability of the categories applied to us began to fall apart"

If he could, would he get rid of his learning disabilities? His answer is no. "I had come to realize that one is not born a person with a disability. One is made into one. The dominant ideas, attitudes, and customs of any society determine the perception of which bodies, brains, and humans are called right and wrong."

Mooney began to see his disabilities as differences. He traveled all over the country and spoke to children in elementary schools. He discovered that each one had a special talent, such as drawing, speaking, or inventing. Some made comic strips and others shared science experiments that won national competitions. (Dav Pilkey, well-known cartoonist, wrote his first comic book for children in second grade, sitting alone in the hall during class as a result of his ADHD. Captain Underpants and Dog Man eventually became bestsellers. He is now a rock star.   Montreal Gazette, Thursday, October 17, 2019, section C, p.1)

Written with humor and compassion, laughter and tears, Normal Sucks will inspire all of us to embrace and celebrate our differences.