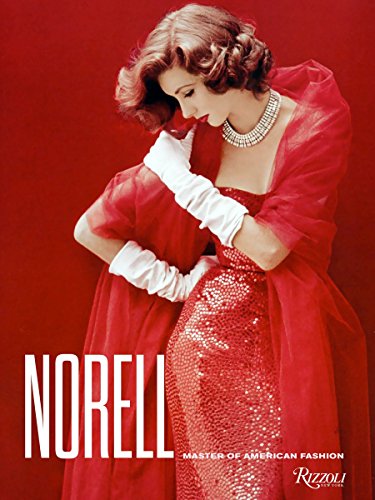 There are libraries filled with books that celebrate the glories of fashion, but there are scant few books that can sit beside Norell: Master of American Fashion. The simplest reason is that this book celebrates an American master and not a Frenchman! Yes, of course the French offer a laundry list of legendary and iconic designers, but the world of Seventh Avenue holds very few in the highest and most esteemed regard, at least until Norman Norell came to be.

From the onset of the book, with its foreword by Ralph Rucci, the stage is set. What is most convincing and commendable here is that Rucci and Norell speak the same fashion language so that there are no empty and frivolous accolades nor any uninformed observations and opinions.

“Norell, in distillation, was about silence. The silence one discovers after a great reduction of elements that went into the creation of a collection and the innovative shapes brought forth by a vocabulary of technique and design history.”

Unquestionably the authors proffer an amazing set of historical and technical facts that are intended to remind and enlighten many of us in fashion that there was indeed astounding talent hatched on Seventh Avenue. There are first hand recollections and incredible aspects of this designer’s oeuvre that have rarely if ever been assembled in one place at one time; for this alone the book is a necessity for those within the  fashion orbit  or who may think they know all there is to know about Norman Norell.

“It’s often said that Norman Norell was something of a genius in the world of fashion. His brilliance and taste in every part of the process . . . were without parallel. But perhaps his most remarkable skill was his least obvious: the inner construction of a garment, the unseen framework that forms and shapes a dress or coat or ballgown into a bona fide Norman Norell.”

The book is extremely easy to read with quintessential images from the Norell archives as well as from two of the most celebrated and iconic of American fashion illustrators of the 20th century, Michael Vollbracht and Kenneth Paul Block. The photographic images pack quite a punch given their size, the accompanying text, and in some cases the incredible details that were captured on film.

There are so many takeaways from Norell: Master of American. The more perceptive among readers will see Norell’s enduring influence stretching into the world of 21st century fashion and that the man knew his stuff both on the outside and inside when it came to his clothes. He had painstakingly relentless standards that he adhered to his entire life, which certainly and immediately sets him apart from today’s so called designers of fashion who should not even carry the same job description as this man.

Another source of amazement is what might be called Norell’s unparalleled skillset and understanding of the fashion business. His design routine began with fabric selection, then with sketches, and eventually ended with him actually being on the floor to sell his clothes, and that is what separates the men from the boys in this business: total immersion.

The bottom line is that this is a hell of way to kick off the new year of fashion related publications. Norell: Master of American sets the bar high and will be used as a barometer for what’s to come all year long. If you’re lucky enough and you are in New York City, you can visit the show “Norell: Dean of American Fashion” at The Museum at the Fashion Institute of Technology from February 9 through April 14.