Norco '80: The True Story of the Most Spectacular Bank Robbery in American History 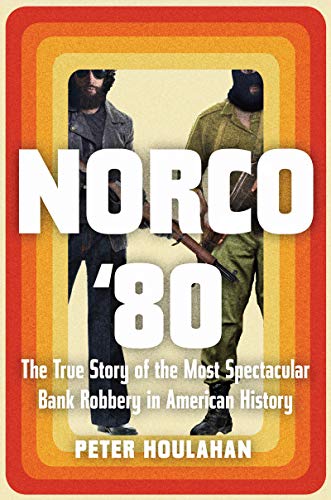 “one of those incredible true crime stories that grab one’s attention and does not let go until the last page.”

Tales of “true” crime have been around since the 19th century right through such publications as True Crime, Argosy, and other magazines into the ’50s and ’60s. They have even been taken up visually since the advent of motion pictures and television in such dramas as Dragnet and Bonnie and Clyde. What seems to titillate readers and viewers is the opportunity to look into the actions, and more importantly, the minds of those who would perpetrate such crimes.

What makes someone commit such anti-social acts? Whatever could they have been thinking, especially when it comes down to believing that one could get away with something like that?

Reasons for doing so and the objectives in doing so are myriad: “I couldn’t get a job,” “I don’t want to work,” instant gratification, the adrenaline rush, the thrill of getting away with it and, in the case of this publication, rather oddly, “we needed the money to obtain the supplies and other necessities in order to survive the End Times coming as described in the Book of Revelations in the New Testament.”

Which begs the interesting question of how could these individuals, some of them baptized, Christian, and professing Jesus Christ as their Savior, justify taking the law into their own hands, as they did, and end up robbing a bank, endangering the innocent, damaging and destroying private and public property, and killing one and wounding numerous law enforcement officers, which later resulted in multiple, and ongoing, instances of posttraumatic stress disorder?

By virtue of their military service, at least two of the five men involved had familiarity with military grade weaponry, including making their own grenades and other explosives. Not surprisingly, the debate over public access to such weaponry continues apace nearly 40 years later. The bottom line is that these were five heavily armed men with a plan to create a diversion for first responders and then rob the actual bank of one of the perpetrators!

It also left law enforcement outgunned and eventually led to the current “militarization” of such agencies that now are about much more than just having a SWAT team. Their arsenal now includes armed helicopters, armored vehicles, and their own high velocity automatic weapons for just such situations as described in this book. Officers also train for them now using a video which references this specific incident.

In any event, this story is a wild ride and a real page turner. The narrative covers the gamut of the individuals themselves, their planning, the robbery, the long pursuit by law enforcement when things went wrong outside the bank, their apprehension, the long and controversial trial of the three survivors, the verdict, and an epilogue that summarizes the future lives and careers of the primary and notable characters in the text.

Although the author is not in law enforcement, a journalist, nor a historian, the style and writing are such as to maintain the reader’s attention. There are no notes; however, sources include many of the public documents, records, notes, articles, and reports generated by this case as well as interviews with as many surviving participants and witnesses as could be located and willing to be interviewed. Some of them wished to remain anonymous, according to the Acknowledgments.

The photographic section includes pictures of many of the participants and locales pertinent to the story and some graphically show the intensity of the firefight and the lead that flew throughout the incident. Notwithstanding the many police officers wounded, it is almost a miracle that more weren’t physical casualties.

Having spent four years researching and writing this story, Houlahan has produced a story worthy of a true crime publication and even, possibly, one for video production, should someone be able to incorporate all of the elements of the tale into a script. The survivors’ trial itself has many twists and turns, never mind the harrowing pursuit of multiple law enforcement agencies that resulted in the expenditure of thousands of rounds of ammunition cumulatively.

This book can be highly recommended to those interested in American history, social history and commentary, the law, or just as one of those incredible true crime stories that grab one’s attention and does not let go until the last page.