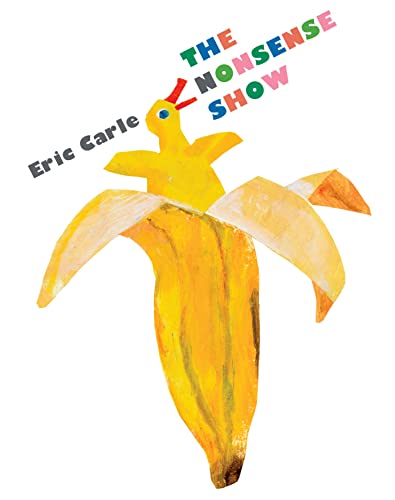 Eric Carle has sold in excess of 40 million copies of his 70 plus books. Remarkably, at 86, he is still creating. From his earliest and most well-known titles published in the late sixties (like Brown Bear, Brown Bear, What Do You See? and The Very Hungry Caterpillar) right up through his newest title, The Nonsense Show, he has relied on his signature use of painted and embellished tissue paper collages. Eric Carle books are instantly recognizable.

Mr. Carle is also well-known for his commitment to educating children about art. The Eric Carle Museum of Picture Book Art in Massachusetts is a testament to this—as are his most recent books. His previous title, The Artist Who Painted a Blue Horse, was inspired by the painter Franz Marc and meant to inspire young readers to embrace their creative impulses, however unconventional they may be.

The Nonsense Show is also meant to stir the imagination, though in this case via the Absurd techniques of Surrealism (though the movement itself is named only on the jacket flap). There is no explicit teaching in the book, which simply presents a series of nonsensical images accompanied by rhyming text. Examples include a rabbit pulling a boy out of a hat, a train puffing sheep smoke, and an upside down man eating cake with his wife. All are illustrated in classic Carle style: brightly and invitingly, with colors that feel rich and deep.

Surrealism’s project was to unlock the creative potential of the unconscious mind through illogical juxtapositions. The nonsense on display here certainly qualifies as illogical, and though it’s hard to predict what effect it all might have on Mr. Carle’s young readers’ creative potential—the show is sure to amuse and entertain them.

That said, are any of the absurdities in The Nonsense Show particularly memorable? Not really. Nor are any of the rhymes. And while it’s hard to imagine this particular project being successfully pitched by a lesser known artist, it really doesn’t matter. Carle has the attention of millions of adoring fans, and in The Nonsense Show he seizes the opportunity to encourage them to play joyfully with words, images, and ideas. Surely such playfulness is the true wellspring of creativity. And that makes this some serious nonsense.