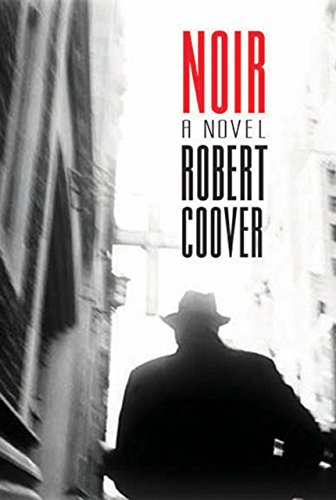 Noir, by acclaimed author Robert Coover, is a brilliant parody of noir and hardboiled fiction and film. Noir is funny yet respectful, showing knowledge of the genre it parodies. Noir is also unusual and avant garde—some might even say “weird.”

For example, the time sequence of Noir exaggerates the jagged twisty form of the typical noir narrative. Flashbacks within flashbacks unexpectedly morph into the present.

And the narration is second-person (“you”), turning the reader into the seedy protagonist, Philip M. Noir. As noir filmmaker Fritz Lange said, “You show the protagonist so that the audience can put itself under the skin of the man.”

Well, under the skin of Philip M. Noir—as good a place as any to begin.

“You are at the morgue.”

That’s right, you. You are Philip M. Noir, a parody of a name as blatant as a .45 crashing down on your skull—which will happen to you a lot as you read Noir.

The story indeed begins at the morgue, where Noir searches for the body of a mysterious, beautiful widow with irresistible legs (gams). But is the widow really dead; and, if she is, why has her body disappeared from the morgue?

At some undefined time in the past, this beautiful widow, veiled and dressed in black, appeared at Noir’s office. Her husband had been killed; or was it a suicide? She feared that the notorious Mr. Big, her husband’s ex-partner in business (or crime?) may have murdered him and may murder her next. The widow wants Noir to protect her. And, of course, there’s an insurance policy involved.

Why the widow hires Noir is a mystery in itself. An incompetent sleuth, Noir trails random people on whims and hunches, hoping to uncover clues. The people he follows—for no real reason—include a philosophizing panhandler and a fat man in a white suit and Panama hat (Sidney Greenstreet?).

Coover is a master postmodernist writer, and he deftly uses parody to dig into the noir genre to pull out meaning from Philip M. and those other tough guys and dames on the dark, rain-slicked streets. And Coover brings out humor—from laugh-worthy, to silly, to slapstick, to kind of stupid (e.g., fart humor).

For example, tough guy Noir, three times winds up wearing nothing but women’s underwear—twice it’s the “silky pink panties” of his secretary Blanche. It always makes sense in the context of the story—sort of. One time, caught in this garb, he slaps on his fedora and lights a cigarette to distract attention from the underwear. That’s funny, kind of.

In another scene, Noir and Blanche enter a drug store to buy cigarettes, but the store is being robbed. In a hurry, Blanche grabs a pack and pays the robbers.

Then there’s the crucial moment when Noir regains consciousness after one of the many blows to his head and realizes that the elusive Mr. Big is talking to him. He opens his eyes slowly as Big speaks. He looks at the hazy figure and soon realizes that Mr. Big is him, Philip M. Noir! Not hard for the reader to believe, the twisty way this plot unravels.

But then he notices a backward “4” behind Big, and realizes that he is looking at himself in a mirror. Funny, but also, a reminder that noir forces us to look at ourselves—our cozy lives and beliefs—in a mirror.

In the midst of the humor—funny or stupid—Coover skillfully brings out the meaning and dark beauty of noir. The philosophy that Coover pulls from this genre comes from the patter of his cops, dames, sleazeballs, bartenders, criminals, and other sordid characters.

Noir himself provides the narration. And the cast includes Rats, a street peddler and stoolie; Snark, a cop married to a contortionist, who passes on info to Noir; and Blue, the detective who is always out to get Noir. There’s also The Creep—a perverse morgue attendant—and more.

These seedy characters in shadowy scenes remind readers that the world can be unforgiving and corrupt—that our lives are comfortable illusions, shattered as easily as the mirror Noir sees himself in.

The reader is reminded of the alienation, disorientation, and angst engendered by modern urban culture; that good and evil are intertwined; that life is twisty and subjective, not leading straight to neat conclusions.

Noir, narrating: “And there was something about these dark nameless streets going nowhere that resonated with your inner being. The desolation. The bitterness. The repugnant underbelly of civilization.” [But then he thinks maybe it’s the chili and doughnuts he ate.]

Noir, drunk: “You got into a slurry disquisition on the world’s inscrutability, how knowing only leads to more unknowing, the world remaining enigmatic, deceptive, dangerous, impenetrable.”

But don’t despair—not too much; art and beauty lay within the darkness. Coover evokes the steamy, shadowy scenes of film noir so perfectly that the reader can see the settings. The parody comes in how thickly and incessantly the author piles these scenes on.

Yet, taken in themselves, some of these film noir evocations are striking in their dark beauty and poetic clarity.

For example, the description of a place of evil called only “the docklands:”

“ . . . lit only by dull swinging streetlamps, the reflective wet streets more luminous than the lamps themselves, though casting no light of their own . . .”

And later, again at the docklands:

Who is this book for? “Not for everyone” echo the reviews. Is it for mystery fans? Not those who like stories with a clear chronology ending in a triumph of good over evil.

Noir fans? They might have to read the book from a new perspective, realizing that it doesn’t ridicule their genre, but respects and has fun with it.

But most basically Coover’s Noir is for readers who enjoy offbeat, avant garde works, perhaps Paul Auster’s New York Trilogy or Thomas Pynchon’s V or more recent Inherent Vice. And Noir would play well in the classroom, a perfect counterpoint in the study of noir fiction or film. Perfect also for the study of terms such as metafiction, deconstructionism, and self-reflexivity. (No sarcasm meant here, really.)

Noir is a funny, silly, but often serious romp though an improbable dark underworld. It’s also a smart, rewarding read that gives its audience the choice to work hard and think deeply—or not. It’s an exceptional work of art.