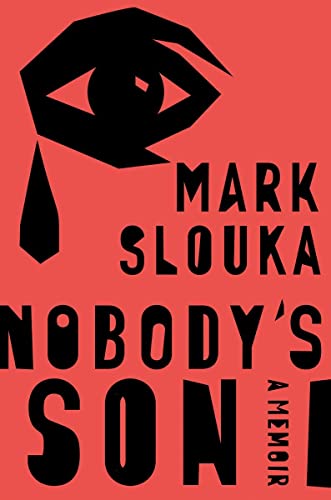 Nobody’s Son is the culmination of a family’s gradual demise. Exiled, humiliated, poor, and insecure, they attempt to forge life as a family, only to be torn apart by depression, abuse, and resentment.

“Year after year, she executed the sentence and endured it, inscribing into her skin deeper and deeper, the names of the things she had loved and lost, creating a self-portrait of unendurable pain and unbendable endurance in perfect equipoise, like two wrestlers matched to the last atom until – when the man she’d loved left her for good, when the past she mourned became familiar and dull, she invented losses that never occurred, like the loss of my love, and mourned those.”

Spanning many decades and two world wars, author Mark Slouka takes perfect aim at his life and the lives of his parents. Nobody’s Son is a profoundly thorough examination of a family in exile from their beloved homeland and from each other.

The author examines layers of neuroses, breaking down his parents’ lives and revealing his mother’s harrowing trips from periods of pure delight into the profound depths of punishing depression and rage. Slouka observes a distinct pattern of highs and lows in her life. Was she bipolar?

Born in Czechoslovakia, they survive the Nazi occupation only to be forced into exile by the communist regime that followed. With barely a day’s notice of his father’s pending arrest, the couple escapes to Innsbruck, followed by Australia, then Germany and New York, before finally returning to Czechoslovakia.

The focus of this exceptional memoir is upon Slouka’s mother, a woman both tragic and delightful; a larger than life personality who pours the depth of her bitter experiences upon those she loves the most: her son and her husband. Gradually driving them away, she erodes into a despair of catastrophic memories, haunted by love found and lost, into an ocean of depression, anger, and resentment. Eventually, dementia steals the memories and she dies alone, far from the son and husband she drove away. The one person who might have saved her, a lover in Czechoslovakia, is tragically lost from her life.

This memoir is an autopsy of his mother’s soul, written near the end of her life. This exposé of lost opportunities offers a revealing glimpse of her exhilarating joy and relentless rage. She is capable of immense beauty and delightful laughter, but tormented by unresolved anger and guilt. Her husband and son are the rocks that break under the vast weight of her steadfast fury.

Covering two world wars and decades of personal struggle, this is a thought-provoking examination of the author’s family history, warts included. Acutely personal and agonizingly incisive, the author peels layers from his mother’s neuroses until only the innocent child exists, made pregnant by her own father and forever damaged emotionally.

Evocative and brilliant, Slouka’s talent shines in this touching memoir. His eloquent language and creative metaphors make this book a must read. Each delightful victory and cruel loss is examined within the cold, frozen light of analysis. Often cruel and tormenting, occasionally beautiful and charming, the author struggles mightily to elicit reason and fact from the confabulation of his fragmented memories.