Noble Savages: My Life Among Two Dangerous Tribes—The Yanomamo and the Anthropologists 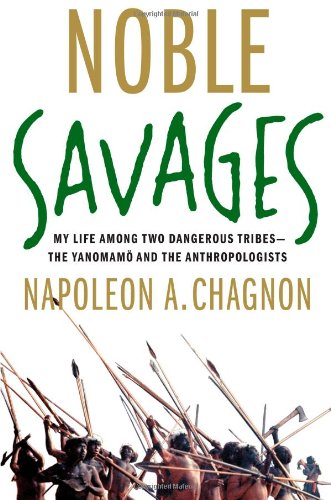 “Noble Savages continues to tell the stories of the Yanomamo, asking its readers to make sense of humanity’s place in nature.”

It’s hard to imagine a more well known anthropologist than Napoleon Chagnon or a better known associated tribe of study. Arguably, the names Chagnon and the Yanomamo of the Amazon are inexorably linked in the public’s perception of field anthropology and certainly inevitably intertwined in the intellectual controversies of the academic arena.

In Noble Savages: My Life Among Two Dangerous Tribes—The Yanomamo and the Anthropologists, Mr. Chagnon negotiates an extremely tricky genre. Noble Savages is one part memoir, one part cultural anthropology, and another part commentary about anthropology’s intellectual space in the 21st century. The book brilliantly brings together all of these components in interesting and introspective ways.

Noble Savages begins by offering the reader a glimpse into Mr. Chagnon’s original research impetus: the anthropological questions that motivated him and the science and humanism swirling around these topics within anthropology.

In reading the early parts of Mr. Chagnon’s research—itself an unflinching and unapologetic scientific approach to the discipline—the reader becomes acquainted with the Yanomamo as Mr. Chagnon did during the 35 years of his academic life.

Mr. Chagnon describes some anthropological truisms his work highlights—namely, the ubiquity of terror; the importance of security; sociality and the demographic facts of life; leadership and social cohesion; and the political evolution of the tribe; however, the reader quickly sees that these questions of social organization of the Yanomamo were answered in ways completely unexpected within accepted paradigms of cultural anthropology.

In short, the reader is fronted with the Yanomamo as a complex culture—violent and warfaring— not easily slotted into Rousseau’s theorized state of nature and social tranquility.

With this background to the pertinent academic questions, we see Mr. Chagnon begin to weave his twin narratives of twinned “dangerous tribes”—the Yanomamo and anthropologists.

On the one hand, the reader sees the difficulties of field work and the shear force of will that comes from trying to wrestle out data and information from the time in “the field” with the Yanomamo.

The difficulties in doing something as mundane as making coffee are quickly multiplied against a backdrop of jaguars, disease, insects, poor communication, the list goes on and on.

On the other hand, the reader sees the difficulty that the interpretations of the field results faced when confronted by an anthropological establishment unable to accept evidence of violence and warfare. The two “dangerous tribes” appear to clash with the interpretation of Mr. Chagnon’s research as the crux issues.

Noble Savages is a compelling read—certainly within the history of anthropology and definitely within the traditions of memoir and autobiography.