Noah Webster and His Words 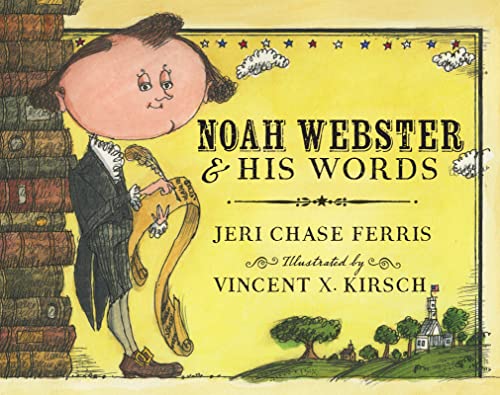 “Noah Webster and His Words has something for everyone: nostalgia, history, entrepreneurism, and last but not least, a few good old-fashioned belly laughs.”

Nobody likes a wordy writer . . . unless that writer is Noah Webster. In Noah Webster and His Words, author Jeri Chase Ferris writes a firsthand account of the amazing life and wordy times of Noah Webster. She also unravels some of history’s mysteries in the process.

Young Noah of Hartford, Connecticut, hailed from a long line of potato, bean and corn planters, but he preferred to keep his head in books. Unfortunately, the few books of his day were written by the British about the country of England.

America had no books of its own.

After Noah finished college and became a teacher, he noticed there were still no American books, so he went right to work. His first work was a speller with a blue cover that people nicknamed “the blue-backed speller.” Noah preferred to call it “the second Declaration of Independence” because he knew the knowledge it contained would set people free.

With this speller, Noah brought much needed uniformity to the American language, so that words like “mosquito” were no longer spelled differently (“moskito,” “miscitoe,” “misquitor,” and “mukeetor”) in different states.

Noah also wrote a grammar book and a reader, and started a newspaper and a magazine that he later dissolved. These brought him fame and wealth, but his greatest accomplishment may have been in 1807 when he began writing a dictionary that would explain every word in the English language, and trace each word’s origin.

Eighteen years and 2,000 pages later, a weary-eyed Noah completed his colossal work and gave new meaning to the phrase, “he kept his head in the books.”

Noah Webster and His Words has something for everyone: nostalgia, history, entrepreneurism, and last but not least, a few good old-fashioned belly laughs. Ms. Ferris’ age-appropriate sentences are full of enough cheeky humor to keep adults and children laughing from the first page to the last, yet she cleverly peppers this humorous text with great vocabulary words for the burgeoning reader. These words are instantly defined within the sentences instead of the typical back-end glossary.

Artist Vincent X. Kirsch has a field day with this delightful story, offering up quaint caricature-like illustrations that include pumpkin-sized heads, humongous feet, and sweetly studious facial expressions. The book is laid out in an early 18th century historical font (PS 1722), and each page’s background is nostalgically spacious, reminding readers of a kinder time in a gentler nation when the great outdoors—trees, fields and general nothingness—were all there was to see.

And the mysteries unraveled? Why, Noah had red hair (who knew?). He also lectured across the United States about establishing a national language and a national government. And his “blue-backed speller” of 1783 was still in use when the newly freed slaves set out to get themselves an education in 1865.