No Way Back: A Novel 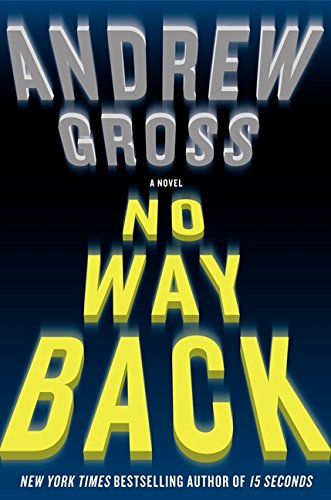 Fueled by anger left over after a bitter quarrel with her husband, a girlfriend who failed to show up for a drink, and one too many margaritas, Wendy accompanies a charming journalist she met in the bar to his hotel room. Bad decision.

Realizing at the last minute that adultery isn't really her thing, Wendy flees to the bathroom to dress. Just as she is ready to leave she hears voices. Peeking out the bathroom door, she sees a man deliberately murder Curtis, her would-be lover. "As I stared through the slit in the doorway, it was clear—a hundred percent clear, in that horrifying split second—that he had to know I was in there. His next move would be to come for me."

Picking up a gun the murderer had left on the floor so it would appear Curtis had been armed, Wendy demands the killer drop his weapon and raise his hands. "Lady, you have no idea what you stepped into . . ." he says as he points his gun at her. Wendy shoots him in self-defense.

Wendy checks the murderer for signs of life and finds his ID folder. That's when she knows she can't call the police or ever tell her husband she was in a hotel room with a complete stranger. She has just killed an agent for the Department of Homeland Security.

She is home before she realizes she has left a folder with her name and address on it in the hotel home. The agent's partner will come for her, she and her husband will be shot, and no one will ask any questions, such as what story was the journalist working on that made him such a danger to the Department of Homeland Security.

Meanwhile, Lauritzia Velez, a Mexican national fleeing the revenge of the leader of a Mexican drug cartel who has already murdered her entire family, is caught in a mall shooting that ends with the shooter being killing by the police.

Lauritzia knows she was the killer's target, realizing she must run before the drug cartel finds her again. Her wealthy employers persuade her to apply to the court for asylum, but she loses. ". . . it was as though the government was siding with this monster. Why?"

The kind of nail-biting, heart-pumping suspense the readers expect from Mr. Gross is delivered in No Way Back. The stories of Wendy Gould and Lauritzia Velez intertwine as two strong women search for answers to their separate but interrelated problems. Drug smuggling, gunrunning, corruption, and coverup at the highest levels of government combine in a plot that Mr. Gross might have torn from the latest headlines. Think of the ill-conceived government sting called Fast and Furious, and imagine two innocent women caught in the crossfire.

No Way Back is a masterful thriller that rings true, leaving the reader exhausted from the adrenaline rush evoked by its escalating suspense.