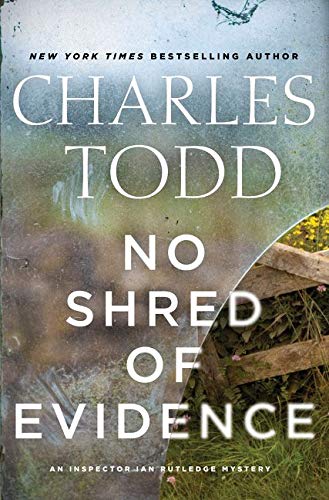 Charles Todd’s Inspector Ian Rutledge of Scotland Yard mystery series illustrates the psychological and physical toll paid by soldiers who fought in the trenches of World War I. The struggles by returning veterans to adjust to civilian life while coping with Post-Traumatic Stress Disorder, although generally called “shell shocked” at the time, is a recurring theme in all the Inspector Ian Rutledge mysteries.

The manifestations of the condition, such as delusions, visual and auditory hallucinations, and panic attacks, play out against the background of a police investigation and have a major impact on the plot. It is no stretch to say that without his struggle to cope with his own PTSD, Ian Rutledge would be a much less interesting character.

Inspector Rutledge is sent to Cornwall by Scotland Yard to replace a detective who died from a heart attack before he could finish his investigation into a homicide case against the four young daughters of very respectable families.

The girls insist that they were trying to rescue Harry Saunders after his dinghy sinks in the river. A farmer, Mr. Trevose, who dives into the river to help pull young Saunders into the girls’ boat claims he saw the girls holding Saunders’ head underwater in a failed attempt to drown him. “I made no bones about what I’d seen. I told them flat out that I knew they had tried to kill Saunders.”

An aggravating circumstance is the fact that one girl, Victoria Grenville, the local magistrate’s daughter, apparently hit Saunders in the head with an oar. She claims she was hoping Saunders could grab the oar to keep himself afloat until they could reach the riverbank. Trevose insists Victoria’ action was deliberate. It is a matter of Trevose’s word against those of the four girls, and Constable Pendennis arrests them on a charge of attempted murder. “But he’s a man of good reputation, sound as they come. Why would he lie about what happened?”

That is a good question, but an equally good question is why would the four girls, two of them visitors new to the area, want to murder Harry Saunders?

Unfortunately Inspector Rutledge has no idea, and the statements and notes from his now deceased predecessor in the investigation have disappeared. There are no witnesses to the incident except Trevose and the four girls, because Harry Saunders dies before ever recovering consciousness. The charge of attempted murder becomes a charge of murder, and Harry’s parents demand the girls be sent to jail to await their trial instead of being under house arrest at Magistrate Grenville’s home.

Rutledge orders a search of the river for Saunders’ dinghy. When it is found with holes drilled in the bottom it is the indication that the girls are telling the truth: Saunders was in his own dinghy, and it sank very rapidly. That still doesn’t answer the question of whether Victoria hit Saunders deliberately or accidentally. There is no evidence either way.

Rutledge investigates Harry Saunders. Is there a reason for Victoria Grenville to want to kill him? The inspector turns up a mysterious woman whom Harry Saunders escorts to church. No one knows her name, and the elderly vicar who claims to be her cousin refuses to reveal her name or where she went after leaving the cottage she rented for the summer. The owner of the cottage claims it was rented by two spinsters, a lie as Rutledge well knows. Who is this young woman? Was Victoria in love with Harry Saunders although she vehemently denies it, killing him because he jilted her in favor of this mysterious, unknown woman? That seems farfetched to Rutledge.

Then there is the secret between the accuser, Trevose, and Victoria Grenville’s mother, a secret from the past that may be the motive for the present tragedy. “It’s a long time to nurture a grudge,” Mrs. Grenville tells the inspector. That is true but Rutledge knows a grudge can last for decades if there is guilt behind it.

There is also the horribly burned and crippled brother of Elaine St. Ives, one of the accused girls. Supposedly he never leaves his home because people stare at his scars, and besides, he can barely walk. But the villagers whisper that he walks at night when no one can stare at him. He was also a friend of Harry Saunders, or had been before the war. Could one of St. Ives’s sudden fits of rage cause him to sabotage Saunders’s dinghy out of a sense of resentment? Harry Saunders spent the war in Washington as part of a delegation trying to persuade America to join the Allies; St. Ives spent his war in the trenches, and his wounds effectively destroy his life.

When first the owner of the rental cottage where the mysterious woman stayed is murdered, followed by the severe beating of the vicar, who also knew the woman, Rutledge knows that whoever this woman is, she holds the key to the violence that begins with Harry Saunders’ death.

The themes of the lasting impact of WWI on those who fought, as well as those on the home front who saw husbands, brothers, sons return horribly maimed or not return at all, underpins and strengthens what would be an ordinary whodunit. Even a hundred years later the sacrifices made by soldiers who marched off to war in the innocent expectation of glory resonates with the reader. These young men are represented by Inspector Rutledge, whose mind is damaged by the war.

No Shred of Evidence, while not the strongest book in the Inspector Ian Rutledge series, still is worthy of his readership’s devotion to his flawed and damaged character.