No One Would Listen: A True Financial Thriller 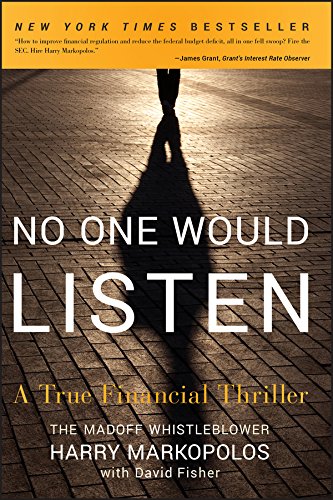 For years, Hollywood has been selling the story in which a regular guy gets threatened by the minions of an evil government, only to win out against all odds in the end.

That’s more or less the true story told by Harry Markopolos in this book.  Markopolos fingered Bernard Madoff as a fraud eight years before the Securities and Exchange Commission finally prosecuted him.

The real villain of the book isn’t Madoff, whom Markopolos never met, but the SEC, which dismissed Markopolos’ well-researched allegations on four different occasions. Markopolos even managed to get his charges into a respectable financial magazine, but the SEC paid no heed.  By refusing to listen to Markopolos, the SEC placed him in the dangerous position of being a maverick critic of a prominent financier, one whose clients included at least the Russian mafia, and probably some other groups that employ hitmen.

The predicament changed Markopolos’ life and his career. He went from being a successful derivatives analyst to becoming a professional whistle-blower—he now spends all his time uncovering financial fraud. He lived in fear for many years, and his personal life suffered. Ironically, what probably saved Markopolos is that he wasn’t ever a threat. The SEC didn’t take him seriously, and so Madoff didn’t have to bother much with him. In the one article that appeared in the press, which asked dangerous questions, Madoff gave a long interview and appeared to address most of them.

There is a great deal too much in the book about Markopolos himself, his family, his friends. At one point several pages are dedicated to a sailing trip made by one of Markopolos’ colleagues. One can appreciate that this book is Markopolos’ one chance to blow his horn, but where is the editor?

With all that said, the book provides a really insightful look into the world of high finance, and the best explanation of the Madoff fraud. Markopolos didn’t ask to chase down Madoff; he was forced to by his bosses who couldn’t understand why Markopolos couldn’t come up with a product that would compete with what Madoff seemed to be offering.  Markopolos reverse-engineered the Madoff offer, only to find that the return Madoff was making couldn’t possibly be justified by the means he used.

The joke is that Markopolos wasn’t the only one. There were several important players in the business who knew that Madoff was pulling a fast one. He had to be: No one can earn a return of more than 1% on equities every month regardless of market conditions. But Madoff was connected, and respectable, and there was no one else to answer the questions asked.

Interviewed in prison, Madoff himself admitted that he couldn’t understand why it took so long for him to get caught. He was on the record for making certain trades, yet these trades actually never took place. All the SEC had to do was to see if the trades Madoff recorded were real. There is a valuable appendix to this book that goes into all the detail of what Madoff did.

The SEC comes out looking awful from its portrait in this book, and some of the best scenes in it describe Markopolos making his case to them. He might as well have been speaking Greek. The lawyers at the SEC were Washington insiders with more interest in politics than in the financial world they were supposed to be regulating.

Finally, Madoff fell—not through any regulatory effort, but simply because the credit crunch tied up the liquidity he needed to keep his Ponzi scheme working. Markopolos becomes a hero, gives testimony to Congress, and blackens his nemesis in Washington. There is a lovely scene where one of the top people at the SEC actually bursts into tears after talking to Markopolos.

The SEC now has a new chief, and seems to be changing its ways: taking on Goldman Sachs, beefing up its monitoring, etc. Markopolos himself recently gave faint praise to its efforts. But after Markopolos’ testimony, it will take some really impressive work to live down the scandal that he raised.

And, yes, Markopolos seems to live happily ever after. Watch for the movie, but read the book.