No Girls in the Clubhouse: The Exclusion of Women from Baseball 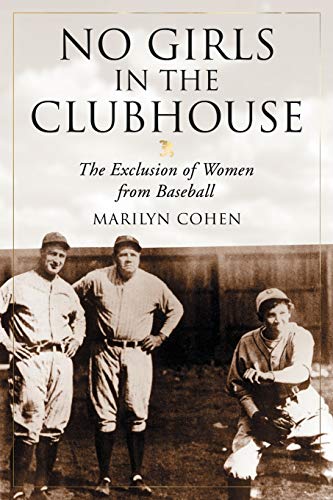 It’s not unusual for scholars to come up with approximately the same idea at about the same time. In 2009 we benefited from the publication of two excellent books about the way girls and women have always played baseball despite regular discrimination against them through cultural pressures as well as outright sexism. Each of these two books, one by Marilyn Cohen and the other by Jennifer Ring, offers new insights as well as up-to-date historical surveys of the relationship of women and girls to the national game.

Marilyn Cohen examines the phenomenon of ball-playing women from the point of view of its impact on the culture as well as its effect on the women themselves. She shows how the success of those young women who have managed to succeed in playing on high school baseball teams, for example, has affected the playing lives of the young men who dominate those teams: most young men find it difficult to accept the women as teammates in what used to be a masculine preserve. And she shows the related effect on the women: they have to put up with sniggering remarks and scornful attitudes as well as the rejection by other young high school women who might have been their friends.

Perhaps the most effective assertion in No Girls in the Clubhouse is the author’s statement—which she is able to prove by many examples—that there is no reason women and girls cannot play baseball. Yet the negative social effects of their presence in baseball that she presents so clearly seem to contradict that assertion. Young women’s participation comes at such a high social cost, both to the women themselves and to the young men who are their teammates, that for many girls their participation isn’t worth it. Those who have been through attempts to break in, either as girls trying to play Little League ball or as young women on high school and college teams, often report that they drop out of baseball not because of inability to play at the required level but because of the emotional and social strain the participants undergo.

Some women, however, have so much courage that they can weather these stresses even at the professional level. Cohen reviews the stories of famous female players like, for example, Toni Stone, Peanut Johnson, and Connie Morgan, all of whom played successfully in the famous professional Negro Leagues and gained grudging respect among teammates for their accomplishments. But not all women have the confidence of these players or of determined girls like Julie Croteau, who paved the way for others in high school and college baseball. Even Croteau, however, gave up attempts to enter men’s teams because of sexist pressures.

In this book Marilyn Cohen also evaluates other temporary female successes, like the women of the All-American Girls Professional Baseball League of the 1940s-50s, explaining this league as an example of “socially acceptable feminine athleticism” whose participants fit into the culture because they were “treated as children” and were thought of as the “daughters” of their fans, who often sheltered them in their own homes, as families would safeguard any young women in need of protection while waiting for marriage. Cohen’s sociological view of the AAGPBL’s success is fresh and new, and although it does not apply to all the young women on All-American teams (some were already married), it is a cultural factor worth considering in helping to explain the transient success of the league.

The author compares the success of the AAGPBL with the failure of the Sun Sox and the Silver Bullets, two other attempts at women’s professional ball, in part by pointing to the differences in their uniforms: the AAGPBL’s short skirts, which resembled the Betty Grable pinup of World War I, compared with the standard baseball uniforms worn by the Sox and the Bullets, uniforms that were linked with masculinity. The public, Cohen believes, finds it difficult to view women as ball players because of the crossover in “role identity.” Wearing a uniform that men wear epitomizes that crossover.

Cohen discusses an intriguing term used to explain and excuse boys and young men who desire to keep their all-male teams secure from invasion by females. Defenders of masculine exclusiveness describe this desire as a need for “islands of privateness” for males. Cohen points out cleverly that what they really want to keep is “islands of privilege,” for the attention given boys and young men who want to play baseball is never given in comparable amount or degree to girls and young women. That’s why girls and women constantly try to enter those masculine “islands”: it’s not that they want to play with men, they just want to play.

In presenting a solution to the gender problem in baseball, Cohen suggests a women’s league with its own farm system, building on the Little League age group and going on to girls of an age to play American Legion ball and then high school and college ball, without any of the breaks in continuity that ambitious girls must now endure. Boys have long benefited from the continuity in organizational services that helps them keep improving their skills as they get older and points them directly to professional careers.

In this book Marilyn Cohen contributes a unique and valuable sociological viewpoint to the study of the history of women in baseball. Along the way, she uses many sociological terms like hegemonic, normative, heteronormative, situational complexity, androgynous socialization, and dichotomous construction, terms that it’s easy to stumble over. But her use of such terms wanes as the story unfolds, and they do not detract from the importance of Cohen’s contribution to our understanding of women in baseball.

Jennifer Ring’s book, Stolen Bases, in contrast with Marilyn Cohen’s, derives in part from personal experience. Although Ring, too, is an academic, her view is less sociological and more historical. It opens with her own daughter’s experience as an excellent player, performing at a level at least as high as her peers but being discriminated against multiple times because of her gender. Cohen’s daughter is lucky in having a mother who helped her find alternate places to play when coaches favored boys, especially those whose dads they knew.

Ring’s admirable historical research into women’s history leads her to the conclusion that “The national game has been declared the domain of only half the nation.” She points out that because of large omissions, the baseball film by Ken Burns left the erroneous impression that boys had played the game much longer than girls, whereas in fact even the earliest varieties of baseball were enjoyed by English girls as well as English boys.

For part of her research Ring cites information about very early women’s teams for which she credits Harold Seymour, my late husband and colleague, as the author of Baseball: The People’s Game. Actually, it’s material that I, not Harold Seymour, discovered. As I revealed in my autobiography, A Woman’s Work: Writing Baseball History with Harold Seymour (McFarland 2004), Seymour lacked the grace to add my name to the title pages of the books we prepared as a team for Oxford University Press, so Ring doesn’t realize that I was the one who collected and wrote the information about women’s play. Nor does is she aware that since the publication of my autobiography, scholars like Jean Hastings Ardell (whom Ring cites) have been listing the Oxford books more accurately as written not by Harold Seymour but by Harold and Dorothy Seymour.

Ring also seems startled by the difference between the emphasis on the “manliness” of baseball in the first Oxford volume, published in 1960, and the revelation in the third volume, published in 1990, that women as well as men played baseball very early. Women were being marginalized, she says, “in spite of the fact that Harold Seymour himself acknowledges that they were among the first players of the game.” Actually, it was I, not Harold Seymour, who acknowledged that fact. I managed this by taking over all the work on the Oxford books in the 1980s, then performing the research on early baseball play by women, and seeing to it that the third book included five solid chapters presenting the information on women that had been neglected in the first volume.

One of Ring’s most important points is her cultural analysis of the tension between men and women. American boys, says Ring, are taught that being a boy is not just different, it’s better. Boys thus view the presence of girls or women in any activity as a challenge to masculinity, a challenge they lack the confidence to withstand. “Men are still worried,” Ring says, “about not being men.” That’s why they are most comfortable in circumstances where women are barred.

Consequently, Ring explains, most coaches try to keep girls off baseball teams. They do this in order to protect the boys’ feelings. Coaches know that if girls on the team prove to be too good at the game, the boys might be embarrassed. Girls sense this position on the part of coaches. Thus they are taught the lesson that their own well-being must be suppressed for the sake of the boys. That lesson reminds me of the film “Annie Get Your Gun,” in which Annie Oakley, in order to attract the man she wants to marry, pretends to fail at target shooting so that her boyfriend can win the competition. In the film, this self-denigrating act of bowing to the male ego is presented as perfectly acceptable—as it was in the 1950s.

To Ring, the answer for girls may be club baseball, which is extremely popular in Australia and which Justine Siegel of the Women’s Baseball League told me last year that she plans to introduce in Canada. In the club system, girls and women in a community or a university form a large club, then field teams in various sports, such as golf, soccer, baseball, and tennis. They pit their teams against those of other large girls’ or women’s clubs. The Australian clubs nurture teams of youngsters so that those of older players benefit from an underlay of promising youngsters being groomed to move up to the teams of the more experienced players. The club baseball concept might cover the problem of “feeder” teams that Marilyn Cohen points out are needed if girls are to have the continuity in their playing lives that boys now enjoy.

Both these writers, Marilyn Cohen and Jennifer Ring, appear to focus mainly on girls and women playing only members of their own sex in their own leagues rather than trying to invade those now monopolized by boys and men. This leaves high and dry those women who want to prove that they play just as well as men and harbor the same desire to reach the big leagues that men do. So neither of these analysts truly addresses the deepest problem in the baseball relation between the sexes: women challenging men on what males have made into their own turf.

Because we have long organized baseball play by gender, nearly everyone thinks baseball is for men. After I gave a bookstore presentation about my latest book, Chasing Baseball (McFarland 2010) and described the current popularity of baseball among women, the inevitable question arose: “Do women play by men’s rules?” The audience seemed startled by my reply: “There are no men’s rules. The only rules are the rules of baseball. Men don’t own them. Anyone can use them, regardless of gender.” Jennifer King and Marilyn Cohen would agree with me.