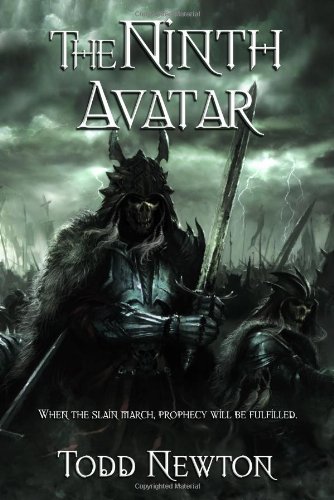 The genre of epic fantasy fiction is filled with characters called Zorg and Byorg and places with names like Narnia and Ambrosia and Farsala and Tigana—all of which can be quite daunting when starting to read from page one. In this respect, The Ninth Avatar provides a very helpful map at the beginning of the book that illustrates the terrain where the action takes place. There are areas called Bloodwin and Northern Waste and Great Watchtower, and settlements (cities) called Brong and Rochelle.

The prologue opens with a battle between the human forces of Brong and Rochelle, which is at a stalemate—until both armies are surrounded by Carrion soldiers, an army of undead who absorb the bodies of those killed in battle into their ranks, commanded by a vicious leader called Zion. The Carrion Army quickly defeats the combined forces of Brong, Rochelle, and Zion then calls upon the power of the Wizards of Illiadora to rain down hundreds of fiery meteors on the settlement cities. Zion then turns his wrath on the Wizards.

The reader could be forgiven, at this stage, for thinking: oh no, not another 370 pages of swords and sorcery, with little meaning or relevance to anything other than an overactive adolescent imagination—or, indeed, another self-indulgent excursion into fictional and inaccurate Germanic or Druidic folklore. However, as the book progresses into the story proper, a theme begins to emerge which, like the works of Tolkien and Gemmel, is not totally alien to circumstances and situations in the real world including motifs such as identity, morality, and fraternity.

Starka is a young priestess who has been expelled from her order because of insinuations of incest with her missing brother. She has vivid, terrifying visions in the form of fits, which prophesy doom and darkness. She is sent on a mission by her seeress, Elestia, along with Wadam, a priest who wants to take over as sole leader of the religion. A tidal wave causes Starka to fall overboard, and she is washed up on a dangerous shore where a battle has taken place. She is saved from Carrion soldiers by a warrior called DaVille, who is marked with the Ninth Symbol and who was once a Carrion general, but who chooses balance over darkness.

Starka forms a loose alliance with a group of misfits, including DaVille; Wan Du, the sole survivor of Brong; Cairos, the only wizard left after the destruction of Illiadora; and the Lady Mayrah from Rochelle. Cooperation is difficult between the members of this diverse and marginalized group, but they must learn to work together to overcome the dark Carrion forces that threaten to engulf the entire world, and prevent Zion from becoming The Ninth Avatar, the physical incarnation of The Ninth Pillar of Darkness—which would plunge all humankind into constant war. So begins a quest to prevent the prophecy.Notwithstanding the seeming density of the plot and the inevitable exposition that must, by necessity, accompany it, the book moves at a satisfying pace. The narrative is well thought out, despite some required leaps of faith, and provides a decent serving of food for thought. The characters are well developed, unique, and intriguing. They are by no means two-dimensional cyphers, nor are they homogeneous in a way which might be seen as peculiar to the genre—they are complex, with elements of good and bad, dark and light, interwoven within the ethos of their quiddity—much as real-world beings are.

From a literary point of view, and not as a connoisseur of fan-fic, the book probably needed to be a series in order to fully detail everything that’s happening. Several critical occurrences are lightly sketched over and there are narrative ambiguities in this ultimate tale of the triumph of good over evil, right over wrong, and the premise that these dichotomies will always exist in an imperfect world. The dialogue was fresh and found the right balance between modern and archaic, while the chapters are astutely spaced for a satisfying read.

Although a formulaic genre by definition, The Ninth Avatar fits well into Trapdoor Books’ definition of “geek fiction”—“. . . breaks the boundaries of formulaic writing . . . introduces intellectual acumen and provides a thoughtful, entertaining diversion . . . challenges the reader with well-paced, well-researched, compelling stories.” It is a very readable book and will be consumed with relish by lovers of the genre.

Reviewer John F. McDonald is an award-winning novelist, screenwriter, playwright, and graphic novel adaptor of the works of William Shakespeare.  His novels include Tribe, Talking to God, and Otherwise Kill Me and his screenplay, Tribe, is currently in pre-production.  He is a member of The Society of Authors, The International Screenwriters Association, and The Royal Shakespeare Company.