Ninja: 1,000 Years of the Shadow Warrior 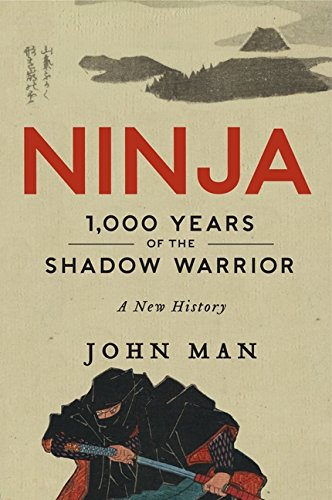 “. . . it would be helpful if the book were more specifically focused on both the history of the Ninjas [and] how the practices of Ninja spirituality can benefit martial arts practitioners today.”

It was with great anticipation that I began to read John Man’s work Ninja: 1,000 Years of the Shadow Warrior. Having been a martial artist and a historian for many years, this work seemed like the perfect combination of two of my life’s major interests.

Unfortunately, I was sadly mistaken. Ninja failed to satisfy both the historian’s desire for a cogent narrative and the martial artist’s interest in learning more about the philosophical underpinnings and anecdotal details of Ninja life and practice.

Why is this the case?

The book starts off well with a discussion of the origins of the shinobi (ninjutsu, the Ninja martial art) in the Chinese Qin Dynasty through Emperor Zheng, circa 221 BCE. The author describes an assassination attempt on the Emperor by Jing Ke, an associate of the renegade general Fan Yuqi. As Mr. Man notes, “He is a man with nerves of steel and high intelligence, who likes to read books and practice swordsmanship—in brief, the essence of a true Ninja.”

Key to the early development of Ninja clans in Japan, circa AD 1400, were the concepts of “deception” as developed by Sun Tzu in The Art of War as well as and “correct mind.” Deception is characterized by Su Tzu as follows:

“All warfare is based upon deception. Therefore when capable of attacking, feign incapacity; when active in move troops, feign inactivity. When near the enemy, make it seem that you are far away when far away make it seen that you are near.”

Mr. Man notes that deception is also based on the use of spies who intellectually develop a foreknowledge of enemy/opponent activities and that this foreknowledge “cannot be elicited from spirits, nor from the gods, nor by analogy with past events, nor by astrologic calculation. It must be obtained from men, namely spies.”

The idea of “correct mind” addresses directly and complements the Ninja approach to spirituality. As Mr. Man notes, the emphasis was on not doing evil. He contends furthermore that “The ninjas believed in peace. They gathered information in order to avoid as much war as possible. They were dedicated to the idea of killing only if necessary—and to their own survival. They practiced martial arts only for self defense.”

Martial arts as self defense is the key to its practice throughout the centuries—even though these disciplines have now been waylaid by the popularized MMA in the form of a decidedly “unspiritual” cage fighting.

After this excellent start, it is decidedly at this point that the book itself heads south, losing focus. The meandering path in Ninja begins with a discussion of the Ninja clans of Iga and Koga, the two great centers of resistance to both rule by the Emperor and then eventually by the Shogun. What we are provided with is a series of vignettes regarding these warrior families that are both anecdotal and floating, untied to the narrative/storytelling arc.

The key to this discussion was a review of both these clans as democracies operating within a feudal Japanese framework. Mr. Man states: “In the sixteenth century, while the rest of Japan fought itself to exhaustion, the two neighbors, Iga and Koga, shared similar social systems, family connections, and ways of cooperation. With their councils and contracts, they were remarkable little semi-democracies [Sort of: As in ancient Athens, only the top men counted; women and servants didn’t.] They were also capable of operating outside their own borders, designating ten men from Iga and twelve from Koga to meet up on the frontier to sort out the problems between them.”

At this point the book continues to meander to the end with no discernible philosophical or narrative underpinning. We are told about the Japanese Nakano spy school during World War II and are treated to a discussion of Niroo Onoda, the last Japanese survivor to be found in the Philippines after World War II. But it is difficult to ascertain why the author found this discourse necessary.

As noted earlier, it would be helpful if the book were more specifically focused on both the history of the Ninjas with a more cogent narrative describing how Ninja practices contributed to that history and special reference as to how the practices of Ninja spirituality can benefit martial arts practitioners today.