Nine Days in May: The Battles of the 4th Infantry Division on the Cambodian Border, 1967 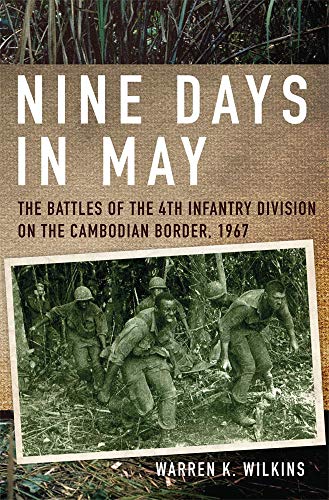 War is never pretty, and in the case of Vietnam less so for a variety of reasons. Those who served there deserved better than we gave them when and since they came home. Now, going on more than four decades after the fact, military historians and the public at large have the opportunity now to learn at least some of what those men and women went through. The former is providing this to the latter and deservedly so.

In 1967, the war was still ramping up for American military forces, certainly in the manpower department. The Tet offensive was in the future and the possibility of victory was still extant. However, American hands were tied by the ostensible neutrality of neighboring Cambodia. Government policy was to avoid fighting there, patrolling there, bombing there—any sort of military activity from across the Vietnamese border was forbidden.

As a result, the North Vietnamese Army (NVA) was able to maintain sanctuaries there for purposes of rest, recovery, reinforcement, planning, supply, and all manner of offensive military action with impunity. For the U.S. Army and Marines, taking the war to the enemy essentially meant conceding the initiative and waiting for said enemy to come to you from over the border.

Fighting a war of attrition went hand in hand with a pacification policy meant to provide peace and security to the South Vietnamese people. In the effort to do so, the intention was to prevent the NVA from attacking the lowlands and coastal areas by confronting it in the central highlands away from population centers. However, this also meant a change in topography and terrain: Fighting would occur in the mountains and jungles close to the border.

In the spring of 1967, elements of the 4th Infantry Division found themselves engaged with enemy forces in a series of conventional battles in the divisional operational area. Indeed, soldiers from its 1st Brigade fought very close to the Cambodian border over the course of nine days in the month of May.

Although at times outnumbered and in danger of being overrun in some instances, with the support of artillery and air strikes, helicopter resupply, and outstanding leadership in the combat area and the rear, these GIs were able to defeat their foes—although not without incurring significant casualties themselves.

This summary, however, does not begin to describe the detail of what is basically a ground-level, small unit, tactical story. It tells not just what happened to whom, how, and where but also the very personal stories of the men who made up the forces, which comprised the 4th Infantry Division elements involved.

The story of those men, the survivors and the dead, demonstrates the sacrifices and commitments they made, even as draftees and replacements who may not have wanted to be in-country in the first place. They exhibited what most should know about combat: It’s not about the big picture, victory, a policy, etc. but about the guy or guys next to you in the foxhole.

Be forewarned, this is very much a graphic story with descriptions of bodies on both sides torn apart and mangled and wounds specifically detailed. It is also tragedy on a personal level, including at least one man killed in action who had only a short time left in his tour before heading home and another who would never get to see the daughter born while he was serving.

Of course, such sacrifice could hardly fail to be recognized as medals and decorations were awarded, many posthumously, including three Medals of Honor. That should be truly indicative of the valor displayed.

This publication is not only well written, but also well researched as indicated by the bibliography. The photographic section largely consists of personal shots of many of the men mentioned in the text. The multiple maps are basic but informative for purposes of context.

Author Warren Wilkins has done a great service in writing about these battles and describing them for the edification of the public. The finished product is highly recommended to all as it is truly about time that our Vietnam veterans get their due. Whether or not they came home in glory, they at least deserve our respect for doing a dirty job as best they could.