The Nightmare Girl (Fiction Without Frontiers) 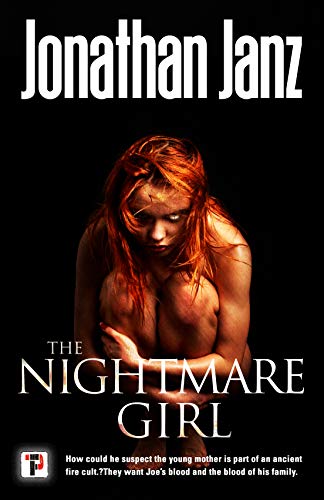 “With tinges of Rosemary’s Baby as well as a touches here and there of the Robin Hardy-directed film, The Wicker Man, this is a tense as well as intense tale of ancient religious fervor directed against someone accidentally coming between a cult and its end purpose.”

What happens when a man tries to do the right thing and it turns instead into a disaster?

Construction company owner Joe Crawford finds out when he attempts to stop a young woman from publicly beating her child while onlookers do nothing. Not only does the woman retaliate by attacking him but so does her mother.

“Both women fell on him, slammed him like an inrushing tide. Joe’s forehead cracked against the side of the van. There was a surge of shouting voices, the sense of a melée forming behind him.”

The altercation ceases only when parent and grandparent are arrested and the child, Stevie, is sent to a foster home, but it doesn’t end there.

Once Angie Waltz and her mother Sharon are released on bail, Joe finds himself stalked by Sharon, who physically threatens him, coming to his worksite, his home, demanding he change his testimony so they can get Stevie back. Joe refuses, deciding he can’t let what they did go unpunished. A few days later, Angie retaliates in a more horrific way, by dousing herself with gasoline and setting herself afire.

Though Police Chief Copeland assures him otherwise, Joe is conscience-stricken, asking himself if he shouldn’t have interfered, or perhaps could’ve done things differently. Surely there was some way things could’ve ended in a non-lethal manner.

“You listen, Joe,” Copeland said. “There was no other way things could’ve gone. You either let that little boy be beaten like everyone else did or you intervene. By my estimation you did the only sensible thing you could.”

His wife, Michelle, suggests they adopt Stevie. She and Joe want another chil,d and it would prevent Sharon from getting custody of the little boy. Joe doesn’t think that’s such a good idea, but the more he learns of Sharon Waltz and the more he thinks about it, perhaps it isn’t.

GuIlt still in evidence, he secretly goes to Angie’s funeral, where he learns the others mourners are part of a cult of some kind. They grieve Angie’s death, not for her own sake, but because of something she represents.

“The preacher, priest, or whatever he was, broke into English. “Those who would destroy the Chosen are everywhere, Brothers and Sisters. They conspired to bring down dear Angela and they succeeded.” He paused, surveying them slyly. “Or at least they believe they did. They’re out there. The conspirators. The ones who’ve taken dear Angela from us.”

Later when a couple planning to buy the house next door ask Joe to do a walk-through with the idea of doing the renovation, Joe recognizes them as members of the funeral party. He’s hesitant, but he needs the work, so agrees.

Soon Joe learns the threats made against him aren’t simply because Sharon lost her daughter. Angie Waltz was destined for an upcoming ritual performed by the cult. They no longer have Angie, so they’ve decided his own daughter will take her place.

With Chief Copeland’s help, Joe decides to confront the zealots at the farm where they live.

“Darrell and I have a plan but we’re outnumbered. With even with his officers, it’s at least thirty ghouls to five sane people.”

“Where do you get thirty?” Michelle asked.

“There were thirty or so at the funeral,” Joe said, “and I’m going to assume every one of them is a psychotic cult member.”

What happens doesn’t end the threat to Joe or his family. It merely intensifies it to the point where Joe, his wife, and his daughter are in even more danger, and it looks like no one’s getting out of this alive. The cult’s reach is longer than he believes, and people he wouldn’t expect are involved.

Sometimes it doesn’t pay to be any kind of good Samaritan, as Joe Crawford is finding out. Unfortunately, he’s also living to regret it.

With tinges of Rosemary’s Baby as well as a touches here and there of the Robin Hardy-directed film, The Wicker Man, this is a tense as well as intense tale of ancient religious fervor directed against someone accidentally coming between a cult and its end purpose. It’s a taut thriller of a contemporary man struggling to protect those he loves from the forces of primitive and eldritch beliefs.

All of Jonathan Janz’s novels are well-written chillers. Currently, this one tops the list.