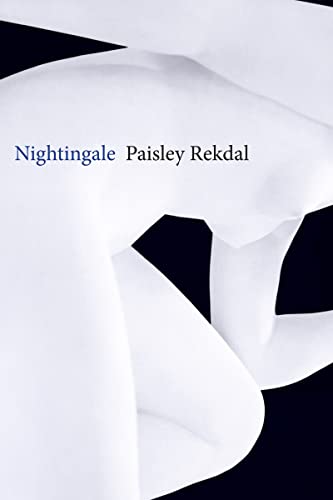 “He who learns must suffer. And even in our sleep pain that cannot forget falls drop by drop upon the heart, and in our own despair, against our will, comes wisdom to us by the awful grace of God.”  —Aeschylus

Does change require suffering? Is it ever nonviolent, or do the greatest, most profound changes in our lives require violence, either physical or spiritual? Nightingale, Paisley Rekdal’s fifth collection of poetry, seeks to answer these questions through poems and even an essay that explore what few writers since Ovid have reminded us: metamorphosis is a violent act, requiring dismemberment, silence, and fragmentation before we can become something new.

Early in section one, the poem “Psyche” launches the reader into Rekdal’s architecture of suffering:

“The photos of the boy were taken first

in play, but when one

bath of her son’s back stained

to pose him: the red scarf noosed

Characteristic of the best poems in the collection, the mythological reference is subtle. Rekdal trusts in her imagery to do the work, letting the mythology open the subterranean layers. “Psyche,” of course, refers to the human spirit or soul, but the myth of Psyche also tells the story of a beautiful woman who is told by Cupid that he can only be approached in total darkness.

One night, Psyche lights a lamp to see her lover, only to lose him forever. In Rekdal’s nimble hands, our Psyche is a mother and a photographer who thinks if she can only photograph her fears of what might happen to her son, they won’t come true. The desire to see is a desire to protect ourselves and those we love. But as Rekdal reminds us, can a parent ever really protect their child: “when light hit her son/ just right. Magic/ her son once said./ He does not call it magic now.”

We see another parent/child relationship in the poem “Tiresias,” where a mother learns to accept her daughter’s transformation into a male even while she must accept her own body’s cancer.

“And now, after her diagnosis, she wonders

why she never asked. To remove

the breasts entirely, cut out the slick

dark bag of womb, stitch out from fat

and labia some length of skin

she’d learn to call a penis—

before her child, the two of them

still the spitting image of each other: mirrors

to the last, broken and remade

in the same places.”

The effect is staggering as we feel the mother contemplate the violence needed to rid her own body of cancer even as she contemplates the violence in the form of surgery that might transform her daughter into a son. Again, the myth works below the surface powerfully resonating as the mother tries to see herself and her daughter anew. Like Tiresias she will need to see with better eyes.

Collections of poetry and poems centered on myths and mythology have been around for as long as there have been poems. One need think only of Eliot’s Wasteland or Robinson Jeffers’ “To Helen About Her Hair” or William Carlos Williams’ “Landscape With the Fall of Icarus.” Myths along with birds seem to be the two most common tropes of poetry, so if a poet engages in poems inspired by or in conversation with mythology, they better make them new. For the most part, Rekdal’s poems succeed because the myths are understated. It’s only when she lets the myths do the heavy lifting that the poems seem to falter. For ex. In the poem, “Gokstadt/Ganymede”:

“In myths, we call it love. Call it desire

to soften the god who finds a boy, leads him

far from home, claps a cup in his hand, and demands

Bend to my will, child, you’ll be adored—”

Here we see the direct reference spells out the poem’s argument a bit too clearly. In other lines, we are told too much, naming the emotion so that the reader feels nothing:

“Instead I find myself

nursing the belief your wounds kept you

from hurting me. What you sensed, what I hated:

some part of me loved you, not in spite of

but because you had been raped.”

Or the overly-indulgent and not particularly fresh description of making love:

burning beneath my palm, you the tree

bursting into flower, you the bird

finally taking wing. I wish I could have made

our bodies one only of delight, never of suffering.

I wish that ivy dress had come softly twining

to our feet as we grafted ourselves into one

another: my slow blush ripening between us as

something in us both, finally, opened.”

In poems like these, Rekdal’s tendency toward direct statement of emotion and choice of more stale imagery, “you the bird/ finally taking wing” chokes the resonant layering we feel in the stronger poems. Similarly, the decision to add the sixteen-page essay, “Nightingale: A Gloss,” in which Rekdal explicates the otherwise successful and nuanced poem “Philomela” as well as

Ovid’s version of the myth as it appears in Metamorphoses, and finally recounting in detail her own rape, created a tonal shift that not only jarred this reader out of the book but made him feel as if he’d been suddenly thrust back into an undergraduate class.

The effect is to have both Ovid and the poem defined in ways that felt prescriptive. “The rape isn’t described in my poem “Philomela”: it takes place offstage, recorded years after the event by the character who experienced it. I left out the rape, thinking to reject a reader’s voyeurism. But the reader of myths knows what is left out: my silence, then, is not a revision but an invitation to imagine, to remember, this violence for yourself.” But if the rape was left out of the poem as an “invitation to imagine” why are we then given it in the later explication?

Or later in the essay when she attempts to explain the mysterious ending of “Philomela,” an ending whose quiet ambiguity this reader found extraordinarily powerful: “In my poem . . . the woman who was raped inherits—years after her attack—an antique sewing machine from her grandmother. She imagines using this machine to sew a quilt on which she will embroider figures of the domestic life her grandmother ruefully noted she did not have: a house, a child, a man. But after a few minutes’ contemplation, she boxes up the machine, slides it high up on a bedroom shelf. What is she communicating?”

Then there is the troubling recounting of her own sexual assault. It is painful to read. It is indeed part of Rekdal’s point that the history of sexual violence has been one of silence. The book and this essay are in one sense a response to that history of silence. The poem “Philomela” itself made the reader feel the problematic nature of that silence more powerfully than the much longer essay, and that the tonal shift of that essay, while successful in drawing our attention to the problem, pushed the book toward bathos. Rekdal, herself, seems to acknowledge this. “Or was I, that day in the woods, made into a poet? . . . Perhaps it is sentimental to suggest violence has given me meaning.” It is not sentimental. It is, in fact, a shrewd and essential point. It is only that in the essay, that nail gets hit with a sledgehammer.

Thankfully, in the final sections of the collection, Rekdal not only returns to form but focuses her capacious intelligence and mastery of image on the ways in which nature illuminates our paradoxical humanity. Case in point, the collection’s final poem, “Pythagorean,” a tour-de-force meditation on the complex relationship between love and violence, and the ways in which we as humans seem doomed to forever confuse the two. The brilliance of the poem lies in the way in which Rekdal moves through each character’s point of view as two couples sit around a table at a dinner party.

“She imagines the other woman

there now in the field, softening

under her husband’s attention. She imagines her

taking his hand. She imagines her following him

into their host’s marble bathroom,

pressing against him by the onyx sink.

Now the two of them are alone

In one of the final images of the book, a flock of starlings dips and bends as a group. The couple at the dinner party are having marriage difficulties, their marriage dipping and bending like the birds. In Ovid, Pythagoras speaks of how all things are in state of flux, how change is the defining characteristic of life. Rekdal’s masterstroke is to point to the fact that no one told us the dark and wretched metamorphosis of our larval bodies would be easy. In the end, metamorphosis isn’t brought on by the gods, rather, it sneaks up on us by living, by growing old, by getting sick, by having children, by loving one another.