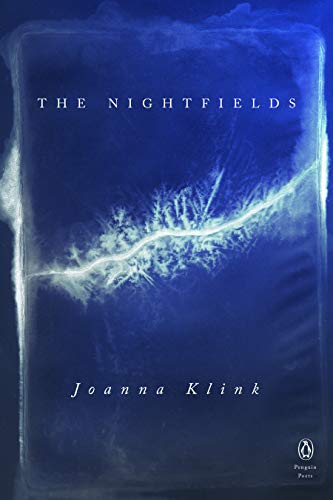 “Klink is a vatic poet, a seer not just of the body but of bodies in relationship to one another, bodies in relation to the natural world, to the universe both inner and outer. She is attuned to the contradictions inside us, our simultaneous need to connect and to destroy what we love, to both nourish and hurt ourselves and others.”

“People are going back and forth

where the two worlds touch.

The door is round and open.

Don’t go back to sleep.”

at my feet. I choose

this friend to love, the deep

The narrator models for us what it means to move through the world “with my whole life” as Rilke said and not hide from it. In doing so, Klink establishes herself as a guide through both the endless “small gestures” of living and the weight of the infinite that weaves through everyday life, and in doing so, to lead her readers to an understanding of the ways in which living fully, feeling fully is an heroic act.

“All the days you have

ever breathed are swallows

When the wind pushes

branches in and out of

shade it is an opening,

as every small gesture

toward another person is

The hope of connection with the infinite, with the natural world, with each other, with ourselves is at the heart of nearly every poem. In each, Klink reminds us that it is through opening that we live and that it is in this struggle to open that we are most “wholly alive.” The struggle is not easy:

in the room where we sit, or I am blind to clocks…”

As guide, Klink is more akin to Dante’s Virgil, in that the terrain she has staked out is the spiritual—the individual’s relationship with the infinite. She reminds us we are not alone in our struggle to open. The infinite in all its manifest forms is present on nearly every page, from the opening poem, “. . . slow stars precisely set in depths so vast” to lights strung up on the wood ceiling of a bar that “mimic the lift of/ stars.” We feel our connection to a vastness that might otherwise feel alienating. It is Klink’s genius that she bridges the gap between the infinite and the low with such grace:

are brushing the lamps and stars

have slipped in their dome

Here we see not only the ways in which the immensity of the universe is made small but also stars as counterpoint to the inchoate shifting of self we all feel as we move uncertainly through the world, “It is hard to shape/ oneself to oneself.”

As the great Japanese filmmaker, Akira Kurosawa said, “To be an artist means never having to avert your eyes,” and in the lyric precision of Klink’s lines we are forced not only to look outward but inward as well:

“If you knew just what you were given, would the ache

break out of it. Would it help you. Would you open.”

Klink is a vatic poet, a seer not just of the body but of bodies in relationship to one another, bodies in relation to the natural world, to the universe both inner and outer. She is attuned to the contradictions inside us, our simultaneous need to connect and to destroy what we love, to both nourish and hurt ourselves and others.

“Why would you root into yourself

when the rain could, any moment, coax light into color.”

“We throw away things of great value and feel confused.

Seize upon the smallest arguments and call them huge.

(Some days I am small beyond measure.

Some days I am the fence the field the trees.)”

Given that we are a pile of contradictions and confusion, she urges us to forgive ourselves and each other:

On the man at the corner who just asked for money,

he is probably hungry, and what would he do

if he were given a boat, a breeze, and what would he

usher into himself if he thought life would help him.”

Her recurrent question to each of us seems to be, “What will you admit/ into your life?” And what are the consequences of opening, of moving between worlds from one’s self to another, one body to another, especially when, “We hardly know/ who we are but we go on/ living.”

She is also our guide to traveling between the worlds of the living and the dead—those who were once present in our lives but for one reason or another are no longer. She is, in this sense, our poet of loss, of how to go on opening in the face of one goodbye after another. In this, her exquisite attention to sound echoes throughout each poem, reminding us of the echoes of loss in our own lives:

of a town I only know

I have to leave.

I am without goals or

plans. In the morning

I latch my hands

In poem after poem, Klink charts for us the loneliness of time passing and the inevitable loss that comes with it.

“Once again I am unable to withstand

the brevity of hours, the weekend almost gone,

stay close to what you love

but step back from those whose need

Perhaps more than any other poet writing today, Joanna Klink is the Romantic poet of our age, and like the great romantic poets, Wordsworth, Keats, Shelley, the narrator of The Nightfields is often walking through her poems, attuned to the silences and quiet murmurings of the world:

“I crossed the streets at five,

past the park, the wind knocking at swings.

Or I was unable to pass by—

children at the slides, a few dogs flying at sticks,

the murmur of a peace that is

constant in this world and impossible to keep.”

The reader is reminded of the narrator in Frost’s “Stopping by Woods on a Snowy Evening” and the impossible dilemma of being human presented in such simple terms: “The woods are lovely, dark, and deep/ but I have promises to keep, and miles to go before I sleep.” We are, all of us, caught every day between the need to open to the divine, to the infinite, and the myriad of fears, promises, and obligations, that keep us tethered to our own limited worlds.

Yet Klink always manages to be stretching the boundaries of her own world. Her peripatetic poems mirror the moving between worlds that happens in her many lyric leaps, “As one thing is entrance unto another/ the dark moon becomes new.” In following her, we cross the boundaries of self and so become new, for Klink’s subject in The Nightfields, and indeed in her entire oeuvre seems to be nothing less than the full giving of our lives to lifting the veil between worlds, between each other, and crossing over. In serving as our guide, she offers up her own life as example, :

“When I move toward you

it is with everything I have lived,

whose bodies thread at evening

into the deepening grass.”

And in doing so, she allows for the complexity of mystery, both the mystery of the universe and that of being fully human:

what is unbearable in me

from what is opening.”

Only the worthiest guides, the truest seers, have the courage and honesty to tell us that the lightness of opening is bound up with the heaviness of the world. To open means to carry with us what is unbearable, or, as Viktor Frankl once said, “What is to give light, must endure burning.” It is the paradox of the seer, that the truest ones admit their limitations as well as ours.

The final third of the book is entitled “Night Sky” and is made up of small lyric poems ranging from four to fifteen lines each. The cumulative effect of these poems is difficult to state, the way in which they capture the paradox of being human, the need to open even through the pain of living, the fact that there is no map, no “right” way of doing anything, the choices we make each day to open or close to that pain, to accept or reject it and the beauty or “unbearable” weight that goes with it. Pick almost any poem in the sequence, though, and it provides a fitting example for the way in which the myriad themes of the work form a constellation by the end:

“There is no almanac for the living—a pulse flies

and then stops. You are pain pinned to muscle—

You are dark arteries of quiet, the white heat

smashed through deserts and levers and coasts—

that flickering pause between thoughts. More even

than your own life, you flow from what is.

The stars swept into stillness, the ground drinking

rain. You are the whole shape of sound.

Whether or not you sing.”

We end as we began—with a choice whether or not to sing. The poet as guide has been a part of our poetic landscape since long before Dante’s Virgil. Each age requires its own, and in her body of work, but especially in The Nightfields, Joanna Klink has proven herself to be one of our best, willing to guide us through loss and the ways in which we must push to open, willing to speak the difficult truth that while desire may be bound to human experience, we don’t have to be bound by desire—“To want a simple life/ might mean/ to have given up/ on expectation,” willing to remind us that the boundaries between worlds and between each other are meant to be bridged, including that undiscovered country, the most feared of all boundaries. “Even as you die you will not cease to dream.”