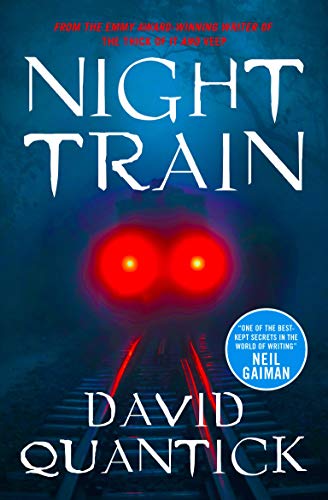 “Quantic holds the pacing taut and sustains the tension for 270 pages before finally revealing the truth. Meanwhile, his characters’ sarcastic deadpan helps.”

A woman wakes up in the dark on the floor of a train in what seems to be an empty room. “If this is a room it’s got a door,” she tells herself. “Every room has a door,” she says as she crawls blindly along the floor. Eventually she does find a door. And then in the next carriage she comes upon 15 dead people, neatly dressed and slumped in their seats.

It gets better from there, but more startling than unexplained corpses are the questions that swirl in her head: Who is she? How did she get here? And here is the train headed?

In these pages David Quantick, an Emmy Award-winning television writer, gives us a modern horror novel. His protagonist, a woman named Garland, eventually comes upon another passenger named Banks, and then a third, a young girl named Poppy. But nothing is as it seems.

The bulk of the book gives itself to narrative accounts as they struggle forward toward the front of the train and its driver who can presumably provide them with answers. All the while they fight off formidable, potentially fatal obstacles.

Quantic holds the pacing taut and sustains the tension for 270 pages before finally revealing the truth. Meanwhile his characters’ sarcastic, deadpan helps break that tension. In places it made this reader chuckle out loud. As The Independent said of Quantic’s writing, “it unfolds like The Da Vinci Code, only with a sense of humor and better grammar.”

But back to our characters. “The idea of the game isn’t to win,” says Garland. “It’s to lose?” asks another. “No, you just have to keep moving.” Likewise, the reader must move along in this captivating yet hilarious book.