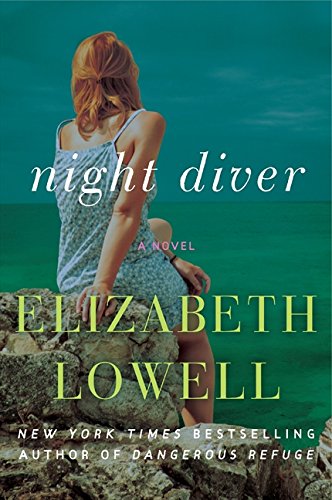 “Author Lowell keeps the tension building from the start, accumulating information and supposition into a lovely layer cake of mystery. The resolution, when it comes, is believable but not telegraphed too early. It’s well-done popular mystery.”

Fifteen years ago following an unspeakable tragedy, Kate Donnelly left St. Vincent and the family business forever. Now she’s answering her brother’s impassioned plea that she return and help him save their deep sea salvage business.

Faced with the fact that he has signed a terrible contract with the British government, coupled with the possibility that someone is stealing salvage, Kate needs to decide how deep she’s willing to go and how much of her past she is willing to face.

It doesn’t help that the operation has a new overseer, Holden Cameron. Himself a military diver with years of experience, he’s convinced that her brother and grandfather are hiding valuable goods and trying to bilk his nation.

It also doesn’t hurt that both characters are blindingly gorgeous (as repeatedly noted in the text). Holden is immediately hypnotized by Kate’s hips; she feels the same about his “dragon eyes.”

The mystery fares very well. Lowell sketches the ins and outs of the underwater salvage business quickly and clearly, and then settles into creating a series of red herrings and straw men that might or might not be stealing goods the British government covets. Are the thieves the Donnellys? Kate’s brother and grandpa have the know-how and the motive. The contract they’ve signed is about to be broken and with it their business. Could it be their rag-tag crew of underpaid divers? How about a middleman? Is there actually anything to steal in the wreck of the Golden Bough?

Author Lowell keeps the tension building from the start, accumulating information and supposition into a lovely layer cake of mystery. The resolution, when it comes, is believable but not telegraphed too early. It’s well-done popular mystery.

The romantic aspect doesn’t fare as well. From the immediate, overwhelming attraction of the leads, to their impossible beauty, to the way both supposed professionals hop nearly immediately into silly sex, this relationship doesn’t have a second that feels real or true. These are not kids, who might be presumed to mistake lust for love.

Kate’s nightmares about her parents’ deaths are milked for all they’re worth (and leave one wondering why she isn’t under a psychiatrist’s care if they’re still so vivid) for their ability to drive her into the intrepid hero’s arms and bed—utterly unconvincing and completely phony.

Taken as a whole, Night Diver is a fairly entertaining mystery with an unfortunate romance appended. Lowell’s ability as a writer is undoubted, though, and keeps her story chugging along despite the dead weight. Read it for the mystery, and ignore the “dragon eyes.”