Night of the Assassins: The Untold Story of Hitler's Plot to Kill FDR, Churchill, and Stalin 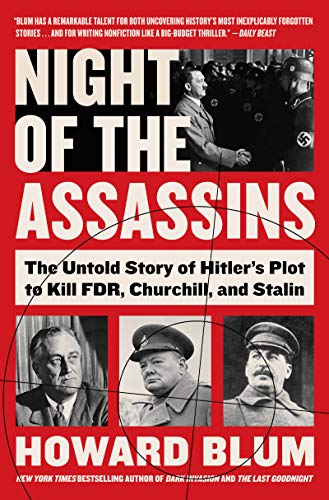 “Ian Fleming himself could not have written such an improbable yet actual plot . . .”

One of the reasons World War II continues to generate dozens of published volumes annually more than 75 years after its conclusion is that there are still so many unplumbed stories that are just now emerging from national archives. This book is one of those, reading like fiction by Ken Follett or Robert Ludlum, yet a true account of one of those strange moments in World War II that truly could have changed history.

Howard Blum tells the amazing tale of Operation Long Jump, the Nazi plot to assassinate the Big Three leaders at the Tehran conference in November 1943.  Using Russian archival sources only made public in the last 20 years along with a huge collection of other primary and secondary sources, he weaves a fast-paced story of how Nazi intelligence services and special commando units tried to infiltrate an assassination team into Iran.

While this may seem like far-fetched fantasy to many readers, Blum weaves together the determination of the leaders of Germany’s intelligence organizations along with the intelligence analysis and sheer lucky happenstance that allowed the Nazis to not only develop a credible operational plan, but assign it to the “Most Dangerous Man in Europe,” SS Major Otto Skorzeny, Hitler’s favorite commando who led the operation to free Benito Mussolini from his mountain top imprisonment by a daring glider attack.

On the other side of the narrative is U.S. Secret Service Agent Mike Reilly, the head for Franklin Roosevelt’s Secret Service detail, charged with keeping alive a headstrong wartime wheelchair bound commander-in-chief. Agent Reilly is particularly challenged with keeping Roosevelt alive while making numerous covert trips to the three major overseas Allied strategic conferences in 1943, all of which involve extensive air travel in a large and defenseless transport aircraft.

As Blum unfolds a narrative filled with eclectic characters, the reader follows a classic spy/counterspy story as the Nazis try to discern the time and location of the first meeting between Roosevelt, Churchill, and Stalin, rumored to be occurring in late 1943, and then when the location and time is confirmed, prepare a network of agents in Tehran to support a possible strike by a commando team.

Meanwhile, the various Allied intelligence agencies try to keep the Germans in the dark about the details of the conference while sniffing out any potential threat to the crucial meeting of the three leaders. Agent Reilly is particularly concerned not only with the nest of secret agents and posers in Tehran, but how to work with his Soviet counterparts to ensure the safety of the three leaders.

The fact that Iran was under de facto occupation by the Americans and Russians was a big factor in their plans to secure the meeting. Iran became a major transshipment route for American Lend-Lease aid to the Soviets, and thousands of American, British, and Russian troops controlled the major cities and ports, particularly Tehran. Blum shows the ruthless nature of the Soviet precautions as Soviet intelligence and secret police agents of the NKVD, the forerunner of the infamous KGB, began a massive sweep of Tehran to arrest any German national or potential sympathizer when the first hint of a conspiracy is heard.

In spite of these actions and the extensive security precautions undertaken by the protective details for all three leaders, the Germans come far closer to pulling off what becomes a virtual suicide mission than was generally believed. Although there has been historical controversy that Operation Long Jump was just a Soviet disinformation campaign to persuade Roosevelt and the American delegation to stay in the Soviet Embassy compound so they could be put under NKVD surveillance, Blum weighs that opinion against the mountain of supporting evidence and while acknowledging that the Soviets no doubt took advantage of the situation, he convincingly shows the Nazi threat was real and nearly came to fruition. Except for the typical challenges of managing foreign intelligence assets- greed, stupidity, or sheer bad luck, the Nazis might have gotten their group of assassins within lethal proximity of the Big Three and completed the greatest special operations mission of the war.

Ian Fleming himself could not have written such an improbable yet actual plot. The moves and counter-moves in this tight and engaging story show that World War II was fought just as much in shadowy back alleys as on the battlefield.