The Nickel Boys: A Novel 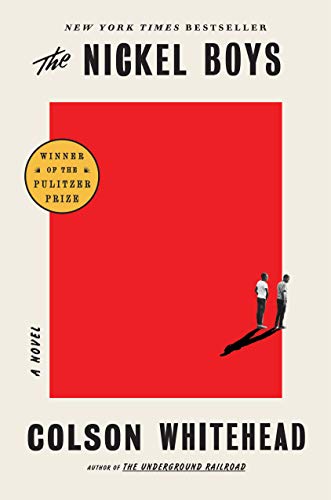 Inspired by the true story of the Dozier School for Boys in Florida, Colson Whitehead’s novel The Nickel Boys depicts the Nickel Academy, a reform school in which boys are abused, worked almost as slaves, and deprived of an education. But don’t be put off by the disturbing subject matter of The Nickel Boys. Although Whitehead creates a tale about the cruelties and gross injustices endured by the boys, especially the African American boys at the Nickel Academy, his story is utterly engrossing, funny, at times, suspenseful, flawlessly constructed, moving, and absolutely brilliant.

The Nickel Boys centers around two friends, Elwood and Turner, who meet at the institution in the mid 1960s. Elwood is a good boy, a model citizen who lives with his overprotective grandmother Harriet in Tallahassee. He admires Martin Luther King, Jr., reads, works hard, believes in truth and justice, is honest and principled, and aspires to attend college.

Despite being unfairly accused and convicted of the 1960s southern equivalent of “driving while black” or being with someone who is, and getting sentenced to time at Nickel, Elwood remains optimistic.

Shortly after arriving at Nickel, Elwood reflects on Dr. King’s speech to students about the humiliations of Jim Crow and the necessity to turn these debasements into action: “It will enrich your spirit as nothing else can. It will give you that rare sense of nobility that can only spring from love and selflessly helping your fellow man. Make a career of humanity. Make it a central part of your life.” After musing over MLK’s words, Elwood thinks to himself, “I am stuck here, but I’ll make the best of it.”

Turner, while more worldly, street-smart, and cynical than Elwood, befriends him at Nickel and does his best to protect Elwood by warning him about the goings on in the reform school and recruiting him for one of the more tolerable work duties off campus.

Most of the boys, particularly the black boys, endure brutal, inhumane treatment. Elwood is beaten severely for trying to stop a bully. Other kids are beaten to death, sexually assaulted, given inadequate food, overworked, and all are denied a legitimate education. Although The Nickel Boys clearly relates the horrors that proliferate at Nickel Academy, the narrative is not that graphic; it is never prurient or cringe-inducing, and yet it exposes, can be shocking, suspenseful, and is completely riveting.

The narrator’s wry tone and direct, crisp prose, much like that of Whitehead’s previous novel The Underground Railroad, perfectly balance entertainment and fabulous storytelling with critique and a pointed indictment of racism, and the justice and education systems in America. The prologue opens with the wry comment: “Even in death the boys were trouble.” This statement is followed by an explanation of how skeletal remains were discovered in a field, once a part of the former Nickel Academy, by developers who wish to turn the land in to an office park and plaza.

In a later chapter the narrator lists ways in which one could leave Nickel Academy, as though he is providing the contents of an instructional manual.  This includes: “Serve your time,” “aging out,” “The court might intervene,” “You could die,” “You could run.” The blunt list and the dry ironic tone are compelling and effective in conveying the outrages of Nickel.

The Nickel Boys is a complex, multi-layered work. It is a suspenseful page-turner and a great story, but it also examines profound questions about social justice, race, and friendship. While it is not a sequel or a true companion piece to The Underground Railroad, like its predecessor, The Nickel Boys too is an important novel about institutionalized racism and injustice in the United States.

The novel concludes with an amazing plot twist that leaves the reader stunned. Colson Whitehead set a high bar with his superb, well-deserved Pulitzer Prize winning novel The Underground Railroad. The exceptional The Nickel Boys is in the same league.