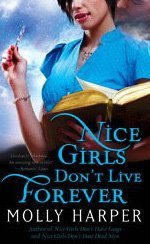 Molly Harper has returned with her third installment in the Nice Girls series with Nice Girls Don’t Live Forever. Once again she has managed to delight fans with a fast-paced plot and a heroine with neverending sarcastic humor and a bit of spunk for every occasion.

In this installment, former children’s librarian turned vampire bookseller Jane Jameson is once again trying not to be killed—which can be tricky when you are already a member of the undead. After what she believes to be a break-up with her irresistible vampire sire boyfriend Gabriel, Jane is looking for time to heal from her broken heart. She is surrounded by her closest friends: a pregnant werewolf, a shady 150-year-old vampire, and her dead Aunt Jettie.

Jane sets her goals for her new life and tries her hardest to keep going through each night as if her heart were not broken into a million tiny non-beating pieces. Dreams of Gabriel and the sinister presence of another haunt her. Liquor, girly movie marathons, and the occasional bar fight help with the pain, but many questions remain unanswered. Are she and Gabriel over forever? Will she ever find a man with whom she can truly share the rest of her immortal life? And who is trying to kill her once again?

Secretive communications from the woman whom she believes to be Gabriel’s lover soon fill in the gaps, and Jane realizes that her non-life might once again be in real danger. Who would think the undead would always have to fear being dead? Added to the suspense is her dreaded high-school reunion, at which she is to be part of the “in memory” wall, the upcoming arrival of her best friend’s werewolf babies, and a jaunt into the pink world of the Half Moon Holllow Chamber of “Courtney” Commerce.

With a wonderful cast of characters and a winning heroine, Nice Girls Don’t Live Forever is not to be missed—much like its predecessors. It’s a guilty pleasure that will have you wrapped up and unable to walk away from the undead life of Jane Jameson. Charming, with a healthy dose of Southern magic, Nice Girls Don’t Live Forever is one to be read and enjoyed with a nice glass of sweet tea or a bottle of O negative . . . your choice.