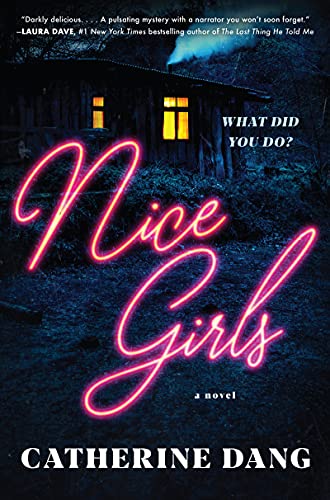 “Nice Girls is a thoroughly gripping novel from a debut author.”

Mary was constantly bullied while growing up in Liberty Lake, Minnesota. Being overweight and an A student caused her to bear the brunt of cruel comments from her peers. The last to be picked for anything, her only friend was Madison Nguyen, a Vietnamese girl also considered an outcast. Mary studied hard to make good grades, for she dreamed of getting away from her hometown. Her life started going downhill when her beloved mother died young, and as an only child, her father more or less withdrew away from her.

Mary's dream came true when she got accepted to Cornell University, miles away from home. She breaks her old habits, is friendly to everyone, loses weight, and now as a senior, she is an RA (resident advisor) in her dorm.

As the new freshman arrives, one of the students she mentors, Carly, strikes up a friendship with Mary. She is happy, for she never really had anyone want to be her friend, except Olivia, who dumped her after grammar school and then, Madison in high school. They spend time together until Mary gets expelled. Offering no excuse, her father picks her up to return home with her tail tucked between her knees. Her life and prospects are now over.

Back home, Mary faces the facts—she needs a job to cover her student loans. Living with her father is not what she wants, but where else can she go, and what kind of employment can she gain? She is hired at the local market, and for minimum wage, she sees her education wasted and has no friends. Madison resides in California, and her dad barely speaks to her. Could her life be any worse?

Mary is shocked to learn Dwayne Turner, the star football player from her high school class, is the assistant manager. Calling her "Ivy League Mary," which embarrasses her, she wonders why he is not in college, for he too had a promising future ahead of him. Though they chat, he is reticent about his past.

When he invites her to attend his cousin's birthday party, she is happy to go having nothing else to do. Yet when they arrive (at the seedy part of town), they witness Dwayne's cousin Jayden punch a guy till he’s unconscious. Deciding to take off before the cops show up, Mary, Dwayne, Jayden, and his girlfriend Charice hop into Mary's car and head for Dwayne's apartment, surprised to see he lives in a luxury complex. How can he afford to live here on a grocery store paycheck? Even though it's a studio, it still is an expensive residence.

Olivia Willand, Mary's childhood best friend, goes missing. She is well-liked, with a popular Instagram account, and is home for a visit. Mary carries a great deal of angst, especially after learning 19-year-old DeMaria Jackson disappeared not long ago. When walking along the lake with Dwayne, a couple stumble upon a body part, later identified as one of DeMaria's arms. Where is the rest of her body, and who killed her?

A widespread search commences for Olivia. Mary gets involved though hesitant, but her gut tells her DeMaria and Olivia's disappearance are connected. Passing herself off as a journalist, she interviews DeMaria's mom Leticia. She is unsettled seeing her holding DeMaria's infant son, whom she now cares for. Leticia is angry at the police, stating more effort had been spent looking for Olivia. Still, no one seemed to care about DeMaria, alleging it was due to her being black and not from a well-to-do family.

Mary does not tell anyone why she got expelled, leaving the reader to wonder what happened. After being home a short time, Mary digs more into the two missing women, she receives a text, and it shows her police report from school, and it not only went to her and her job too.

When she arrives at work, Jim, her boss, confronts her:

"After I opened the checkout lane, Jim came by. I could hear it in the way he walked, each step halting for a slight second too long.

"I tried to smile so hard that my cheeks hurt.

"'You have a criminal record?' he asked.

"Jim was frowning, his arms folded across his chest. He was wary, as if he were looking at a bomb instead of a person.

"'So it's true?' Jim asked. 'The fourth-degree assault charge?"

"'You lied, Mary. On the paperwork, you said you had no criminal record.' Jim didn't blink. 'And you're got a whole article. That's something you should've told us.'

"I was watching myself slip away, my hands slackening off the rope, gravity tugging me down. There was no stopping it. . . .

. . . "People were fired every day. They were let go because of budget issues or a lack of skills. Sometimes the boss was in a bad mood. Other times they deserved it.

"But I wasn't like them. I was boring and smart, and I had busted my ass off to get into Cornell. I was nice. I wasn't someone who got fired."

Things turn depressing for Mary. Her father is disappointed in her. With no employment, no friends, things keep going downhill.

When parts of Olivia's body are discovered, Mary becomes more concerned about a serial killer in town. Both women's deaths are connected. But who will believe her?

One cannot help but pity Mary for all the pain she faces during her life, and a hoped-for future that goes down the drain. But between the many subplots and backstories included, this tale is complex, with a lot of fodder to whet a mystery lover's appetite. There are so many suspects, it’s challenging to discern who the perpetrator is in these crimes. In addition, the ending is unexpected. Nice Girls is a thoroughly gripping novel from a debut author. Will there be a sequel?