Next in Line: A Novel (William Warwick Novels) 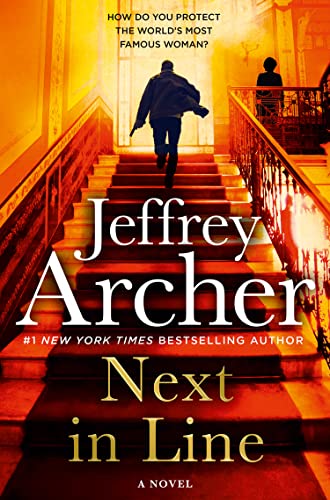 “Next in Line will be a happy choice for consumers of fast-paced action, who expect the author to demonstrate wide-ranging expertise in politics, the military and police, governments, history, finance, international locations—and, in this case—the practices of art collectors.”

“How do you protect the world’s most famous woman?” The question appears as a teaser for Jeffrey Archer’s newest suspense novel and refers to Princess Diana. The year is 1988, London. Detective Chief Inspector William Warwick is seconded to the Royalty Protection Command—a group responsible for the security of the royal family—and is joined by Detective Inspector Ross Hogan. Next in Line is the fifth title in the William Warwick series.

The plot has three intertwining branches.

First: as the novel opens, Warwick and Hogan have illegally extradited a notorious criminal, Miles Faulkner, from Spain to England, where he awaits trial in Prison Belmarsh (a place the author knows well having served a partial sentence there in 2001 for perjury and perverting the course of justice). Meanwhile, Faulkner’s legal representative, Booth Watson, is attempting to steal his client’s money and extensive art collection and to ensure that Faulkner receives a lengthy prison sentence so Watson has ample opportunity to complete his elaborate thefts. At the same time, Faulkner’s ex-wife, Christina, is scheming to seize his valuable paintings and his millions. She is also a friend of Warwick’s wife Beth, who is an art specialist at the Fitzmolean Museum; however, Beth has serious concerns about trusting Christina.

Second: The UK’s intelligence service, MI6, believes Milner, who is in charge of the Royalty Protection Command, is crooked, with other members of his team abetting him. Warwick and Hogan are assigned to root out the corruption but also to protect Princess Diana, with Hogan assigned to her personal detail and that of her lady-in-waiting, a woman Hogan finds attractive.

Third: A Libyan terrorist—unknown to the authorities—is imprisoned in Belmarsh, and when Faulkner learns about him, he warns Warwick of a major attack in London and possibly one on the royal family. This third strand drives the action into a frantic crescendo, with a cinematic ending.

For some, inserting Princess Diana into a novel may come across as a gimmick to intrigue readers, but Archer was acquainted with her when he assisted the princess with charity auctions. As a member of the House of Lords, he is also able to write from legitimate governmental experience, including about Prime Minister Margaret Thatcher, who makes a few cameo appearances.

Without revealing the ending, Princess Diana becomes involved with a wealthy man from Dubai, Jamil Chalabi. He bears a disconcerting resemblance to Diana’s lover, Dodi Fayed. This linkage is strengthened because the paparazzi take pictures of the princess and Chalabi on his yacht, as actually occurred with Fayed. Is this an intentional or subconscious association? And speaking about photographers, in one implausible scene, a paparazzo is able to take clear photographs from a distance of 458 yards despite it being a dark night, with a large stretch of water between.

During the time before and after Archer’s first big work, Kane and Abel (1979), suspense novelists typically relegated women to paper-doll roles as damsels in distress and sexual/romantic partners. To the author’s credit, Archer has fashioned a cast of female characters who are significant players, thus trending away from the traditional male-dominant formula.

However, in order to round out Warwick and Hogan’s family life and more tightly ensconce Beth into the story, three children have been included, one of whom, Artemisia, constantly asks questions and is always demanding ice cream. The reader may wish her too-cute presence had been curtailed and feel that the appearance of the three tends to slightly sidetrack the narrative.

Next in Line will be a happy choice for consumers of fast-paced action, who expect the author to demonstrate wide-ranging expertise in politics, the military and police, governments, history, finance, international locations—and, in this case—the practices of art collectors. Readers will undoubtedly sit back, secure in the knowledge that they are in experienced hands, and enjoy this book, a worthy addition to Archer’s bestselling titles.