The Next Gulf: London, Washington and Oil Conflict in Nigeria 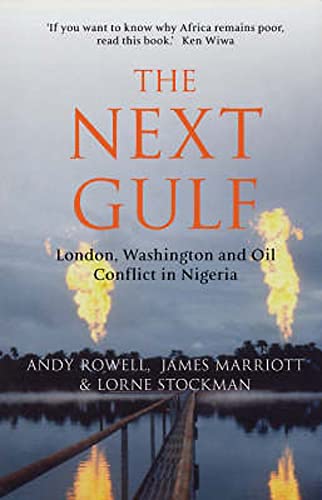 “What’s needed, in fact, is much more pressure from outside Nigeria combined with the work of really active NGOs. We don’t actually have to tolerate the corruption in Lagos, and we can get our oil just the same from a properly governed society. Definitely time something was done about it.”

One of the most trying aspects of writing about Africa is that the rhetoric for every faction has become too inflated. It has gotten to a point that one cannot trust the information from any given faction.

Platform London, for example, has become one of the principal critics of the oil companies and their questionable behavior in Africa. Its publications, which include the book listed above published above in 2005, and which must be read in combination with their most recent paper “Counting the Cost: Corporations and Human Rights Abuses in the Niger Delta,” do a reliable job of documenting how oil extraction ruined the environment of this part of Nigeria.

Royal Dutch Shell must certainly take the responsibility of for this destruction. There are also clear indications that the company supported Nigerian government human rights abuses.

There is no way to deny those assertions given the very solid case that Platform London has made. According to the UN Environment Program, restoring Ogoniland, which is just a part of the regions, could require the biggest clean-up operation in world history, dwarfing BP’s response to Deepwater Horizon, and could take up to three decades to complete. Chevron and Shell both “enabled” the Nigerian government when it sent in police and troops to control increasing protest in the region. The Nigerian government then killed, burned, and pillaged in a futile effort to regain control.

The problem is that neither Royal Dutch Shell, nor Chevron, nor any of the oil companies are responsible for the corrupt Nigerian government, nor for the very sad history of a country that has been suffering from the beginning of the colonization of Africa. Royal Dutch Shell is not responsible for the poverty and neglect that almost the entire population of Nigeria has suffered—and still suffers.

Much of that suffering is the fault of past British governments, which supported a corrupt Nigeria, and of past U.S. governments, which were only concerned with exporting as much oil as possible. Certainly, Shell had close links with the two governments as well, but, again, that does not make the governments nor the company responsible for all the abuses in Nigeria.

Platform London actually weakens its case with excessive and operatic drama, where it should have stuck to the facts that are damning enough. The book starts with an account of the execution of Ken Saro-Wiwa, a writer who was one of the first to call attention to the plight of the population in the Delta. He is an admirable character, and his execution was almost certainly unjust, but he wasn’t executed by Shell nor by the U.K. nor by the U.S.

The Next Gulf: London, Washington and Oil Conflict in Nigeria is constantly stretching to build a conspiracy theory: our oil need (an evil thing according to today’s environmental concerns today) provoked evil in the oil industry and those around it. That’s total nonsense. It ruins the book and wastes the reader’s time.

So The Next Gulf devotes considerable space to the history of the African slave trade, which undeniably was dominated by Brits and Americans. This has nothing to do with the modern oil industry. There is further narrative about the start-up of oil exploration in Africa, equally full of abuses and equally far off in the distant past.

Later in the book, there is a long account of Shell’s tribulations when the company faked its reserves calculations. Again, these have nothing to do with the issues at hand.

Finally, we come to the 1990s, and here, we begin to get some hard information. While 45% of the country’s oil wealth goes to the ruling oligarchy and Western oil companies, a UNDP report states that there have been a total of 6,817 oil spills between 1976 and 2001, which account for a loss of three million barrels of oil, of which more than 70% was not recovered. Most of these spills occurred off-shore (69%), a quarter was in swamps and 6% spilled on land.

In the Delta, most of the water supply is contaminated to an unacceptable level. More gas was flared in Nigeria than anywhere else in the world—in western Europe 99% of associated gas is used or reinjected into the ground. But in Nigeria, despite regulations introduced more than 40 years ago to outlaw the practice, most associated gas was flared, causing local air pollution.

Despite the environmental damage, not one red cent of oil profits were used to develop the local economy in the Delta. In fact, the main economic activity of farming suffered from pollution. The oil firms gave no jobs to the local population. They invested nothing in local development.

And when the local population came out in protest, they provided boats to bring in the thugs employed as soldiers by the Nigerian government. The Delta population responded by taking to arms itself, and by sabotaging a good deal of oil production.

Are we responsible for the abuses committed in Guantanamo? Guantanamo was former Vice President Cheney’s idea, and though it is shameful that our government allowed it to happen, you cannot blame the American people for it. Many of us tried to stop it.

How does Shell reply to all this? In a paper published in 2000, entitled, “Where Do We Stand?,” Shell talked about its business and specifically about that in Nigeria. The company had, at this point, paid Nigeria about $6 million in fines for gas flaring. “The Shell Petroleum Development Company of Nigeria (SPDC), the Shell company in Nigeria, intends to play its part in helping the government make Nigeria a better place for its people. In February 1999, SPDC announced a $ 8.5 billion series of interrelated projects to increase Nigeria’s oil and gas production significantly, while meeting the company’s commitment to end all unnecessary gas flaring by 2008.” Shell called the Niger Delta population’s grievances “legitimate,” and said it would participate in a community development program.

The book documents that these so-called “community development projects” didn’t work out very well, and that the cleanup efforts were halfhearted. The Delta isn’t in much better shape today than it was then.

All of this is fairly reported and Shell and Chevron need to do something about it, still. But then there is the inflated rhetoric. “The past decade in the Delta has brought brutal government crackdowns, the rise of armed groups and a multiplicity of intense conflicts.

While primary responsibility for human rights violations falls on the Nigerian government and other perpetrators, Shell has played an active role in fueling conflict and violence in a variety of forms,” the latest report from Platform London claims.

This is an unfair and overly simplistic potshot. Nigeria ranked 134 out of 178 on the Transparency International scale of corruption in governments. What are companies who operate in that environment supposed to do? One might argue that they could simply pull out, but we need the oil, regardless of consequences. Shell and Chevron can’t create a separate federal government in the Niger Delta. They are obliged to work with what they find.

What’s needed, in fact, is much more pressure from outside Nigeria combined with the work of really active NGOs. We don’t actually have to tolerate the corruption in Lagos, and we can get our oil just the same from a properly governed society. Definitely time something was done about it.