The News from the End of the World 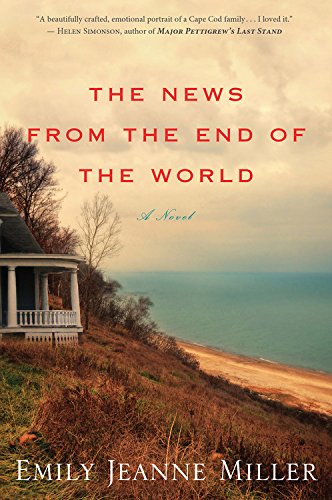 Everyone has skeletons in their closets and deals with problems at one time or another.

Such is the case with Emily Jeanne Miller’s novel, The News from the End of the World. Cape Cod is the setting and where twins Vance and Craig Lake grew up. Now in their forties, Vance lives in DC with a girlfriend and finds his life unraveling. His relationship is over, and he heads to Craig’s home to crash with him.

Craig is the father to 17-year-old Amanda, the child of his first wife who died in a freakish accident. Not long after her death, he met and married Gina who gave birth to infant, Cameron, and seven-year-old Helen.

Gina is unhappy with her life, feeling something is missing, and Craig, owner of a construction company, is anxious about their financial situation after going beyond his means to renovate their historic house.

Vance arrives unexpectedly adding to the tension within the family dynamic. He adores his brother’s children, though the precocious Helen tends to get on his nerves with her constant jabber.

Amanda proves to be another story. Vance has always been close to her, and he is surprised to find her home for she is supposed to be in Chile with a group of other kids disciplined for offenses they committed at school. Amanda was caught smoking a joint, and because she is an A student and close to graduation, she was able to get into this program rather than be expelled. So why is she back?

Amanda is close-mouthed and will not confide in Vance yet is in a constant standoff with her father. Vance feels like he’s landed in a snake pit and doesn’t know how to handle things or if he should even try. For him, being back in town reminds him of transgressions on his part when he was young, which does not bode well with his conscience.

Vance has no accomplishments he can be proud of or a family of his own. An argument between the brothers has Vance contemplating his life and actions.

“Now in the hallway, he can’t help recalling Craig’s words—side-show, pathetic, reckless—and, of course, that Vance doesn’t care about anyone else. Craig is an asshole, he thinks, and moreover, he’s wrong. Vance’s problem isn’t that he doesn’t care enough, but that he cares too much.”

With Amanda, the niece he loves as if she were his own, he feels pain at his inability to connect with her and help her through a tough period.

“And Amanda: he’s been too timid, too afraid to open his eyes and see what’s been staring him in the face all along. He should have guessed that very first morning—her pale, swollen face, the look of despair. He should’ve known that look.”

Told in the diverse voices of several characters, one cannot help but empathize with the differing situations while getting to the crux of each one’s concern.

This visit back to his roots not only has him reflecting on his current situation but also his actions throughout the years. He recognizes it’s time to take stock and change his ways. His brother and family are all he has, and he understands they need him as much as he needs them. Contemplation runs deep, making this a thought-provoking read.

“There’s a flaw deep inside him, a defect, a hold. There’s no other explanation. This is something he’s always known but only rarely, so very rarely, had the courage to admit.”

All families suffer from some dysfunction or problems, and this novel is sure to open many eyes. Filled with angst and apprehension, this presents the realistic insight into modern predicaments, yet demonstrates things can change and families can mend.