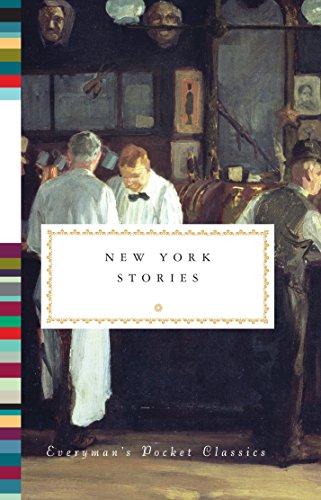 Everyman’s Library asserts that its purpose is to publish “distinguished classics” and “to make available literature that would appeal ‘to every kind of reader.’” In many ways, Everyman’s collection, New York Stories, achieves this goal in that it includes stories from more than the last 100 years on a variety of aspects of New York and that are written by both high-brow and more populist writers; however, the collection also lacks sufficient diversity, which does not truly reflect one of the most multicultural cities in America.

Although New York Stories includes works that span from 1899, such as Edith Wharton’s wonderful short story, “A Cup of Cold Water” up to Amy Hempel’s 2005 story, “Reference #388475848-5,” a large number of the tales in this collection—including those of John Cheever, Shirley Jackson, Truman Capote, and Jeanne Stafford—were published in the late 1940s, particularly in magazines like the New Yorker.

Many of the other stories in the collection were published in the decades immediately before or after the 1940s, with none from the 1920s, 60s or 70s, and thus the collection omits quite a few time periods and perspectives on New York. Even William Maxwell’s story, “The Thistles in Sweden,” which was also first published in the New Yorker in 1976, takes place in New York of the 1950s. The collection could embrace authors from a broader time span and different eras that might include a Harlem Renaissance writer such as Jessie Redmon Fauset or Nella Larsen, Grace Paley, or even go back to the mid-19th century with a tale by Herman Melville.

To its credit, New York Stories is comprised of tales that illustrate the lives and predicaments of characters from different socio-economic groups including Edith Wharton’s “A Cup of Cold Water,” Willa Cather’s “Paul’s Case,” Damon Runyan’s “Social Error,” Bernard Malamud’s “The Magic Barrel,” Katherine Ann Porter’s “Theft,” and Jean Stafford’s “Children are Bored on Sunday.” There are also a number of fine stories about naïve tourists or Midwestern transplants to New York such as John Cheever’s “ O City of Broken Dreams,” O. Henry’s “The Making of a New Yorker,” Shirley Jackson’s “Pillar of Salt,” and Truman Capote’s “Master Misery.”

While New York Stories includes two great contemporary pieces about immigrants’ experiences in New York, “New York Day Women, “ by Edwidge Danticat and “Negocios,” by Junot Diaz, it lacks tales about immigrants from the turn of the 19th to the 20th century and the early 20th century, time periods during which large waves of immigrants came to America, most of whom arrived in New York City. Stories by Anzia Yezierska or Henry Roth, for example, would reflect the immigrant experience in early-twentieth-century New York.

Finally, the writers represented in New York Stories are too white and by no means reflect the racial diversity of New York City. With the exception of James Baldwin’s outstanding story, “Sonny’s Blues,” published in 1957, every story in the collection predating Danticat’s 1995 story, is written by a white person. Again, this collection would benefit from a work by a Harlem Renaissance writer or a more contemporary work by Gish Jen, Lan Samantha Chang, or Paule Marshall, to name a few.

Despite its omissions, New York Stories also has many nicely crafted, interesting, and engaging inclusions that together depict a multi-faceted view of New York. Its beautifully designed book jacket and collection of many well-written, engaging, and interesting short stories, make this a worthwhile collection for good literature and New York lovers alike.