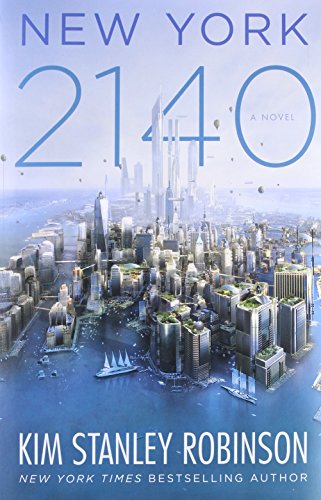 “New York 2140 is a book brimming with positivity, humor, and intelligence.”

From the pen of prolific science fiction author Kim Stanley Robinson comes an epic tale about a year even worse than 2020. New York 2140 tells the story about a submerged New York, a SuperVenice, the capital of capital. Years after the Second Pulse, half of Manhattan Island remains under water. Unaffected by ecological disasters and economic catastrophes, the One Percent live in superskyscrapers. Everyone else survives one day at a time in reclaimed high rises. Told with a variety of first- and third-person narration, Robinson offers a group portrait of a radically re-imagined Big Apple. Published in 2017, New York 2140 provides necessary escapist reading in this age of the Coronavirus and catastrophic human incompetence.

The locus of activity in this future New York City is the MetLife Tower. The inhabitants include Franklin Garr, a “quant” working at an investment firm. A duo called Mutt and Jeff, living as stowaways of sorts, rent-free, in a temporary shelter. Gen, an NYPD detective, a fellow tenant, is called into action when Mutt and Jeff mysteriously disappear.

Other characters include: Vlade, the super; Charlotte, an attorney; Amelia, a social media star and environmental activist; and Stefan and Roberto, troublemakers and treasure hunters. The disappearance of Mutt and Jeff triggers a series of events that might place the MetLife’s residents in jeopardy. Who is this anonymous buyer bidding to take over the MetLife building? Is this related to Mutt and Jeff’s disappearance?

Among all these various perspectives are chapters labeled “a citizen.” These chapters function as periodic interruptions to the main action. Acting as a Voice of God at times, at others like a Wikipedian wise-ass, a citizen offers infodumps, rants, histories, and scientific explications. In one such chapter, a citizen gives a lengthy explanation of climate change on Antarctic ice. (Robinson is well-versed on this topic, putting his knowledge and experience on the frozen continent to good use. He travels resulted in the 1997 novel Antarctica.)

One of the wonderful things about Robinson’s stories are the lack of villains. With the novel’s many voices come many different (and opposing) perspectives. Franklin Garr’s first-person narrations elucidate his numbers-worshipping uber-capitalist fanaticism. Amelia is an environmental activist who believes in saving every polar bear she can from extinction. But this activism is tempered by pragmatism rather than ideological extremism.

When her actions become the target for an ecoterrorist group, her opinion of their dogmatism is harsh. “No one gets to drive the polar bears to extinction just because they’ve got some crazy idea of purity. It isn’t right. Purity my ass. The bears have priority over a creepy, stupid asshole idea like that.” This same kind of toxic idiocy is seen today by fanatical individuals dedicated to “personal freedom” refusing to wear a mask during a global health crisis. That’s not fighting for freedom, that’s the height of dumbassery. Robinson sees purity just as destructive as “too big to fail” capitalism.

New York 2140 is many things, a cornucopia of genres. Amelia’s transporting polar bears in her airship makes it an adventure novel. Stefan and Roberto engage in a treasure hunt for lost gold. Franklin Garr’s internal monologues humanize a finance sector master of the universe, what would otherwise by a cardboard cut-out from an Ayn Rand remedial potboiler. Robinson makes Garr into a flawed ambitious anti-hero, a man with good ideas and bad principles. Mutt and Jeff offer dialogues peppered with philosophical, political, and economic ideas. Equal parts vaudeville comedy and post-apocalyptic gallows humor. (Snowpiercer meets Beckett’s Endgame.)

Despite 2020 being a dumpster fire of a year, New York 2140 offers escapist fun, political anger, and intelligent workarounds to a global catastrophe. But even as the ending has characters “living happily ever after,” Robinson throws some cold water on the heroes’ joyous celebration. “So sure, a leftward flurry of legislation got LBJed through Congress in 2143, but there was no guarantee of permanence to anything they did, and the pushback was ferocious as always, because people are crazy and history never ends, and good is accomplished against the immense black-hole gravity of greed and fear.” But even with these odds and a fanatical opposition, New York 2140 is a book brimming with positivity, humor, and intelligence. More of that, please.